The American Revolution was the largest war of the colonial era in the New World, and the second largest conflict ever to be fought on American soil.  Over a dozen major battles were fought during the war, and most of the largest and most important battlefields have been preserved as either national or state historic sites.  Some of the battlefields, notably Yorktown, are among the most popular destinations in the National Park system.  From Massachusetts to South Carolina, millions of visitors come each year to pay tribute to those who fought for freedom, at the sites of some of the revolutionary’s greatest victories. 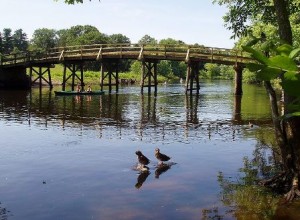 On April 19, 1775, the opening shots of the American Revolution were fired at the Battle of Lexington and Concord.  It began when a sizeable British force marched out from Boston to seize arms and supplies being stored at Concord by the Massachusetts militia.  Local Minuteman volunteers, warned by Paul Revere, swarmed out from the surrounding countryside to meet them.  The two sides skirmished twice, first at Lexington and then Concord.  Not expecting this fierce resistance, the British were forced to withdraw and fight their way back to Boston, taking nearly three hundred casualties in the process.

Minute Man National Historical Park consists of a collection of sites spread out along Battle Road Trail where the engagement took place.  Sites include the North Bridge at Concord where the Massachusetts militia rallied to stop the British advance; and the Paul Revere monument, marking the place where the famous silversmith was captured.  Also nearby is Lexington Battle Green, where the first shots were fired, but this is not part of the park itself.  The National Park Service maintains a visitor’s center near the North Bridge site. 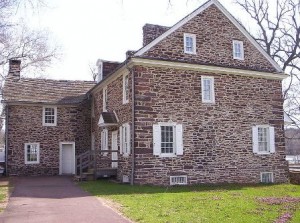 The Battle of Trenton was arguably the greatest American victory of the war.  The Continental army under Washington, on the verge of collapse after its disastrous campaigns in New York and New Jersey, rallied outside of Trenton on Christmas Eve 1776.  In one of the greatest military achievements of all time, the Americans crossed the Delaware River and took the garrison of Hessian mercenaries completely by surprise.  The Americans met almost no resistance, and within a few hours there were nearly a thousand Hessian casualties, compared to two dead and five wounded Americans.  Thanks to this victory, the Americans received the morale boost and supplies that they needed to make it through the brutal winter. 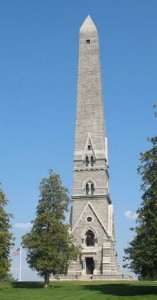 The Battle of Saratoga was a series of engagements in upstate New York which effectively turned the tide of the American Revolution in the northern colonies.  In an effort to divide New England from the rest of the colonies, a British force under John Burgoyne invaded the Hudson Valley from Canada.  After victories at Ticonderoga, they were met by fierce American resistance at Saratoga.  The first battle took place on September 19 at Freeman’s Farm, and was an inconclusive victory for the British.  The second battle took place at Bemis Heights on October 7 and was a decisive American victory.  The Battle of Saratoga ended the British offensive in the north and encouraged France to enter the war on the American side.

The Saratoga National Historic Park is located along the Hudson River just outside of Saratoga Springs and incorporates several local sites associated with the battles.  Among the highlights of the park are the Schuyler House, home to American Revolution general and hero Philip Schuyler; the Boot Monument, which honors Benedict Arnold’s contribution to the battle; and the Saratoga Monument, an obelisk-like structure marking the site of Burgoyne’s surrender.  The Saratoga National Historic Park is run by the National Park Service.

The Battle of King’s Mountain marked the turning point of the American Revolution in the south and, along with the subsequent Battle of Cowpens, the beginning of the end for the British.  After a string of defeats, a disheartened band of American militia was confronted by a superior force of Loyalist militia.  The Americans managed to completely outmaneuver their opponents, and after an hour long battle the entire enemy force of over a thousand men was killed, wounded or captured.  King’s Mountain was the largest engagement of the war to be fought almost exclusively but militia on both sides.

King’s Mountain National Military Park is the largest Revolutionary War battlefield site in the south.  It is part of the Overmountain Victory National Historic Trail, which marks the route along which the American militia from Tennessee to South Carolina along which the Patriot militia gathered for the battle.  A trail through the park connects most of the important places associated with the battle.  The main site of the engagement is marked by a commemorative obelisk.  Patrick Ferguson, who commanded the Loyalist militia, is buried in the park.  Kings Mountain National Military Park is run by the National Park Service and is adjacent to Kings Mountain State Park. 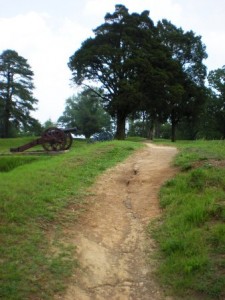 The Siege of Yorktown in the Autumn of 1781 was the last stand of the main British army in the American colonies.  After the collapse of their ill-fated southern campaign, the remains of the British force under General Cornwallis was forced to withdraw to Virginia.  They made camp at Yorktown to await supplies and reinforcements.  Instead, they found themselves trapped by a combined American-French army and a naval blockade.  After a siege that lasted nearly a month, the British surrendered on October 19.  Over eight thousand British soldiers were taken prisoner.  This battle effectively ended the war, and American independence was formally recognized two years later under the Treaty of Paris.

Colonial National Historic Park is actually a series of prominent colonial-era sites in the Hampton Roads which includes Historic Jamestown and parts of Colonial Williamsburg. Because of its proximity to these other popular destinations, Yorktown is the most visited Revolutionary War battlefield in America.  It is also one of the best preserved, with much of the British earthworks restored in recent decades.  On the site is the Nelson House, where general Cornwallis had his final headquarters.  The site is run by the National Park Service.