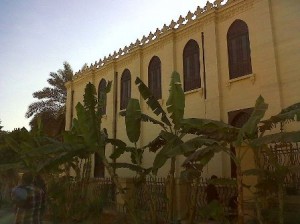 The Ben Ezra Synagogue is one of the surviving remnants of the once great Jewish community of Egypt.  A synagogue has stood on this spot since the 9th century, more than a hundred years before the Fatimids made Cairo their capital.  Because of the relative security of the Jews in Egypt, Cairo became one of the biggest repositories of Jewish knowledge during the Middle Ages.  In the 1800s a long-abandoned storage room in the synagogue was found to contain literally hundreds of thousands of Jewish documents.  This warehouse, known as the Cairo Geniza, is one of the greatest literary discoveries of all time, and its contents have made their way to museums and libraries throughout the world.  Although few Jews now remain in Cairo, the Ben Ezra Synagogue and Geniza are among the most visited and treasured Jewish sites in Egypt.  The Ben Ezra Synagogue is part of the Historic Cairo UNESCO World Heritage Site.

The Jewish relationship with Egypt is extremely ancient and complex, dating back nearly four thousand years.  Ancient Israel and Egypt probably exchanged ambassadors as early as the period of the Judges, and there were certainly Jewish settlements there, such as the one at Elephantine Isle, by the time of the Captivity.  The Jewish community of Egypt began to grow substantially in the wake of Alexander the Great’s conquests, when Jews began to spread out into the Greek-speaking world in general.  Many settled in coastal cities such as Alexandria and Cyrene as part of a massive colonization effort by the Ptolemic pharohs.

By the Roman era, Egypt had one of the largest Jewish communities in the world, accounting for as much as ten to twenty percent of the regional population.  It reached its height during the days of Philo, the renowned Jewish scholar, who devoted his life to the reconciliation of traditional Jewish teachings and classical Greek philosophy.  Philo was famous throughout the Roman Empire, and even served as an ambassador from the Egyptian Jewish community to the emperor Caligula.  However, the relatively good relationship between Egypt’s Jews and Rome collapsed following the Jewish Revolts in Judea at the beginning of the 2nd century AD.  In Alexandria alone virtually all Jews were killed or driven out by Trajan in 117.

The Jewish community of Egypt received new life following the arrival of the Islamic Caliphate.  Jews became established in Fustat, now part of Old Cairo, around the same time as the Muslims arrived.  In the year 882 AD, Abraham ben Ezra, a Jewish native of Jerusalem, purchased a plot of land for the construction of a synagogue.  At the time of the purchase, the land was closer to the banks of the Nile, and according to local tradition, it was the spot on which the infant Moses was found amidst the reeds by pharoh’s daughter.   A synagogue was constructed on the site which has, at least in part, survived to the present day.

At some point in the Middle Ages, a geniza, or warehouse for old books, was established at the Ben Ezra Synagogue.  By the time of the Crusades, the collection was considerable.  Maimonides made the synagogue his base of operations in Egypt so that he could have access to its immense collection of writings.  Strangely, the collection became forgotten during the Ottoman period, only to be rediscovered in the 1800s.  It was then that Solomon Schechter, a future president of the Jewish Theological Society of America, went to Egypt to study the find.  Recognizing its historical value, he had most of the collection removed to England and America.  The timing was good.  In the early 20th century, Egyptian reaction to the Zionist movement led to a mass departure of Jews from Cairo after World War II.  Although few members of Egypt’s Jewish community remain, the synagogue and geniza have been maintained and are still in use.

The Ben Ezra Synagogue dates back to the 9th century, but it has been rebuilt and renovated on numerous occasions.  It was last restored in the 1980s and is currently maintained as a national historic site.  Architecturally it is an unusual but harmonic mix of Byzantine, Egyptian and Islamic styles.  The main sanctuary is a long, narrow building with a tall ceiling supported by a double row of columns.  The interior is noteworthy for its beautiful marble fixtures and tilework.

The geniza collection was discovered in the synagogue’s attic.  The geniza probably accumulated documents for at least five centuries before being abandoned, and the collection included everything from religious texts to personal letters to a large assortment of Passover Haggadahs.  Fortunately no one ever got around to actually destroying them, and nearly two hundred thousand documents were still there when Solomon Schechter arrived.  Thought the vast majority of the collection has since been removed, the geniza’s history is commemorated at the Library of Jewish Heritage in Egypt located next door.

The Ben Ezra Synagogue is located in Old Cairo, on the south side of the modern city.  This area, once known as Fustat, was the original Arab-Muslim capital in Egypt.  As of this writing, no further visitor information was available for this site.  Web: www.genizah.org (official website)

When the geniza collection was removed in the 19th century, it was sent first to the Cambridge University Library in England.  When Solomon Schechter received his appointment to head up the Jewish Theological Society of America in New York, he took some of the best pieces of the collection with him.  Most of the Geniza’s books and writings are still housed in these institutions in Cambridge and New York.