Few continents fire the imagination of the traveler as much as Europe. Every year, millions of visitors from around the world descend on the heart of Western Civilization, intent on exploring its thousands of years of history and culture.  And no trip to Europe is complete without visiting at least one historic church, and there are thousands to choose from.  The problem is, fewer than two dozen churches entertain the bulk of visitors.  Subsequently these are expensive and crowded.  More importantly, and ironically, they are often not even the most worthwhile churches to visit.  So before popping in to St. Peter’s Basilica, Notre Dame Cathedral or Westminster Abbey, consider some of these amazing alternatives in Europe’s most popular cities:

Basilica of St. Paul Outside the Walls 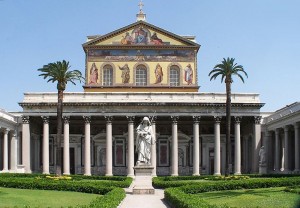 Basilica of St. Paul Outside The Wall (wikipedia.com)

When it comes to historic churches, no city on Earth tops Rome.  As home to the Roman Catholic Church since Roman times, the city has amassed a collection of religious relics unrivaled in Christendom.  Countless visitors come every year to gawk at the world’s largest church, St. Peter’s Basilica, and the Renaissance masterpieces that decorate the adjacent Sistine Chapel.  Some pilgrims might make it across town to the Basilica of St. John in order to climb the holy stairs.  But these are just two of Rome’s seven official pilgrimage churches, most of the rest of which are routinely ignored by visitors to the city.

Of greatest interest to the hard core Christian traveler is almost certainly the Basilica of St. Paul Outside the Walls.  Located on the south side of Rome, and generally off the beaten path of most tourists, this church was built on the site of Paul’s tomb, with parts dating back to the 4th century.  An excavation in 2006 discovered a Roman-era sarcophagus with Paul’s name on it.  However, it has yet to be opened and examined. 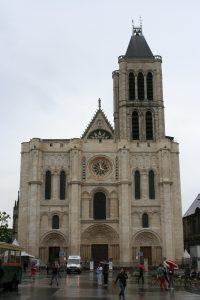 Paris is home to what is claimed to be the world’s most visited church: Notre Dame Cathedral.  This is not a surprising claim considering it is located in the dead center of Europe’s most visited city.  It swarms with tens of thousands of visitors every day, many who wait for hours to climb up to its famous bell tower.  And then there is the Sainte-Chapelle, the Eglise Saint-Sulpice, and the magnificent white Sacre-Coeur on its hill top with spectacular views of the city.

But from an historic standpoint, the city’s greatest religious treasure is the Basilica of St. Denis.  This nearly forgotten 12th century church, utterly ignored by the tourist masses and Parisians alike, is tucked away on the north side of the city.  Buried here is virtually every king of France, including the 5th century Clovis I (who Christianized France) and Louis XIV (the Sun King), as well as Catherine de Medici, Marie Antoinette and many many others.  There are several saints buried here as well, including St. Denis and St. Louis. 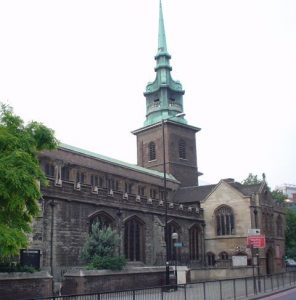 Church of All Hallows by the Tower (wikipedia.com)

London, often the first place in Europe to be visited by Americans and other foreigners from around the world, is awash in fantastic churches.  Few tourists to the city leave without visiting Westminster Abbey, where many English monarchs and cultural superstars are buried.  Also here is the magnificent St. Paul’s Cathedral, one of the largest churches in the world, and Temple Church, very popular since its prominent inclusion in the novel The DaVinci Code.

But just a stone’s throw away from the famous Tower of London is one of the city’s most overlooked religious treasures: All Hallows-by-the-Tower.  This church, the oldest in the city, was founded in the 7th century.  Unfortunately, much of the church was badly damaged by German aerial bombing during World War II.  However, elements of the original church survive, including an arch constructed by Saxons over 1300 years ago.  Two very prominent early Americans are associated with the church: William Penn, founder of Pennsylvania, who was baptized here; and John Quincy Adams, president of the United States, who was married here.

Church of Our Lord in the Attic 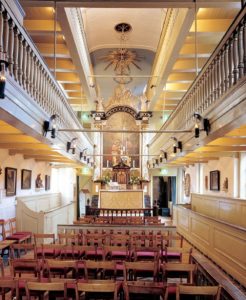 Church of Our Lord in the Attic (wikipedia.com)

Amsterdam, although very popular with foreign tourists, is not exactly a heavy hitter when it comes to historic churches.  The city’s most visited church is the Oude Kerk (Old Church), a 13th century building that is the oldest surviving structure in the city.  It is certainly seen by many visitors by virtue of its location at the heart of Amsterdam’s red light district.

But just a few blocks away to the north, and wasily overlooked, is the intriguing Church of Our Lord in the Attic.  This church was constructed in secret at a time when Catholics could not openly worship in the Dutch Reformed Netherlands.  The church was literally built out of several gutted floors in the upstairs of an old canal house in the 1660s.  In later years, when Catholics were once again allowed to freely worship in Amsterdam, Our Lord in the Attic became unused and in the 19th century was converted into a museum. 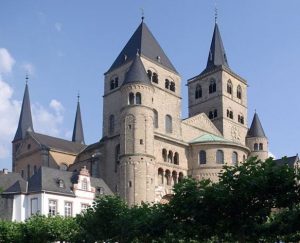 This final entry is a little different than the others, largely because Germany doesn’t have a single favorite city (it has many equally popular tourist spots).  As a nation Germany has many great churches, especially in the Rhine region, and by far the most popular is the Cathedral of Cologne.  This immense church, which for many years was the world’s tallest, is home to the popular but dubious Shrine of the Three Magi.  Cologne Cathedral by far draws the most visitors of any church in Germany.

However, there are considerably more historic churches in the Rhine region, and perhaps the best of these is the Cathedral of Trier.  Trier Cathedral is the oldest church in Germany and one of the oldest in the world.  It was founded in the early 4th century as the official church of the capital of the Western Roman Empire, and was gifted with several treasures brought back from the Holy Land (including the skull of St. Helena).