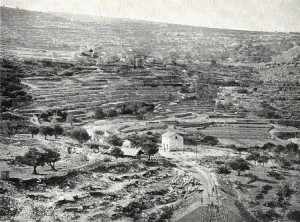 Ruins and Terraces on Betar (wikipedia.com)

The fortress of Masada has long been honored as the place where the Jewish rebels of the Great Revolt made their final, suicidal stand against the overwhelming forces of the Roman army.  However, it is a mistaken belief that Masada was the last vestige of a free and independent Judea.  That honor technically goes to the Betar Fortress, the site where the Jews made their last stand against Rome during the Bar Khokba Revolt more than sixty years after Masada fell.  The siege of Betar at the end of the Bar Kokhba revolt was much greater and destructive than that of Masada, and little remained standing when the Romans were through with it.  What is left can be found in the modern-day Palestinian town of Battir.  Little visited or remembered, the Battir Fortress deserves perhaps a little more attention and respect than it currently gets.

When the Great Revolt ended at Masada in 73 AD, control of Jerusalem passed to the Romans and the Great Temple was laid waste.  However, the people of Judea however lived to fight another day.  The loss of their ancient capital, their holy places and their freedom was a situation that the surviving Jews could not bear.  Within a few decades rebellion was again in the air.  In 115 AD, many conquered peoples in the eastern provinces, including the Jews, rose up in open revolt while the Roman army was preoccupied fighting a major war against Persia.  But these uprisings were suppressed a few years later after the war with Persia ended.

This relatively minor rebellion showed the Jewish leaders that there was still the strength and will left to fight against Rome.  About a decade later, a new Jewish leader, Simon bar Kokhba, rose to prominence in Judea.  A charismatic man and astute military leader, bar Kokhba was hailed by many of his Jewish contemporaries as the Messiah they had been waiting for.  This declaration alienated the Christians, who at that time were still considered by many as a Jewish sect, and who might otherwise have supported the coming war against Rome.  Nevertheless the vast majority of Jews supported the idea of yet another revolt, perhaps moreso even than those that supported the Great Revolt of the 1st century AD.

Simon bar Kokhba took his time carefully planning the revolt.  By the time it started he was clearly more prepared than the Zealots had been in 66 AD.  When the revolt broke out in 132, the Jews caught the Romans completely unprepared.  The size and scope of the rebellion were much larger than in the Great Revolt, and the Romans suffered enormous losses before they were able bring the situation under control.  It is believed that the entire 22nd Legion was annihilated by Jewish freedom fighters.  But then the Romans countered by assembling what might have been the largest army in the history of the empire.

In the end, the Bar Kokhba Revolt ended in much the same way as the Great Revolt did.  Jerusalem was retaken, and the surviving rebels retreated to a hilltop refuge in the south, this time the Betar Fortress.  Unlike at Masada, however, the rebels maintained a strong army which fought to the very end.  The result was one of the most prolonged and terrible battles in the history of Rome.  Thousands of soldiers on both sides died before it was over, and possibly tens of thousands of Jewish civilians as well.  According to legend, so vengeful were the Romans after Betar that the Jewish dead were not buried for nearly two decades.  The fall of Betar marked the final, complete end of ancient Judea and the official beginning of the Diaspora.

The modern-day town of Battir offers a glimpse of what the ancient Judean settlement and fortress might have appeared like at the time of the Bar Khoba Rebolt.  New, white-washed houses stand clustered on the steep hillside amidst the ruins of ancient stone walls that offer a commanding view of the valley below.  Although not nearly so intimidating as Masada, it is easy to imagine thousands of Jewish soldiers manning the fortifications in defiance against the Roman Empire.

The original Betar Fortress and the surrounding Judean settlements were largely destroyed by the Romans in the 2nd century AD.  However, remnants of the ancient site can still be found scattered throughout the modern town.  Some of the best remains of the original Judean settlement can be found in on and close to the hill-top.

The town of Battir is located less than ten miles southwest of Jerusalem, just a little bit west of Bethlehem.  As of this writing, there was no visitor information available for the Betar Fortress.  Web: http://travel Palestine.pl (official tourism website of Palestine)

Very little remains from the era of the Bar Kokhba Revolt.  However, explorations in several caves near the Dead Sea have uncovered caches of artifacts related to the revolt, including the Letters of Bar Kokhba which some scholars attribute to the rebel leader.  These are now located in the Shrine of the Book in the Israel Museum in Jerusalem.