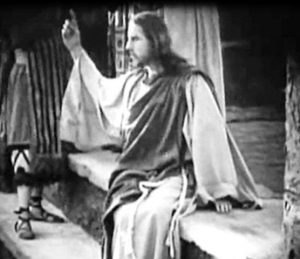 On September 5, 2016, Hollywood celebrated the 100th anniversary of the release of the movie Intolerance, considered by many to be the greatest (or at least one of the greatest) films of the Silent Era.  Produced and directed by D.W. Griffith as a sort of apology for his earlier film Birth of a Nation, which was heavily criticized for its racist overtones, Intolerance focused on the violent repercussions of prejudice and irrational hatred, with an eye towards reconciliation, especially between religious groups.

Because two of its four storylines are straight out of the Bible, Intolerance is usually included in the list of Hollywood’s great Biblical epics.  But what are the greatest?  The answer is, of course, highly subjective.  So, using only critics scores on Rotten Tomatoes as a guide, here are seven of the best.

A relic of Hollywood’s Silent Era, Intolerance is the highest rated Biblically-themed movies on Rotten Tomatoes.  True, the movie is only partially devoted directly to Bible stories, but the depiction of the Crucifixion of Jesus (part of the second story) is one of the most memorable ever filmed.  As a bonus, at least from a Biblical perspective, is the first story which concerns the destruction of the city of Babylon by the Persian Empire (this also featured one of the largest and most expensive sets ever constructed).  An additional story, the third, depicts the struggles between Catholics and Protestants during the Reformation Era. Intolerance is regularly ranked among the greatest and most influential films of all time, although it was a box office flop at the time of its release.

This greatest of all Biblical epics (it deals almost exclusively with Biblical material), this adaptation of the story of Moses and the Exodus is beloved by Jews and Christians alike. Directed by none other than Cecil B. DeMille and starring Charlton Heston as Moses, The Ten Commandments is both magnificently told and spectacularly filmed, with an Elmer Bernstein score that is one of the greatest soundtracks in Hollywood history.  Although some of the special effects don’t hold up particularly well by modern standards, the on-location filming in Egypt and cast of thousands give the movie an authenticity that is rarely seen in movies today. The Ten Commandments has been a staple of Passover week for decades.

One of the most financially successful Biblical epics of all time, the 1959 adaptation of Ben Hur is considered by many to be the gold standard against which all other such films are judged.  Directed by William Wyler and starring Charlton Heston as Judah Ben Hur, this “story of the Christ” is actually the story of a fictional Jewish prince, his tribulations, and his periodic encounters with Jesus of Nazareth.  Featuring some of the best filmmaking in the history of Hollywood, it includes (among other things) one of the most beautiful portrayals of the Nativity ever put on screen, and of course, the indescribably amazing chariot race. Ben Hur has since become a staple of both the Easter and Christmas seasons.

Technically an outlier of the Bible, Quo Vadis? was the first major and successful religious epic released in the golden age of such films in the 1950s and 1960s.  Directed by Mervyn LeRoy and starring Robert Taylor as Marcus Vinicius and Peter Ustinov as the emperor Nero, the film documents the persecution of the Christians of Rome during the reign of Nero, including the martyrdom of the Apostle Peter.  Focused on a fictional romance set against a reasonably accurate historical backdrop, it is another common Easter time film, though overshadowed by more popular titles.  It was both a critical and financial success at the time of its release.

One of two major adaptations of the gospels made in the 1960s (the other being The Greatest Story Ever Told), King of Kings is arguably the most popular film ever made about the life of Jesus Christ.  Directed by Nicholas Ray and starring Jeffrey Hunter as Jesus, it covers nearly a century of history, from Pompey’s sack of Jerusalem in 63 BC through Jesus’ last meeting with the Apostles.  While it sticks fairly closely to the Bible in most respects, it does feature some historical embellishments, including a rebellion sequence designed to add a little action to the film, for which it has received some criticism.  For many religiously devout film lovers, this is one of the definitive movies shown every year during Holy week.

Based on the 1955 novel of Nikos Kazantzakis, The Last Temptation of Christ is arguably the most controversial of all Biblical films. Directed by Martin Scorsese and starring Willem Dafoe as Jesus, it offers a “what if” look at the life of Jesus Christ, speculating what might have happened had Jesus forgone the Cross and instead lived and died the simple life of a mortal, married man.  The film generated so much controversy that it inspired protests around the world and even an arsonist’s attack on a theater showing the film.  Despite the positive critical response, the film was not well attended and only barely made back its budget.  Since then it has become something of a cult classic.

This modern adaptation of the story of Noah’s Ark is by far the best reviewed Biblical film of the last quarter of a century. Although not as well liked by audiences as it was by critics, Noah was also one of the biggest box office successes for a Biblical film in the last decade.  Directed by Darren Aronofsky and starring Russell Crowe as Noah, it has been both acclaimed for its focus on God’s relationship with man and other theological issues, and criticized for its significant departures from and embellishments on the actual Biblical story. Noah was banned in many Muslim countries due to its numerous contradictions to the teachings of Islam.

While the above Bible-themed movies are among the best Hollywood has to offer, there are others worthy of mention:

From the Manger to the Cross (1912 silent) – This depiction of the life of Christ, filmed on location in Palestine, was the first major motion picture adaptation of a Biblical story.

The Ten Commandments (1923 silent) – The original film adaptation of the story of Moses, also directed by Cecil B. DeMille, who would direct the remake more than forty years later.

Ben Hur (1925 silent) – The most expensive film made during the Silent Era, it was the first major box office hit for the newly formed MGM studios.

David and Bathsheba (1951) – One of the better films depicting the life of King David, it has been criticized for liberties taken with the original story.

Demetrius and the Gladiators (1954) – The sequel to the film The Robe, this story of Roman soldiers and gladiators accepting Christianity is generally considered to be superior to its predecessor.

Barabbas (1961) – This film depicts a fictional account of Barabbas, the thief who was freed by Pontius Pilate. It currently enjoys a 100% rating on Rotten Tomatoes, but only by a few critics.

The Bible: In The Beginning (1966) – The most ambitious Bible project ever undertaken, this epic film directed by Dino De Laurentiis was intended to be the first of many Bible movies, but only one was made (though it covers more than half of the Book of Genesis).

The Passion of the Christ (2004) – This controversial film directed by Mel Gibson endeavored to be the most faithful depiction of the last day of Jesus ever put on film, right down to the use of Hebrew and Latin dialogue. It was financially the most successful Bible film of all time.

A Quick Note On Methodology

For purposes of this list, all films with fewer than ten critics reviews on Rotten Tomatoes, regardless of score, were excluded, though some of the best are in the honorable mentions. In addition, the following areas were excluded:  movies made for television (eg Masada), animated movies (eg Prince of Egypt), musicals (eg Godspell) and adaptations in foreign languages.  Finally, all movies dealing with the Book of Revelation or the Apocalypse were excluded.