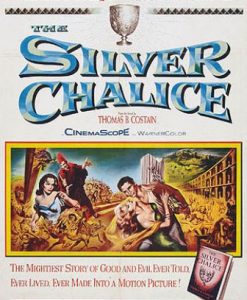 As we celebrate the 100th anniversary of D.W. Griffith’s silent masterpiece Intolerance, it is easy to remember the many great Bible epics that Hollywood has turned out over the last hundred years.  From the classics (The Ten Commandments, Ben Hur) to the controversial (The Last Temptation of Christ) to the contemporary (The Passion of the Christ), Hollywood’s greatest producers, directors and writers have endeavored to bring the Word of God to the big screen.  Some of these efforts have produced some of the greatest films of all time.

Other efforts, not so much.

For every triumph in the Biblical epic category, there have been more than a few flops, and some outright disasters. Unfortunately, this trend has been particularly pronounced in recent decades.  So, using only critics scores on Rotten Tomatoes as a guide, here are seven of the least well received.

The first major Biblical epic of the ‘talking’ era of film, The Sign of the Cross is a look at the early church in the days of Nero and bears a strong resemblance to the story of Quo Vadis. Directed by Cecil B. DeMille and starring Fredric March as Marcus Superbus, a Roman leader, it was filmed in the pre-Hollywood code era and was criticized (at least at the time) for its sexual content and nudity.  Part of DeMille’s Bible trilogy, which included the silent era adaptations of The Ten Commandments and King of Kings, The Sign of the Cross failed to live up to its predecessors at the box office.

This third major film adaptation of Lee Wallace’ famous novel is also arguably the worst. Directed by Timur Bekmambetov and starring Jack Huston as Judah Ben Hur, this movie attempted to improve upon (or at least match) the magnificence of DeMille’s 1959 adaptation, considered to be among the greatest films of all time (they might as well try to remake Gone with the Wind or The Godfather).  Despite a reasonably well shot chariot race sequence, Ben Hur (still in theaters) is a critical and box office disaster, and will soon be relegated to the ‘what were they thinking’ department.

This adaptation of the story of Moses updates the tale into a modern-style sword and sandal quasi-action film. Directed by Ridley Scott and starring Christian Bale as Moses, this massive undertaking incorporates additional historical background into the Bible material, including a war with the Hittites.  Audiences regarded Exodus as more of a blockbuster event film release as opposed to a Biblical epic, which would explain the movie’s impressive box office success despite being generally panned by both critics and audiences.

Following in the footsteps of the mega-success The Passion of the Christ, and adapted from the History Channel miniseries The Bible, this retelling of the entire story of the life of Christ from the Nativity to the Resurrection is something of a mixed bag.  Directed by Christopher Spencer and starring Diogo Morgado as Jesus, it was criticized for lacking in authenticity and an Americanized tone (especially compared to The Passion).  It bombed with critics but was generally well received by audiences, and did well at the box office.

This retelling of the story of Esther was one of the first major Bible films to be released in the ‘modern era’ following The Passion of the Christ in 2004.  Directed by Michael Sajbel and starring Tiffany Dupont as Esther (with a stunning cast list that included Omar Sharif, Peter O’Toole and John Rhys-Davies), this film simply didn’t gel with critics (though audiences and religious groups generally liked it).  The story was criticized for its introduction of non-Biblical elements and a poor script.  However, thanks to a solid foreign box office showing, the film did manage to make back its budget and a bit more besides.

An odd historic fictional film which tells the story of the creation of a vessel in which to preserve the Holy Grail, this movie is perhaps best remembered as Paul Newman’s first film. Disparagingly nicknamed Paul Newman and the Holy Grail, The Silver Chalice was directed by Victor Saville and stars Paul Newman as Basil, the Greek sculptor commissioned to construct the vessel.  Utterly vilified by critics, Newman himself hated the film and considered a lifelong embarrassment.  Although a box office flop, it did almost make back its mediocre budget, but not quite.

One of only a handful of major Biblical feature films to be release in the 1980s or 1990s, this biography of the life of King David is the worst rated religious film of all time.  Directed by Bruce Beresford and starring Richard Gere as King David, a handful of memorable moments (including the battle with Goliath) do not make up for what is generally considered to be a bad script that over embellishes the story and less than stellar performances.  Box office receipts failed to make back even its relatively modest production budget.

While the above Bible-themed movies are among the worst Hollywood has to offer, there are others worthy of mention:

The Robe (1953) – This movie tells the extra-Biblical account of the Roman soldier who won Jesus’ clothes in a dice game. While not a critical success, it has developed a very devoted cult following.

Esther and the King (1960) – One of the last Biblical epics of Hollywood’s golden age, Joan Collins could not save this forgettable movie.

The Greatest Story Ever Told (1965) – Released a few years after King of Kings, this adaptation starring Max Von Sydow has never gotten out of the shadow of its predecessor.

Color of the Cross (2006) – A new take on the story of Jesus, who is portrayed as a black man, had mixed reviews (not too bad by either critics or audiences), but made virtually no money at the box office.

The Nativity Story (2006) – In a world where Hollywood churns out Christmas movies by the truckload every year, it is amazing that this is the only full, exclusive portrayal of the Biblical story of the Birth of Christ. A minor success, it could not quite live up to The Passion of the Christ.

A Quick Note On Methodology

For purposes of this list, all films with fewer than ten critics reviews on Rotten Tomatoes, regardless of score, were excluded. In addition, the following areas were excluded:  movies made for television (eg Masada), animated movies (eg Prince of Egypt), musicals (eg Godspell) and adaptations in foreign languages.  Finally, all movies dealing with the Book of Revelation or the Apocalypse were excluded.