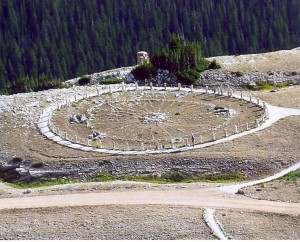 From New England to California, the United States has countless sacred Native American sites.  Most of these consist of burial areas, or are otherwise generally sacred to specific local tribes.  However, a few sites are acknowledged and revered on a wider scale, and probably the most important of these is the Bighorn Medicine Wheel.  This large rock formation is one of the oldest intact Native American sites, and one of the longest in continual use.  Unlike many other sacred Native American sites, the Bighorn Medicine Wheel is still regularly visited by pilgrims and is an active religious place.

The area dominated by the Bighorn Mountains in north central Wyoming has been home to Native American tribes for thousands of years.  Permanent settlement in the Bighorn area probably took place around the same time as in the neighboring Black Hills, in the last centuries of the pre-Columbian era.

The peak now known as Medicine Mountain was probably an important center of both political and religious life at this time.  At some point after 1000 AD, local tribes constructed a large medicine wheel near the top of the mountain.  This wheel, consisting of cairns and hundreds of carefully placed stones in a wide, spoked ring, was arranged for astronomical and other purposes.

The Bighorn Medicine Wheel has been difficult to date.  Astronomical evidence suggests that the wheel was probably built between 1200 and 1450 AD, although carbon dating indicates a period as late as the 18th century.  If the former dates are correct, this would make the medicine wheel one of the oldest intact pre-Columbian structures in the United States.

During the Colonial era, the area around the Bighorn Medicine Wheel became inhabited by tribes including the Lakota, Cheyenne, Crow and Arapaho.  Members of these tribes, especially the latter, recognized the religious importance of the site.  For the last few centuries, it has been in more or less continual religious use.  It is now one of the most important and popular Native American pilgrimage destination in the United States.

The Bighorn Medicine Wheel is one of the most significant Native American religious sites in the United States.  It is used regularly for prayer offerings and for vision quests.  Astronomically speaking it is slightly out of date, as alignments would have been better between 1200 and 1450 AD.  Nevertheless it still accurately tracks the Summer Solstice.

The wheel itself consists of hundreds of carefully placed white stones that from above look like an enormous wagonwheel.  Six cairn mounds, also covered in white stones, are located around the wheel.  Together the cairns and the wheel can be used to mark astronomical phenomenon.  The most sacred point at the center of the wheel is often the site of offerings, such as buffalo skulls.

The Bighorn Medicine Wheel is located in a remote area close to the northern end of the Bighorn Mountains.  The closest town is Lovell, fifteen miles to the west, while the nearest city is Billings over a hundred miles away.  The medicine wheel is an open site.  There is no cost of admission.  Web: www.sacredland.org/medicine-wheel (unofficial website).

There are other, less famous medicine wheels in the area, notably the nearby Medicine Wheel of Bighorn County.