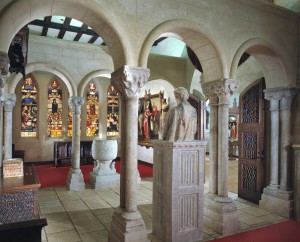 Bob Jones University is one of the best known Christian colleges in the South.  Among other things it is home to a hidden gem, the BJU Museum and Gallery, which houses an excellent collection of religious artwork and books.  Although also a secular art museum, it is famous for its variety of religious exhibits which include antique Bibles, Orthodox icons, Catholic paintings and even a recreation of the Jerusalem Chamber of Westminster Abbey in London.

Bob Jones Sr. was one of the most famous evangelists in American history.  Primarily active from 1900 to the 1960s, his ministry was arguably the first major evangelistic movement of the 20th century.  He was a pioneer in the use of radio to reach a wider audience, and by the 1920s his broadcasts were heard up and down the Eastern seaboard.  Jones remained an active evangelist almost until his death in 1968. 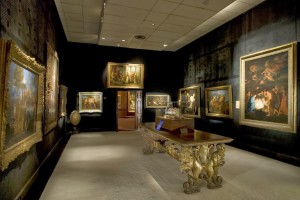 In 1925, Bob Jones was profoundly moved by the Scopes Monkey Trial, which essentially paved the way for Evolution to be taught in schools.  Concerned about the ever increasing secularization of American education, he decided to found a school as a Christian alternative to public institutions.  This went on to be Bob Jones University, and after moving from Florida to Tennessee, BJU found a permanent home in South Carolina in 1947.

Bob Jones University went on to become his greatest legacy.  Jones devoted his life to the school, spending much of his time and personal fortune to keep it going through lean times.  Throughout the last few decades of his life, one of his pet projects was to create an on-campus museum featuring one of the finest college collections of religious pieces.

The BJU Museum and Gallery has gone on to have some of the most impressive exhibits of any college outside of the major seminaries in the northeast.  Interestingly, the museum has drawn some criticism from Protestant groups due to its inclusion of Catholic and Orthodox pieces.  In recent years, the museum has hosted an annual Easter living gallery, where famous pieces of religious artwork are reenacted by living people.

The Bob Jones University Museum occupies its own building on the BJU campus.  Much of its art was acquired in the years following World War II.  There are many paintings by some of history’s great artists.  The museum’s best known piece is The Progress of Religion Revealed, seven large paintings originally created for King George III.  There is also an exhibit of Russian icons on display.

BJU is also home to the Mack Library, where many of the university’s other religious treasures are kept.  Among these is the Jerusalem Chamber, a recreation of a room from London’s storied Westminster Abbey.  It was in the Jerusalem Chamber in 17th century that the first edition of the King James Bible was prepared.  The BJU version is home to a collection of rare Bibles.

The BJU Museum and Gallery and the Mack Library are located in the middle of the Bob Jones University campus, approximately three miles northeast of Greenville.  It is open Tuesdays through Sundays from 2:00pm-5:00pm.  The cost of admission is $5.00.  Web: www.bjumg.org (official website).