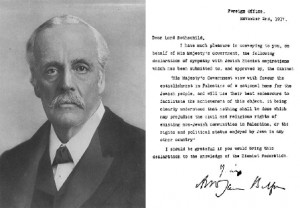 In 1917, at the height of World War I, the worldwide Zionist movement picked up momentum when the British Foreign Secretary, Arthur James Balfour, issued one of the most controversial documents of the 20th century: the Balfour Declaration.  Actually composed by Alfred Milner, a member of the British war cabinet, the Balfour Declaration formally acknowledged the support of the British government in the creation of a Jewish homeland in Palestine.  The ulterior motive for the declaration was to drum up support for the war among the world’s Jews, especially in Russia and America.  The Balfour Declaration had immense and unforeseen consequences that have resonated to the present day.  The original paper is kept in the British Library in London.

1917 was a pivotal year for the Entente powers in World War I.  After three years of fierce fighting, the outlook for victory had never been bleaker.  On virtually every front the British and French armies were stagnant at best, on the defensive at worst.  The collapse of the Russian Empire in the east freed up large German and Austrian forces for the Western Front.  While America had already declared war on Germany, few forces had yet been sent to Europe.  Desperate to keep the war going, they looked everywhere for allies and support.

Lord Alfred Milner, a competent and influential statesman and member of the war cabinet, decided an appeal to the Jews would be extremely useful.  He hoped that a show of support for a Jewish homeland in Palestine might encourage American Jews to put pressure on their government to send more troops to France more quickly; appeal to the many Jewish revolutionaries in Russia to keep the war in the east going; undermine the morale of Jews serving in the enemy armies; and encourage Jews in Palestine to take up arms against the Ottoman Empire.  On November 2, 1917, the Declaration was signed by Arthur Balfour, the British Foreign Secretary, and sent on to the Zionist Federation via Walter Rothschild.

The entire letter consisted of a short paragraph, with the key statement summed up in a single sentence:  “His Majesty’s Government views with favour the establishment in Palestine of a national home for the Jewish people, and will use their best endeavours to facilitate the achievement of this object, it being clearly understood that nothing shall be done which may prejudice the civil and religious rights of existing non-Jewish communities in Palestine, or the rights and political status enjoyed by Jews in any other country.”

The Balfour Declaration did indeed increase Jewish support for the war, but in the end it also created major headaches for the British Empire.  First, contradictory promises were made to the Arabs for their support against the Ottomans.  Second, the Muslims and to a lesser extent the Christians of Palestine were very unsettled by the agreement, and protests began almost immediately.  Finally, the Declaration only vaguely supported an unspecified homeland.  In the end, despite the unbelievably tangled diplomatic mess it created, the Balfour Declaration would ultimately lead to the creation of the modern state of Israel three decades later.

The original copy of the Balfour Declaration is kept among the special collections located in the British Library in London.  The British Library began as an adjunct of the British Museum in 1753, but became and independent institution in the 1970s.  The majority of the collection was removed to the new building on Pancras Road in 1997.

The Balfour Declaration is almost ridiculously simple in appearance.  A plain white piece of paper, Balfour did not even use formal stationary or letterhead.  It merely states ‘Foreign Office’ typed out at the top.  The Declaration is kept with other important government documents in the British Library.  Although it is not on display, it is possible to view the document with special permission.

The British Library is located on the north side of London in the Bloomsbury District.  While it is open to the public, there are restrictions on access to parts of the library, which may particularly impact foreign visitors.  In theory those with specific research requirements can view those documents and artifacts that are not on general public display.  The library is open daily from 9:30am-6:00pm, with later hours on Tuesday and shortened hours on the weekends and holidays.  Admission is free.  Web: www.bl.uk (official website)

London was a major center of both Jewish intellectualism as well as Zionist activity in the late 19th and early 20th centuries.  The Balfour House, the headquarters of the Zionist Federation of Great Britain and Ireland, is located here.  The Gravesite of Arthur Balfour is located in Lothian, Scotland.  London’s graveyards abound with some of the biggest Jewish names of the Victorian era.  The Gravesite of Benjamin Disraeli, the first Prime Minister of England of Jewish descent, is located in the St. Michael’s Church graveyard in the suburb of Hughenden.  The Ashes of Sigmund Freud, the father of modern psychiatry, are kept at the Golders Green Crematorium.  In the Bodleian Library at Oxford University, a few hours north of London, is the Diary of David Reuveni, one of the erstwhile Jewish Messiah’s of the Renaissance era.