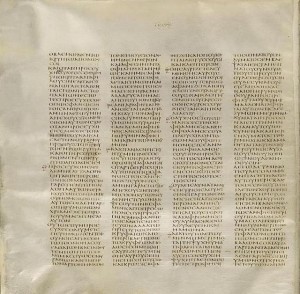 The British Library in London is one of the world’s largest repositories of books and knowledge.  It is not surprising to find, therefore, that its absolutely immense collection includes a number of extremely rare and priceless Christian writings; and among these may be the rarest and most priceless of all: the Codex Sinaiticus, the oldest complete copy of the New Testament in existence.  Reliably dated to the 4th century AD, it was probably commissioned by the emperor Constantine.  Also in the library’s collection are two perfect copies of the Gutenberg Bible, the oldest complete copies of the Bible in print.  Together these literary treasures of Christianity merit great interest from Christian visitors to London’s great library.

During the early centuries of the Church, the New Testament of the Bible was a work in progress.  By the time of the death of John the Evangelist, the last living man who had personally known Jesus of Nazareth, scores of books, gospels, letters and other writings concerning Christianity were circulating all over the Roman and Persian empires.  Early heretical movements such as Gnosticism and Marcionism served as a warning to early Church leaders that a recognized, standard collection of writings would be necessary in order to preserve Orthodox Christianity from fragmenting into a hundred splinter cults.  Evidence suggests that the canon of twenty-seven New Testament books that we are familiar with today probably began to coalasce sometime in the late 2nd century.  The exact date of formal canonization is unknown, though it probably occurred sometime after the Council of Nicaea in 325 AD.

Sometime between the years 325 and 360 AD, the Codex Sinaiticus was completed.  The codex, a Greek-language edition of both the Old and New Testaments, is the world’s oldest nearly-complete copy of the entire Bible.  According to one theory, it was one of fifty Bibles commissioned by the Emperor Constantine after his conversion of the empire.  At some point between the 4th and 7th centuries, the Codex Sinaiticus found its way to St. Catherine’s Monastery at the base of Mount Sinai, where it was kept in the monastery library collection for well over fifteen hundred years.

The Codex Sinaiticus remained in obscurity in that nearly-forgotten corner of Egypt until the mid-1800s, when Constantin von Tischendorf, a German theologian, discovered the venerable text during a pilgrimage to the monastery.  Immediately recognizing the treasure he had uncovered, he arranged to take away a portion of the codex for purposes of study.  In later years, at the behest of his sponsor Alexander II of Russia, he managed to acquire the remainder of the codex for the price of nine-thousand rubles.  It quickly became a prized possession of the National Library of St. Petersburg, where it was kept along with ancient copies of the Tanakh, the Koran and other important early religious writings.

Throughout the 20th century, additional investigations of the monastery library turned up additional sheets of the codex.  Virtually the entire book was recovered, though it was not all kept together.  In 1973 the bulk of the Codex was acquired by the British Library for the relatively bargain price of L100,000.  However, a few small portions remain in St. Petersburg, Russia; Leipzig, Germany; and at St. Catherine’s Monastery in Egypt.  Today the Codex Sinaiticus is considered the world’s singlemost important Christian document.  It is very likely that the codex will be used as the basis for a new edition of the Holy Bible in the coming decade.

The British Library began as a wing of the British Museum in the 19th century, but became an independent institution in the 1970s.  A massive new library building, located in London’s Bloomsbury district, now contains the bulk of the collection once scattered around dozens of smaller sites throughout the city.  It now houses an estimated twenty-five million volumes.

The Codex Sinaiticus is part of the library’s special collection.  Of the 419 existing pages and fragments, 347 can be found here.  This includes 199 pages of the Old Testament and 148 pages of the New Testament.  Most of the pages of the codex are in remarkably good condition given their age.  The two copies of the Gutenberg Bible kept at the British Library are among twenty-one in the entire world which are considered to be in perfect condition.

The British Library is located in Bloomsbury in the north of London, approximately a mile and a half away from the major tourism clusters around Westminster the the City.  It is open daily 9:30 am to 6:00 pm, with later hours on Tuesday and shortened hours on the weekends and holidays.  Special permission may be required to view the codex or other documents in the special collections area.  Admission is free.  Web: www.bl.uk (official website)