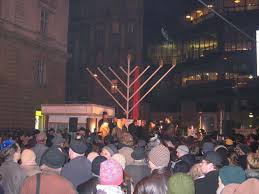 Of all of the Jewish peoples residing in Europe during the long years of the Diaspora, none have had quite so eventful a history as the Jews of Hungary.  Located at the crossroads of many empires, peoples and religions, no other group of Jews suffered as much virtually continuous persecution throughout their history.  By the same token, no other group of Jews in Europe resisted persecution so fiercely and successfully.  It is possible that these centuries of persecution and resistance helped to prepare the Jews of Hungary better than their neighbors for the horrors of the Holocaust.  It is therefore a fitting tribute to the Hungarian Jews that Budapest is home to the largest and most vibrant public celebration of Hanukkah in Europe.

The Jews of Hungary have a long and strange history.  It is believed that they have been around longer in Eastern Europe than in any other region, and that they are descendents of Jewish mercanaries who arrived from the south in Roman times rather than from the west in the Middle Ages.  Despite regular cycles of persecution, the Jews of Hungary more fiercely resisted oppression here than anywhere else.  This might explain why more Hungarian Jews survived the Holocaust than in any other place in Europe. 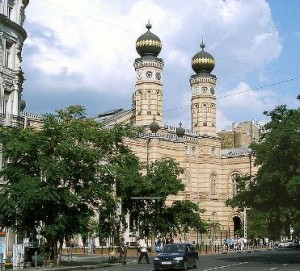 It also explains the zeal with which the Jews of Hungary celebrate Hanukkah.  For many, the celebration of the Festival of Lights is less about the miracle of the oil and more about aggressive resistance to persecution.  The annual street celebrations are still something of a work in progress.  Only a few decades old, the festivities seem to grow in scope every year.  Activities focus around the magnificent Dohany Street Synagogue, one of the largest and most beautiful synagogues in the world.

The Budapest Festival of Lights, also known as the Quarter6Quarter7 festival in honor of the city’s old Jewish quarter designations, is the unofficial celebration of Budapest’s 80,000 Jews.  In recent years activities have included everything from public ceremonies to organizing the world’s largest human menorah.  Unfortunately it has also drawn much attention from local neo-Nazi organizations.  As of this writing there was no official information about the festival.  The Dohany Street Synagogue is close to the historic center of the Pest district on the east side of the Danube River.  It is open daily at 10:00am (except Saturdays; closing times vary).  Admission to the synagogue is Ft600 and includes entrance to the Jewish Museum next door.  Web: www.synagogue.uw.hu (official website of the Dohany Street Synagogue)