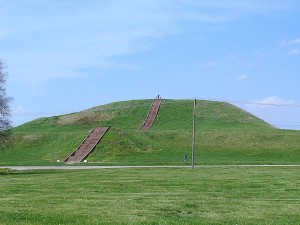 Native American tribes probably began traveling through the Mississippi region as early as 9500 BC, with evidence of large settlements in the area as early as 1200 BC.  Small woodland groups which permanently established themselves at Cahokia probably did so between 600 and 700 AD.  Mound building, a staple of the Mississippian era, began three to four centuries later.  By 1050 AD, Cahokia was the largest pre-Columbian Settlement in what is now the United States. 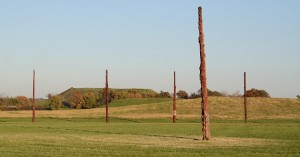 Cahokia reached its peak around 1100 AD, with 120 immense mounds covered with and surrounded by buildings and plazas.  Archaeological research has discovered evidence of a massive central plaza, wooden stockade defenses, ceremonial and burial areas, and buildings the size of a basketball court.

Over the next few centuries, Cahokia declined, almost certainly due to the exhaustion of local resources of food and lumber, climate changes and civil unrest.  By the time European explorers arrived in the area, the great civilization was long abandoned, and virtually all traces of the city were gone from the surface except for the mounds.  Only a few small groups of the Cahokia tribe, for whom the mounds are named, lived in the area, and these were probably not related to the mound builders.

Cahokia became of religious interest to Native American groups in the 20th century when several sites were identified.  These include what is believed to be the remains of the largest pre-Columbian temple ever built in the United States on top of the largest mound and a burial site which contains a large number of what were almost certainly Religious sacrificial victims.  Also of interest is a great circle of post holes that, when fitted with wooden posts, became an astronomical calendar known as Woodhenge.  Because of these discoveries and Cahokia’s cultural importance, the mounds are considered to be among the most sacred Native American sites in the United States.

The Cahokia Mounds site is massive, covering an area of six square miles.  Eighty of the known 120 mounds are still standing today.  The largest and most important of the mounds, known as Monks Mound, was the site of the settlement’s largest buildings.  These almost certainly included the residences of the leaders, as well what appears to be a substantial temple.  The Woodhenge astronomical circle, recreated with posts, is just west of Monks Mound.

The other most important mound, from a religious standpoint, is Mound 72.  This mound is the site of what is probably the most famous Native American burial ground in the United States.  Over two hundred skeletons have been unearthed here, including an elaborately buried chief, possibly a leader of the community.  Many of the remains are those of bodies which were ritualistically sacrificed, including some that had been buried alive.

The Cahokia Mounds are located on the Illinois side of the Mississippi River, approximately seven miles east of St. Louis.  The mounds are run as an Illinois State Historic Site.  It is open every day from May through October 9:00am-5:00pm; and the rest of the year Wednesdays through Sundays from 9:00am-5:00pm.  The suggested admission is $7.00 for adults, $5.00 for seniors, $2.00 for students and $15.00 for families.  Web: www.cahokiamounds.org (official website).

Of the many mound sites in the vicinity of St. Louis, almost all of the others have been absorbed or destroyed by modern construction.  One exception is the Sugarloaf Mound which was saved from destruction by the intervention of the Osage Nation, who recently purchased the site.