Millions of visitors flock to the British Isles every year, inundating the famous castles of England, Scotland and Ireland.  Countless tourists make their way to such iconic sites as Windsor Castle, Edinburg Castle, Blarney Castle, and the world’s most famous of medieval fortresses, the Tower of London.  But what about Doune Castle in Scotland?  Or Trim Castle in Ireland?  Certainly Alnwick Castle in Northern England is one of the most seen castles of all time, and yet relatively few people have visited it.  Chances are, if you are a movie buff, you have seen these and other photogenic castles as well.  Here are five of Britain’s most recognizable, yet least visited, castles: 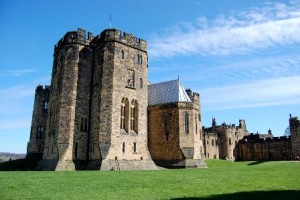 Alnwick Castle, in Northern England, is a well-preserved, picturesque castle that has been in nearly continuous use for almost a thousand years.  Its stately walls and impressive keep evoke images of the Scottish invasions of the Middle Ages; ferocious battles during the Wars of the Roses; and… broom flying lessons.  For all of its magnificent history, Alnwick Castle is now best known as a primary shooting location for the first two Harry Potter films.  Fans now come to see where Harry Potter first learned to handle a broomstick, and where Ron Weasley failed to safely land the flying car.  Movie fans who are slightly older may recognize the castle from such movies as Elizabeth (1998), Robin Hood: Prince of Thieves (1991) and Becket (1964).

Alnwick Castle was originally constructed in the 11th century to guard England’s northern border from the threat of Scottish invasion.  It witnessed, and survived, several battles during the Middle Ages.  Although much of the original castle has been preserved, Alnwick underwent major renovations in the 16th, 18th and 19th centuries.  Since 1945, the castle has been used as a school, though not for aspiring wizards.  Alnwick is still in use by the ducal family of Northumberland, who maintain its walls, towers and keep in excellent repair. 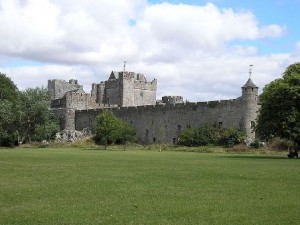 Cahir Castle is one of the oldest and largest castles in Ireland, as well as one of its best preserved medieval structures.  Cahir witnessed sieges several times in its history, perhaps most famously during the filming of the movie Excalibur (1981).  The castle was prominently featured in the movie’s most famous battle sequence, when the armies of Uriens and Leondegrance clashed over the right of Arthur’s succession to the throne.  Easily recognized are the places where the young Arthur’s exploits saved the day, including the moat where he was knighted in one of the film’s most moving scenes.

Cahir Castle was one of the last major fortifications built by the Irish prior to the Norman Conquest in the late 12th century.  Although it appears to be a moated castled, it actually stands on an island in the middle of the Suir River.  This excellent defensive position helped the castle to survive many wars, particularly in the 16th and 17th centuries.  While Cahir largely dates from the medieval period, it has undergone several expansions and renovations.  A popular highlight of the castle is a walk around the curtain walls where the Excalibur siege was filmed.  Cahir Castle is now managed by Ireland’s Office of Public Works. 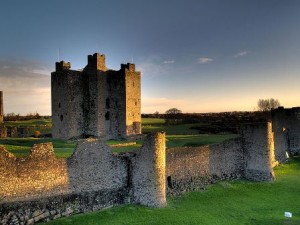 Trim Castle is generally acknowledged as Ireland’s largest, if not particularly well preserved, castle.  Built and expanded over the course of several centuries, the hodgepodge of styles did not deter the producers of the film Braveheart from using Trim Castle for a variety of outdoor shots.  It was most recognizably used as a stand in for the fortifications of the city of York, which was besieged by the Scots about half-way through the movie.  It was also the site of London Square, where the execution of Wallace was filmed.  Trim Castle also made a brief appearance in the World War II epic, The big Red One (1980).

Trim Castle largely dates from the 13th century.  In 1172 Trim was turned over to the de Lacy family, nobles from England who were appointed as Lords of Meath after the Norman conquest.  It was under the Normans that the relatively modest Trim Castle was vastly expanded to its present size.  Over the years it was used as a home to the Irish parliament as well as a mint.  Despite efforts in recent years, Trim Castle is still in various states of disrepair, and only parts are intact and open to visitors.  The castle is now managed by Ireland’s office of Public Works. 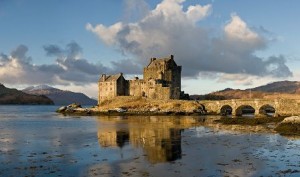 Nestled along the shore of Loch Duich, Eilean Donan Castle is regarded by many as one of the most picturesque in Scotland.  It is certainly idyllic enough to have been filmed in over a dozen movies and television shows.  It is perhaps most famous for its appearance in the cult classic Highlander (1985), where it was used as the home of clan MacLeod.  The real clan actually lived nearby, in Dunvegan Castle on the Isle of Skye.  It has also appeared in The Master of Ballantrae (1953), The World is Not Enough (1999) and most recently Elizabeth: The Golden Age (2007).

Eilean Donan Castle was originally built in the 13th century as a bastion against seaborne raiders.  It later became a prized possession of the northern Scottish clans, and was fought over several times, most famously between the MacKenzies and MacDonalds in the 16th century.  Its strategic position later made it a target of both Spanish and English interests, who between them laid waste to the castle in 1719.  Thanks to the efforts of Clan Macrae, who had occupied Eilean Donan periodically from 1511 onward, the castle was restored in the 20th century.  Eilean Donan Castle is now run by the Conchra Charitable Trust. 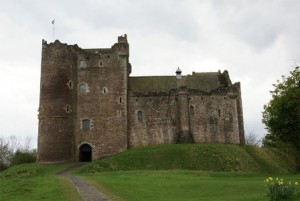 Doune Castle, outside of Stirling in Central Scotland, is a stately if grim structure whose motto should be, “Doune Castle…not a model”.  As the primary filming location for Monty Python and the Holy Grail, Doune may be the most famous castle in comedy history.  Virtually all of the movie’s castle scenes, both interior and exterior, were filmed here.  Fans of the Holy Grail now flock to the castle to see where the song and dance number, Camelot, was performed; to see where Launcelot slaughtered a roomful of wedding guests in order to rescue a fair maiden in his own particular idiom; and to see where French soldiers farted in Arthur’s general direction.  Doune Castle was also used in the MGM classic film Ivanhoe (1952).

Doune Castle was built in the late 14th century, and though it was originally intended to be much larger, the brooding hulk of the keep and enclosed courtyard are still impressive.  It was drawn into many of Scotland’s wars in the 17th and 18th centuries, and by the 19th century Doune was in a state of severe disrepair.  Renovations over the last hundred years have restored it nearly to its original state.  The main keep is surprisingly compact, and is considered to be an excellent example of Scottish military architecture of the late Middle Ages.  The site is now run by the Historic Scotland agency.