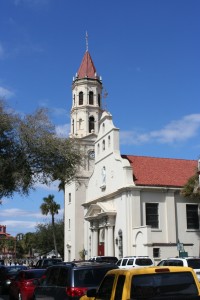 The Cathedral Basilica of St. Augustine enjoys an odd place in the history of the Roman Catholic Church in America.  While not the oldest cathedral in the United States, it is by far the oldest cathedral site in the United States.  Between the 16th and 18th centuries, the Spanish Empire tried numerous times to build a permament cathedral on the site, but were unsuccessful until well after the Cathedral of San Fernando was completed in Texas.  By the time it was finished, more than two hundred years had passed since the first attempt was made, making it one of the longest church building projects in American history.  Nevertheless it still enjoys the distinction of being America’s first Catholic parish.

Spanish conquistadors arrived in Florida in the mid-16th century, working their way as far north as St. Augustine.  This roughly marked the northern end of the Spanish Empire in the Atlantic, and to secure it a large colony was established.  Along with a fort, an early cathedral was constructed.  The work was fast and slipshod, and the result was less than stellar.  In 1586, the original structure was (probably thankfully) destroyed in a pirate raid led by Francis Drake. 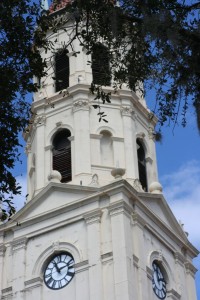 The Spanish colonists quickly went to work building a new cathedral.  This second structure, completed in just a few months, was probably even worse than the first one.  In 1599, the second cathedral also mercifully burned to the ground.  In the 17th century, funds were finally appropriated for a larger, more permanent structure.  Designed by better architects and built from more solid timber, this cathedral lasted for nearly a century before being burned down yet again, this time by a British raid in 1702.

Throughout the 18th century, several half-hearted attempts were made to build yet another cathedral, but these efforts were hampered by an apathetic congregation, misappropriation of funds and, for twenty years, temporary British rule of Florida.  Finally, in 1793, after the restoration of Spanish rule, construction began on a true, permanent masonry structure. 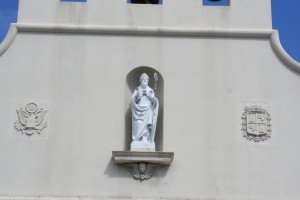 The Cathedral of St. Augustine was completed in 1797.  Ironically by then the St. Augustine colony had considerably dwindled.  The city and congregation did not stabilize and recover until after Florida was acquired by the United States in 1819.  In later years the cathedral became one of the great historic symbols of both St. Augustine and Florida.  In 1976 it was designated as a minor basilica, more than four hundred years after its first incarnation.

The Cathedral Basilica of St. Augustine actually had another fire in 1887, and although the original shell still stood, most of the cathedral as it exists today dates from restorations in the 19th and 20th centuries.  The neo-colonial building, the most prominent structure on the St. Augustine skyline, is known for its use of coquina stone, used during the reconstructions due to its fire-proof nature.  It is also known for its exposed belltower, unusual in Catholic church construction.  This was done so that its historic bells, including one believed to be the oldest in the United States, would be visible. 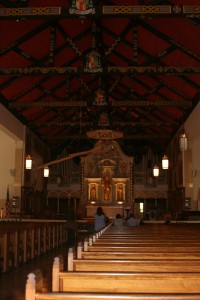 The cathedral interior is one of the most unique in the United States, specifically the celing.  During the 19th century reconstruction, a new timber-supported roof was installed, and the underside of the roof left exposed and painted a rich orange-red.  This gives the otherwise baroque interior of the church a touch of medieval splendor.

The Cathedral Basilica of St. Augustine is located in the heart of St. Augustine’s historic district, approximately thirty miles south of Jacksonville.  As of this writing no visitor information was available.  Web: www.thefirstparish.org (official website). 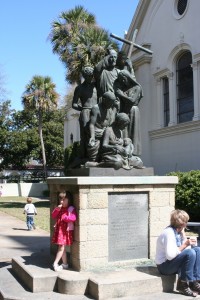 St. Augustine is home to several other historic Catholic sites, including the St. Benedict the Moor Church, one of the oldest African American Catholic churches in the United States; and the Prince of Peace Votive Church, to honor the city’s 400th anniversary.