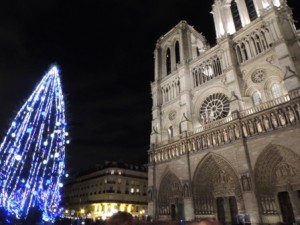 The Cathedral of Notre Dame de Paris is one of the most storied and famous cathedrals in history.  This is due in no small part to the literary achievements of Victor Hugo, who immortalized the edifice in his book The Hunchback of Notre Dame.  Because of this, and because of its location in the heart of Paris, millions of tourists flock to Notre Dame every year.  Strangely, most visitors to the cathedral are so awed by the famous stained-glass windows and the legions of guardian gargoyles that few are aware that Notre Dame is home to one of Christendom’s most famous artifacts: a piece of the Crown of Thorns, which is on display only a few days every year.  Thanks to its location at the heart of one of the world’s busiest cities, the Cathedral of Notre Dame de Paris receives more visitors every year than any other Christian site in France.  The cathedral is part of the Banks of the Seine UNESCO World Heritage Site.

The Cathedral of Notre Dame de Paris has a rich history more than worthy of its location in the heart of France’s capital city.  Paris was home to one of the first major cathedrals in France, St. Stepehen’s, built in the 4th century AD, which had served as the defacto royal chapel since the earliest days of the Frankish kingdom and the Merovingian dynasty.  By the middle of the 12th century, France had become one of the largest and most powerful Christian kingdoms, while at the same time its aging cathedral seemed less and less adequate to the royal dignity.  In 1160, the city’s bishop, Maurice de Sully, decided that a new cathedral was needed, and had the old one ignominiously demolished.  So grand were the plans for the new cathedral that the Pope himself came from Rome to witness the placement of the foundation stone.

The building of Notre Dame, one of the largest cathedrals yet constructed, was a marvel of engineering.  The bulk of the structure was completed in under a century, practically a record for the Middle Ages.  It included many new and reworked elements that would later come to define Gothic architecture.  By the time of its completion in the mid-14th century, the cathedral had already witnessed several major events, including the first meeting of the Estates General, the launching of the Third Crusade and a number of royal coronations.

Notre Dame de Paris was a major center of French religious life in the late Middle Ages, though the city’s occupation by the English during the Hundred Year’s War as well as other turbulent periods often saw its importance eclipsed.  As a bastion of Catholicism and of the status quo, Notre Dame de Paris was often a target of vengeful enemies, including the Hugenots in the 16th century and Revolutionaries in the 18th century.  On both occasions the cathedral was vandalized.  Because of this, by the time of the Revolution the cathedral was in an advanced state of disrepair.

Notre Dame’s last truly great moment in history came in 1804, when the Pope visited in order to crown Napolean Bonaparte as the Emperor of France.  This tremendous event notwithstanding, Notre Dame was quickly fading into historical and architectural obsolescence.  Everything changed in 1831, when Victor Hugo published one of his most famous works, The Hunchback of Notre Dame.  In the wake of this tremendously successful book, the people of Paris were overcome by a renewed sense of interest in the cathedral as a beloved symbol of their city, if not so much of a beloved religious site.  A massive restoration effort ensued, saving the cathedral from demolition.  It has been a precious municipal treasure of the city ever since.

The Cathedral of Notre Dame is literally the heart of the city of Paris and the nation of France.  Directly in front of the cathedral is a marker known as Point Zero, the place from which all distances in France are measured.  The cathedral’s looming towers and soaring pinnacle dominate the Ile de la Cite, the island in the Seine which was the ancient and medieval core of Paris.  The twin bell towers which flank the cathedral’s façade are its most recognizable features and, thanks to Hugo’s novel, are famous both for its massive bells and their fictional hunchbacked bellringer.  The exterior is also famous for its flying buttresses which, though not a new idea at the time, were constructed on a size and scale hitherto unknown in architecture.  And of course there are the cathedral’s memorable guardian gargoyles.

The interior of Notre Dame is a classic Gothic masterpiece, if a bit dark and gloomy.  The most popular features of the interior are the stained-glass windows, accounted some of the finest on in the world.  These include the famous Rose Windows, a trio of immense round windows located over the cathedral’s three main exterior portals and which appear like giant roses.  The cathedral’s primary bell, Emanuelle, is located in the south tower, while the four smaller Marie bells are located in the north tower where the Hunchback’s fictional residence was located.  The Crown of Thorns is generally kept in storage except for a few Fridays every year when it is on public display.

The Cathedral of Notre Dame de Paris is located at the very center of the city, on the Ile de la Cite, in close proximity to many of the city’s other major attractions.  The cathedral is open every day from 8:00am-6:45pm.  There is no charge for admission.  Web: www.notredamedeparis.fr (official website)

Paris is rich with spectacular Christian sites.  On the Ile de la Cite, just across from Notre Dame, is one of Paris’ other most popular churches, Ste-Chapelle.  Ste Chapelle once housed the Crown of Thorns, and is still home to impressive stained-glass windows and other treasures.  Also close by is the 7th century Hotel-Dieux, the world’s oldest hospital and one of the world’s oldest Church-founded institutions.  The 12th century St-Germain-des-Pres Church is the oldest church in Paris and one of the oldest in Northern France.  The white-domed Basilica Sacre-Coeur stands on the highest hill in the city and has been inspiring artists for generations.