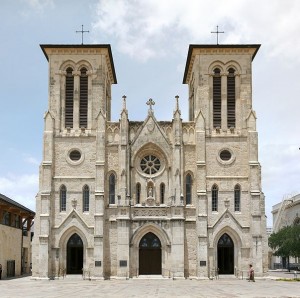 Explorers from the extremely religious Spanish Empire began exploring the area in what is now Texas back in the 16th and 17th centuries.  In the late 1600s Spanish and French interests in the region began to clash.  In response to the threat of French expansion, Spain began to establish a more prominent presence in Texas by constructing numerous churches and missions.

In 1738, the Spanish, with the blessing of the Roman Catholic Church, formally established an archbishopric in Texas at San Antonio.  Construction on the Cathedral of San Fernando lasted for over a decade.  It was completed and consecrated in 1750.  It remained the primary religious institution of the territory until the Mexican War of Independence in the 1820s.

The Cathedral of San Fernando played a small but important role in one of the most famous chapters in Texas/American history.  When Texas revolted against the Mexican empire, the focal point of the conflict was San Antonio.  One of the heroes of the conflict, Jim Bowie, was married in the cathedral in 1831.

During the Battle of the Alamo in 1836, the cathedral was seized by the Mexican army and used as a military observation point.  A flag hoisted on the tower signaled the beginning of the attack.  San Fernando was the site of a major victory celebration after the subsequent defeat of the Mexicans at San Jacinto.  After Texas was annexed to the United States, the Cathedral of San Fernando became the oldest Roman Catholic Cathedral in America by default.  It was visited by Pope John Paul II during his 1987 visit to the United States.

The Cathedral of San Fernando is one of the best examples of Spanish colonial architecture in the United States.  The building dates from 1750, with several renovations taking place since 2000.  Its triple-entrance, white-washed façade remains one of the iconic sites of Central Texas.  The façade faces the old city plaza of San Antonio in a throw back to old European city planning.

The cathedral interior is less ornate then similar churches of the era.  However, for many visitors and pilgrims the most important site is the large, granite sarcophagus.  This tomb holds what are believed to be the remains of the three most famous heroes of the Battle of the Alamo: Davy Crockett, Jim Boie and William Travis.  San Fernando is the site of San Antonio’s annual fiesta which celebrates the battles of the Alamo and San Jacinto.

The Cathedral of San Fernando stands at the very heart of San Antonio, approximately 160 miles west of Houston.  It is open daily from 8:00am-5:00pm though there are some restrictions to visitors during mass.  There is no cost of admission.  Web: www.sfcathedral.org (official website).

Central Texas, and the area around San Antonio in particular, was home to many early churches and missions.  Several of these can be found in San Antonio Missions National Historic Park.  Also in San Antonio is the most famous Spanish mission in America, the Mission San Antonio de Valero, also known as the Alamo, just a stones throw away from the cathedral and the most popular historic/religious site in Texas.