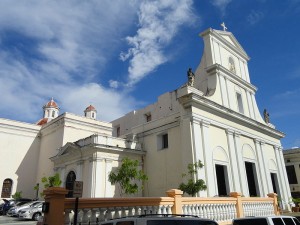 There are many different churches in America that bear some claim to being the oldest.  However, the truly oldest church on American soil is the Cathedral of San Juan Bautista on the island Puerto Rico.  Although located in American territory, it is not technically located within the fifty United States.  Therefore, depending on one’s point of view, the claim of oldest may or may not be valid.  But there is no doubt of its antiquity, or its historical importance, or the fact that it is one of the most popular tourist destinations on the island of Puerto Rico.

The island of Puerto Rico was discovered by Columbus on his second voyage in 1493, and was established as one of the first major colonies of the Spanish empire in the Caribbean.  The colonial capital was established at San Juan, and by the early 16th century was the site of a bishopric.  The first church, a wooden structure, was built in 1521, less than three decades after the discovery of the New World. 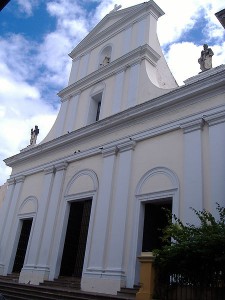 After a hurricane demolished the original church, a full-fledged stone cathedral was constructed in 1521.  This was the second permanent cathedral in the New World after the Cathedral of Santa Maria La Menor in Santo Domingo on nearby Hispaniola.  A free grammar school, established by the church in 1513, was also on the site.

The Spanish explorer Juan Ponce de Leon was closely associated with the cathedral.  He served as governer of Puerto Rico and was instrumental in its construction.  He died the same year as its completion and was among the first to be interred on the site.  The cathedral spent the better part of the next four centuries leading a relatively quiet and peaceful existence. 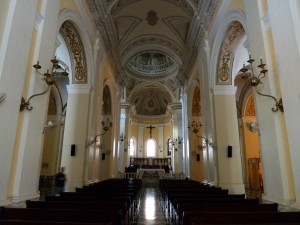 Following the Spanish American War, Puerto Rico became a territory of the United States.  Overnight the Cathedral of San Juan Bautista became America’s oldest church.  In the 20th century, one of the cathedral’s congregants, Carlos Manuel Rodriquez Santiago, rose to prominence in the Church.  He died in 1963, and in 1997 was beatified by Pope John Paul II.  His relics are also preserved on the site, making the cathedral both an historic treasure and center of religious pilgrimage.

Although the Cathedral if San Juan Bautista has undergone periodic renovations, the building as it stands essentially dates back nearly five hundred years.  Large by colonial era standards, it is typical Spanish Colonial architecture, with a simple white façade crowned by saintly statues.  Much of its current size was due to later expansions. 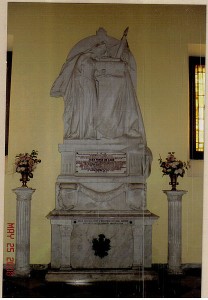 The cathedral interior is more impressive, featuring an impressive yellow-brick and white-marble nave.  There are three points of primary interest within the cathedral.  The first is the immense, carved marble tomb of the explorer and colonial governor Ponce de Leon.  The second is the statue and shrine of the Virgin of Providence.  The third is the Reliquary of Carlos Manuel Rodriguez Santiago who locals hope may one day become a saint.

The Cathedral of San Juan Bautista is located in the historic center of old San Juan on the north coast of Puerto Rico.  It is open every day, hours not available at the time of this writing.  There is no cost of admission.  Web: www.catedralsanjuan.com (official website). 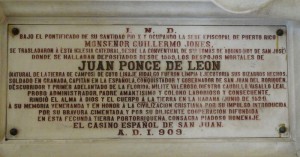 The city of San Juan is, not surprisingly, loaded with old churches.  Perhaps the most interesting, after the cathedral is the San Jose Church, which also dates in part to the 16th century.