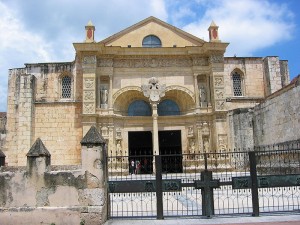 The early history of Santo Domingo was closely tied to the voyages of Christopher Columbus.  Columbus, who sailed west in search of India, and did so in the name of both the Spanish Crown and the Church.  He first set foot in the New World in 1492 in what later became the Dominican Republic, and the city of Santo Domingo was founded near the spot where he landed.  His claim of the island on behalf of Spain and the Church set the stage for five hundred years of the dominance of Catholicism in Latin America.  The city of Santo Domingo was founded a few years after Columbus’ first voyage, and was the first European-style city established in the New World.  For a time Santo Domingo was the de-facto capital of the Spanish colonies in the Americas, and so it became a major center of Catholic activities and missionary efforts.

Most of the earliest Catholic institutions in the Americas appeared first in Santo Domingo, including the first church and the first monastery.  The Cathedral of Santa Maria La Menor was completed in 1540 and was the first full-fledged cathedral in the Americas.  Its importance as the center of Catholicism in the Caribbean was furthered by the presence of the Tomb of Christopher Columbus within, making Santa Maria La Menor a major pilgrimage and tourism destination as well.  The body has since been relocated several times and is now in Spain.

The importance of Santo Domingo began to wane by the end of the 16th century, as larger and more strategic cities were built by the Spanish in places like Mexico, Panama, Columbia and Peru.  Santo Domingo nevertheless remained a key transit center, and often served as a base for various conquistadors.  Throughout the colonial period, the city became a battleground between Spain, France and England, and was frequently troubled by pirates and occasionally threatened by Haitians from the western end of the island.  However, the church and religious buildings survived these troubles largely intact.

Santo Domingo today is the capital of the Dominican Republic.  Remarkably, the nearly five-hundred year-old Cathedral of Santa Maria La Menor still remains, almost unchanged from the time of its original construction save only repairs and the occasional refurbishment.  Despite the fact that Christopher Columbus is no longer interred within, the Cathedral remains the most popular non-beach tourist site on the island and among the most visited churches in the Caribbean.  It has been officially recognized for its importance by the Catholic Church, and is one of the most venerated places in Latin America.

The Cathedral of Santa Maria La Menor is an excellent example of 16th century Spanish-colonial architecture.  Not particularly large by European standards, it was one of the biggest churches in the Americas for the better part of a century.  The imposing façade is constructed of coral limestone.  The most notable feature is the spectacular double-arched entranceway.  There are few windows in the church, even by Gothic standards.

The interior of the church houses an impressive collection of artifacts and treasures.  The Tomb of Christopher Columbus once stood on a spot just inside of the main entrance.  The main altar, the highlight of the cathedral’s collection, is primarily constructed out of silver.  Other pieces include furniture, artwork, and jewelry.  A museum is currently under construction within the cathedral to house and display many of the artifacts.

The Cathedral of Santa Maria La Menor is in the heart of Santo Domingo’s old Colonial center.  It is open daily (visiting hours were not available as of this writing).  Admission is free.  Web: www.santosomingotourism.com/sight/cathedral-and-churches (official website)

In addition to the Cathedral of Santa Maria La Menor, Santo Domingo is home to a number of other early colonial Christian sites, including a few other firsts.  Among these the most notable are the Santa Clara Church and the Santo Domingo Church, which were the New World’s first Franciscan and Dominican convents respectively.