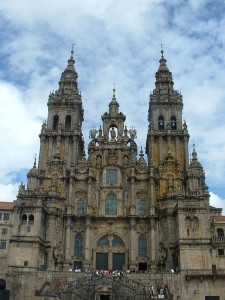 The city of Santiago de Compostela is one of only a handful of cathedrals generally recognized to be the site of an apostolic tomb: that of James the Greater.  According to a somewhat confusing tradition, the remains of James were brought here following his martyrdom at the hands of King Herod around the year 44 AD.  The first cathedral was constructed here in the 9th century, and during the Middle Ages it became the second greatest Christian pilgrimage destination in Europe after Rome.  Because of the tomb’s questionable authenticity and isolated location, Santiago de Compostela does not generate nearly so much excitement or pilgrimage traffic as it once did in the Middle Ages.  It is nevertheless one of the most beloved cathedrals in Spain, and hundreds of thousands of visitors still flock to it every year.  The Cathedral of Santiago de Compostela is part of the Santiago de Compostela Old City UNESCO World Heritage Site.  It was also recently designated one of the Twelve Treasures of Spain.

St. James the Greater was one of Jesus’ closest followers and according to tradition was chosen to bear the Gospel across the Mediterranean Sea to the distant Roman province of Spain.  His sojourn there apparently lasted a few years, during which time he diligently labored to spread Christianity.  He probably would have continued his mission there for many more years had he not decided to return to Judea, where he may have briefly served as the Patriarch of Jerusalem.  Unfortunately, the Christians of the Holy Land were being terribly persecuted, and in 44 AD James was seized by Herod Agrippa and beheaded.  James’ was the only martyrdom of an Apostle to be recorded in the Bible.

Accounts vary as to exactly how his body made it to Spain.  It is possible that James had returned to Judea with followers from Spain, and after his death they smuggled his body back to the west for safety.  Eventually James’ remains found their way to Galicia in northwestern Spain, where they were interred.  For many years his tomb remained forgotten, until an enterprising Bishop ‘rediscovered’ them in the 9th century.  The religious significance and potential economic benefits of having one of only two known Apostolic tombs in Europe was not lost on devout local Christians.  The town where the relic of James was discovered was renamed Santiago de Compostela and a church was erected over the site.

The Shrine of Santiago de Compostela quickly became one of the most popular in Western Europe, and as the number of visitors increased in the 11th and 12th centuries, a massive cathedral was constructed, and James’ tomb became more popular than ever.  By the time of the Crusades, Santiago de Compostela was the second holiest city in Catholic Europe after Rome.  A now-famous pilgrim road grew up between France and Spain, known as the Camino de Santiago, or the Way of St. James, in order to accommodate the pilgrimage traffic.  Millions traversed the Camino during the Middle Ages.

After the Crusades ended and the sacred sites in Jerusalem and Bethlehem were once again too difficult for most Christians to visit, the Tomb of St. James became more important than ever.  Pilgrimages to the cathedral peaked in the 15th and 16th centuries as Spain was swept up in the religious fervor of the Inquisition.  It was not until the colonial era that the Cathedral of Santiago finally saw a wane in interest.  By the 18th century, Santiago de Compostela had become more of a regional attraction.  However, since World War II, Spain has seen a considerable resurgence in tourism, and many long-absent pilgrims have at last begun to return to the Cathedral of Santiago.

The current Cathderal of Santiago de Compostela is not the first church to have stood on the site.  The original was replaced by a new structure in 868 AD after the discovery of St. James’ Tomb.  This church was replaced again in the 11th century after its destruction at the hands of the Moors.  The great gothic sand-colored façade is easily one of the most impressive and memorable in Spain, and the site of the towering Cathedral must have been awe-inspiring to visiting pilgrims as they climbed its great stone stairs.  Large statues of David and Solomon dominate the staircase, welcoming visitors.  Periodically updated, expanded and renovated over the centuries, the rest of the outer structure exhibits an array of styles from Romanesque to Gothic to Baroque.

The Cathedral’s interior is richly appointed, befitting the vast wealth that centuries of pilgrim donations have bequeathed upon it.  Therein is kept a trove of precious artifacts and furnishings.  Among the highlights is the Portico de la Gloria by the artist Mateo.  The high altar is thickly adorned with gold, including a golden shell, which is traditionally kissed by visiting pilgrims.  Beneath the altar is the Cathedral’s focal point, the silver casket which contains the remains of James the Greater.  Alongside him are buried Theodorus and Athanasius, two of his disciples.

The Cathedral of Santiago de Compostela is located in the isolated northwestern corner of Spain, nearly a hundred miles west of Oviedo and more than two-hundred and fifty miles away from Madrid.  Despite its location at the end of a major pilgrimage trail, it is definitely out of the way for most visitors to Spain.  It is open daily from 7:00am-7:00pm.  There is no cost of admission.  Web: www.catedraldesantiago.es (official website)

At the time of Santiago de Compostela’s rise in the 9th century, most of Spain was under Islamic control, and Christianity clung to a narrow territory in the extreme northwest of the Iberian Peninsula.  Because of this, there are few related sites in or around the city.  However, there is the Museum of the Cathedral of Santiago de Compostela, which houses exhibits on the history of the cathedral as well as a number of interesting artifacts. The route known as the Camino de Santiago still exists and consists of several ancient roads which run through Spain, Portugal, France and the Low Countries.