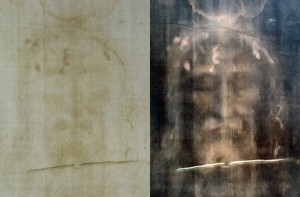 Of the countless ‘genuine’ Christian artifacts hauled back to Europe throughout history, none are quite as popular as the cloth known as the Shroud of Turin.  Believed to be the linen in which Christ’s body was wrapped at the time of his burial, it bears the image of a man who suffered death by crucifixion, but as a photo-negative image.  This artistic feat, thought to be an impossibility to create by artistic means, at least in ancient and medieval times, is believed by many to have been divinely wrought.  Regardless of its origin, it is one of only a handful of artifacts directly tied to the life of Christ which is publicly displayed at regular, if rare, intervals.  Its home at the Cathedral of St. John the Baptist makes Turin one of the most popular Christian pilgrimage destinations in Italy outside of Rome.

Is the Shroud of Turin the actual burial cloth of Christ?  Of all of the great Christian artifacts recovered over the years, including the Holy Grail, the Crown of Thorns, the True Cross, the Spear of Destiny, Vernoica’s Veil, etc., the Shroud of Turin may be the likeliest candidate.  Nevertheless the evidence is sketchy.  The first mention of the existence of such a cloth dates back to 6th century Edessa, where early Christians apparently brought it after fleeing from Jerusalem.  This Image of Edessa was mentioned in early writings, including a description of the strange bodily imprint.  Afterwards there is no mention of the cloth again until it appeared in Constantinople in 944, where it was sent for safekeeping following the Muslim conquest of the Holy Land.  The cloth was described in a sermon of the period.

In 1205 AD the shroud was seized by knights of the Fourth Crusade.  It was almost certainly brought back to France as booty.  In 1357, it was publicly displayed in Troyes.   It is possible that this was one and the same as the Image of Edessa, although there are no records officially connecting the two.  Controversy surrounding the Shroud began almost immediately.  Strangely, its legitimacy was at first energetically denounced by both the Church and the local bishop.  However, the people of Troyes embraced their new artifact without reservation.  It was soon being presented in other cities of the region to enthusiastic crowds.  The Church was forced to change their official position on the Shroud, and soon various factions were fighting for control of the artifact and the right to permanently house it.

Ownership finally came to the House of Savoy, who gave it a permanent home in the Savoy capital of Turin in the 15th century.  In 1532 AD the Shroud was damaged during a fire, including being permanently marked by molten silver which burned through it.  A poor attempt to repair the Shroud left it further scarred with patches.  After the cathedral was restored, the artifact was kept locked away, and only seen on infrequent occasions.  It has been the property of the Papacy since the 1980s.

The authenticity of the Shroud of Turin is a subject of much debate.  The strongest factor in favor is the artwork involved, which many believe was technically impossible before the modern age, suggesting that the image on the cloth is indeed of divine origin.  The strongest factor against is scientific; carbon dating suggests that the cloth only dates back to the 13th century at the earliest.  However, devotees assert that the sample may have mistakenly been taken from one of the patches added later.  Today the Shroud is only displayed on rare occasions, at which times the cathedral swarms with the devout and the curious.

The Cathedral of St. John the Baptist in Turin is a relatively simple affair compared to many of Italy’s other major Cathedral’s.  Much of the original building was damaged by fire in the 16th century and has been extensively restored since.  The white brick edifice has a plain façade with three doors, and the whole is crowned by a small white dome.  A square belltower stands to the right of the main entrance.  A large expanded wing behind the main altar now houses the Shroud of Turin.

The controversial and rarely seen Shroud is one of the visually most famous artifacts of the Church.  The depicted image appears to be a photo-negative.  The facial features reflect traditional images of Jesus of Nazareth, with long flowing hair and prominent beard and mustache.  Dark stains appear in the locations where Christ was wounded, including punctures from the Crown of Thorns, his spear wound and the nail-holes where he was crucified.  Eight poorly attached patches mark where the Shroud was damaged during the fire.

Turin’s religious sites revolve almost exclusively around the Cathedral of St. John the Baptist and the Shroud.  However, just outside of the city is the Basilica of Superga, where many Italian rulers from Savoy and Sardinia are buried.