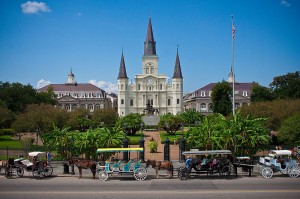 The Cathedral of St. Louis is the religious centerpiece of New Orleans.  Although not the oldest cathedral in the United States, it is the oldest not constructed by the Spanish and is also the oldest in continuous operation, having been active since the 18th century.  It is also one of the few Catholic churches in America to have been visited by a Pope, and also one of the few to be designated as a basilica.  Interestingly, one of the cathedral’s most famous parisheners, Marie Laveau, was a renowned practicer of voodoo.

New Orleans was among the very first Catholic settlements in the United States that was not originally established by the Spanish colonial empire.  It was founded in 1718 by the French Mississippi Company as a base to explore the Mississippi River.  The same year, the city’s first wooden church was constructed in what is now the center of New Orleans.  It was replaced by a more permanent structure in the 1720s. 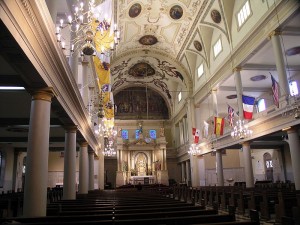 For the next two centuries, the church, and later cathedral, had a turbulent history.  After New Orleans received swarms of refugees from French Canada after the Seven Years War, the church burned to the ground on Good Friday in 1788.  It was rebuilt in the 1790s when it was elevated to a full-fledged cathedral.

During the 18th century, the cathedral was rebuilt several times to accommodate the burgeoning population.  During one of the renovations in 1850, the main bell tower collapsed, necessitating a major reconstruction.  In 1901, the sanctuary was heavily damaged by a bomb.  A few years later, the New Orleans Hurricane of 1915 ripped through the place, forcing the cathedral to close for a year for repairs.  Finally, it suffered minor damage during Hurricane Katrina in 2005. 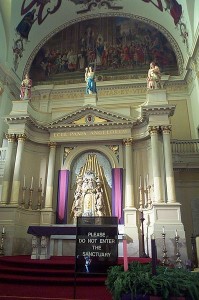 Despite its many misfortunes, the Cathedral of St. Louis has come through and stands today as one of the most beauful legacies of the French colonial period.  In 1964, Pope Paul VI named it a minor basilica, one of the very few churches in the United States to be so designated.  In its greatest moment, the cathedral was visited by Pope John Paul II during his state visit in 1987.

The Cathedral of St. Louis, while clearly a colonial-style church, bears the look of its French heritage.  Its massive, brilliant white façade dominates Jackson Square, one of the few cathedrals in America to overlook a major city square.  Its triple blue steeples look less like those of a church and more like those of a fairy-tale castle.  It completely stands out from the surrounding neighborhood, New Orleans’ world famous French Quarter. 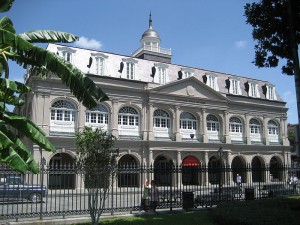 The cathedral’s interior is huge and ornate, arguably the most magnificent Catholic Church in the American south outside of Florida and Texas.  The immense frescoes on the walls and ceilings are among the finest in the United States.  The highlight and centerpiece of the cathedral is the towering marble altar which would not be out of place in the great churches of Europe.

The Cathedral of St. Louis, the most iconic building in the city, dominates one side of Jackson Square in the heart of New Orleans by the French Quarter.  It is open every day (hours not available).  There is no cost of admission.  Web: www.stlouiscathedral.org (official website).

Immediately next door to the cathedral is The Presbytere, which was originally constructed as a monastic residence.  The city’s next most famous church is the Jesuit Church of the Immaculate Conception, which is one of the American South’s rare examples of a Moorish Revival structure.