The first westerners to arrive in most of the Rocky Mountain states were, not surprisingly, Catholic missionaries: Spanish missionaries into the southern Rockies and French missionaries into the northern Rockies.  Just as they did in Texas and California, these early Catholic explorers left behind a string of missions, many of which are the oldest churches (and often oldest buildings) in many of these states.  In fact, one of these missions lays claim to being the oldest surviving church of any sort in the United States; and all of them are now important American heritage sites. 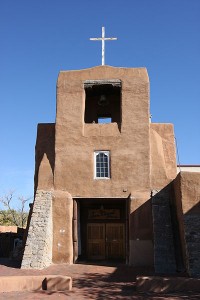 The chapel of the San Miguel Mission is the oldest mostly intact church standing in the continental United States of America.  It dates from the very early 17th century, when the Spanish established a colonial capital at Santa Fe.  Started in 1610 and completed within a few years, it predates the arrival of the Puritans in New England by nearly ten years.  The mission was one of the most important Christian sites in the American southwest until the mid-19th century.

The fact that this four century old adobe mission predates anything on the Eastern Seaboard is nothing short of amazing. It is almost a fluke of history that this church, constructed by an expedition exploring the Rio Grande and Santa Fe Rivers, is still standing.  Only the chapel survives, along with some vestigial outer walls of the original mission.  The San Miguel Mission is part of he Barrio de Analco National Historic Landmark District.

The San Francisco de Asis Mission Church is regarded by many officianados of Native American architecture as the finest surviving adobe brick church in America.  Taos became home to a major Catholic mission in the late 18th century, with the current church being completed in 1815.  It was designed to be part of the city fortifications against Comanche raids.  It is perhaps for this reason that the mission has survived so well.

Since the beginning of the 20th century, Taos has been a popular destination for artists, attracting talent from painters such as Georgia O’Keefe to photographers like Ansel Adams.  The San Francisco de Asis Mission has been a subject for these and many other artists, with its stately twin adobe bell towers adorning many works. The San Francisco de Asis Mission Church is a National Historic Landmark.

The Mission San Xavier Del Bac, also known as the White Dove of the Desert, is the oldest church in Arizona and one of the largest surviving Spanish missions between California and Texas.  The first mission in Tucson was founded in 1692 by Jesuit missionaries under the leadership of Father Eusebio Francisco Kino, who established numerous missions throughout the Sonora Desert.  The current church was constructed in 1797 after the previous structure was destroyed by Apache raiders.

The mission was abandoned throughout much of the 19th century, but was taken over and restored by the Franciscans in 1913.  Today it is considered as one of the best surviving missions of the Spanish colonial era, as many others were technically constructed under the auspices of Mexico.  The Mission San Xavier Del Bac is a National Historic Landmark.

The Cataldo Mission, or Mission of the Sacred Heart, is not only the oldest church in Idaho, it is the oldest standing building in the state.  It was established by Jesuit missionaries in 1846 and reconstructed twice, once after flooding and once after a fire.  The current building was completed in 1887.  It is architecturally odd for its use of construction materials, which included tin cans and newspapers, and its possible lack of nails.

Although no longer in active use, the mission church is well maintained and is now part of the Old Mission State Park, which preserves much of the original mission compound.  The Cataldo Mission is a National Historic Landmark.

St. Mary’s Mission is the oldest church in Montana, as well as being the site of the first permanent settlement in the state.  It was founded by famous French Jesuit missionary Pierre-Jean De Smet, who helped to establish many Catholic missions on the American Frontier.  An early chapel at the mission served as a primitive medical facility servicing the local Native American tribes.  The current church was built in 1866.

Several of the mission’s earliest buildings have survived.  In addition to the log-cabin church, the original chapel is still present, as well as the original pharmacy building.  A museum on site details the history of the mission.  St. Mary’s Mission is listed on the National Register of Historic Places.