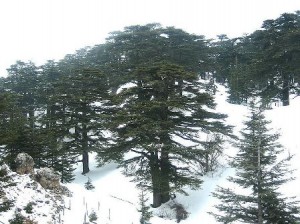 In the midst of the Holy Land’s countless venerated mountains, deserts, ruins and tombs, it is perhaps fair that there are at least a few sacred places that celebrate life.  If there is any such place representative of the early kingdoms period, it is the fabled Cedar Groves of Lebanon.  The cedar trees of Lebanon are mentioned many times in the Bible, most notably in the stories of David and Solomon, for their wood was prized and used in the construction of the First Temple.  Although the cedar forests of the region have been decimated for centuries, a few of the ancient giants still cling to life.  These are now incorporated into a small national park, where new trees have been planted and protected since the 19th century.  The Forest of the Cedars of God is a UNESCO World Heritage Site.

The Lebanon Cedar Tree is one of two major species of cedars, and one of the only coniferous species to be found in the Eastern Mediterranean region.  Named for the mountain upon which they were first harvested and cultivated, they are native to Lebanon, Cyprus, and nearby regions of Syria and Turkey.  The wood of the cedar tree has been prized since ancient times, both for its strength and durability in construction as well as for its pleasant aroma.

The great Cedar Forest of Lebanon was considered a sacred place by the Canaanites long before the Israelites arrived on the scene.  It was known to people as far away as Mesopotamia, and was almost certainly familiar to Abraham when he arrived in Canaan.  The trade in cedar wood permeated the Mediterranean world, from the cities of Phoenicia where it was used in shipbuilding and construction, to Egypt where its resin was used in the preparation of the dead.  When the Israelites arrived, it became prized for medicinal and religious purposes.

The Cedar Forest of Lebanon reached the height of its fame during the reigns of kings David and Solomon, when demand for cedar wood soared in order to accommodate the two kings’ extensive construction programs.  The king of Lebanon, who was both pragmatic and on reasonably good terms with David, levied a heavy tribute of cedar wood to Israel in order to secure his people’s independence.  The wood was used in major building projects throughout Israel, most famously in the construction of the Temple of Solomon.

In later years, the Cedar Forests of Lebanon became more and more accessible to the burgeoning empires that were emerging in the region.  The groves of massive trees were plundered by everyone from the Assyrians in the 8th century BC to the Ottomans in the 19th century AD.  It was only in the 1800s that conservancy efforts were finally introduced.  By that time less than twenty trees over a thousand years old were still standing.  Today the surviving trees are fiercely protected and cared for, and though new groves of trees have been planted in vast numbers throughout the region, it will be many centuries before the ancient forest will seem its old self again.

The Shouf Cedar Reserve covers nearly five percent of Lebanon and is one of the largest nature parks in the Middle East.  It incorporates much of Lebanon’s territory inland from Beirut, including Mount Lebanon of Biblical fame.  The park was designated a UNESCO biosphere reserve in 1995.  It is a highly diverse area, incorporating mountains, hills and lowlands, forests and wetlands, and is home to a number of large animal species that have otherwise been long missing from the area

Of course, the main attraction of the Shouf Cedar Reserve from both a naturalist and religious point of view are the three magnificent forests of cedar trees.  It is estimated that one in four cedar trees in Lebanon grows within the park’s boundaries.  The most popular site within these forests are the groves which contain the dozen or so ancient giants, cedar trees which tower as high as a hundred and thirty feet and which date back to the days of the Byzantine Empire.

The Shouf Cedar Reserve spreads out over a large area approximately twenty miles southeast of Beirut.  It is home to the largest forest of cedar trees in Lebanon.  As a national park it is an open site, though access to the grove of the ancient cedar grove is restricted.  The park is open daily except Mondays.  Ther is no cost for admission.  Web: www.shoufcedar.org (official website of the park)

Byblos, one of the oldest inhabited cities in the world and the chief Phoenician port during the days of the united realm of Israel, was the probable home of the king of Lebanon who was known to King David.  The Ruins of Byblos are extensive, and include remains of the city from David’s period and even earlier.