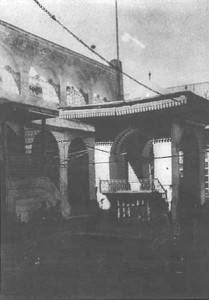 For nearly three millennia, Syria boasted the oldest community of Jews outside of Israel.  For most of this time, the center of Jewish life in Syria was city of Aleppo.  The Central Synagogue of Aleppo is one of the world’s oldest, its original foundations having been established by the Israelite General Joab during the reign of King David in the 10th century BC.  The current structure actually dates back only to the early 1400s, but incorporates remnants of the earlier synagogue.  For over five-hundred years the Synagogue of Aleppo was home to the Codex of Aleppo, the oldest complete copy of the Hebrew Bible, and both Jewish and Christian scholars made pilgrimages here to study the sacred text.  Although the codex has since been reemoved, and the Jewish community of Aleppo has dwindled to virtually nothing, the Central Synagogue remains a beloved legacy of this once great community.  The Central Synagogue is part of the Ancient City of Aleppo UNESCO World Heritage Site.

There have been communities of Jews in Syria since the time of the Judges, and these almost certainly predated the arrival of Jews in Mesopotamia.  The first Jews, or technically Israelites, in Syria probably came from the northern tribal territories of Dan and Naphtali to trade in the city of Damascus, though it is unknown whether any Israelites settled there at such an early date.  Damascus, and most of the rest of Syria, came under Israelite dominion when the region was occupied during the reigns of David and Solomon.

The armies of Israel under the leadership of General Joab conquered most of Syria as far north as Aleppo in the 10th century BC.  At that time, according to local tradition, Joab laid the foundation for Aleppo’s synagogue.  This antiquity has never been verified, however, and archaeological evidence suggests that the synagogue dates from the Byzantine period.  In any event, Jews probably began migrating and settling in Syria at this time, with significant populations established in Damascus and Aleppo long before the Romans arrived.

Following the arrival of Christianity in the 1st century AD, Syria became a major spiritual battleground between traditional Jews and the followers of Jesus of Nazareth.  This was especially true in the period between the Bar Kokhba Revolt and the conversion of the Constantine to Christianity, when both Jews and Christians were vying for converts in the area.  Even after Christianity achieved dominance in the 4th century, the Jewish communities of Syria remained large and very active.  Their position grew stronger again a few hundred years later, when the region came under the control of first the Persian and then the Islamic Empires.

Aleppo, and to a lesser extent Damascus, remained important centers of Judaism right down to the 20th century.  Other than the periods of the invasions of the Crusaders and the Mongols, the Jews of Syria survived the Middle Ages relatively unscathed.  The Central Synagogue of Aleppo was destroyed by the Mongols in 1400, but was quickly rebuilt.  Around the same time, a complete 10th century copy of the Hebrew Bible known as the Aleppo Codex was brought to Aleppo by the descendents of Moses Maimonides.  Considered to be the oldest accurate such manuscript, Aleppo became an instant magnet for Jewish scholars and pilgrims who wished to study the codex.  Unfortunately, the rebirth of Israel in the 20th century saw the end of this ancient community.  Few Jews now remain in Syria, though the synagogue, recently renovated, is still open to anyone who wishes to visit.  What is left of the codex can now be found in the Shrine of the Book in Jerusalem.

The exact date of construction the original building is a matter of a conjecture, but there is clearly evidence of a Byzantine-style synagogue here as early as the 5th century AD.  The synagogue was largely destroyed by the Mongols in 1400, but was reconstructed shortly thereafter along the original lines.  Following the immigration of many Spanish Jews to Aleppo in the 1500s, the synagogue underwent a major expansion and renovation.  The Synagogue of Aleppo as it stands today essentially dates from this period.

The design of the synagogue is unlike most other such structures today, and may reflect a building layout style that was common to synagogues during the Roman and Byzantine periods.  It actually features multiple sanctuaries situated around a central courtyard.  Services were held both in the various sanctuaries and in the courtyard.  Another odd feature is the presence of seven different Arks, all of which once housed anient Torah scrolls.  It was in the seventh Ark that the Aleppo Codex resided for the better part of five centuries.

Aleppo, once one of the largest and most important cities in the Eastern Mediterranean Sea in ancient times, is located in the far north of Syria close to the border with Turkey, approximately two hundred and fifty miles away from Damascus.  As of this writing, no visitor information was available for these sights.  Web: none available.

There are few other important synagogues remaining in Syria today.  Most of those that have survived are located in Damascus.  However, the spectacular remains of one ancient synagogue can be found in the Ruins of Dura-Europos in eastern Syria.  The surviving 295 pages of the Aleppo Codex are kept in the Shrine of the Book in the Israel Museum in Jerusalem