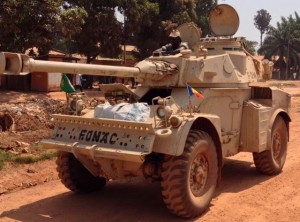 The nation of Chad, which sprawls across the heart of North Africa, is among the world’s most challenging countries. According to both the United Nations and CIA World Factbook, it is currently counted among the bottom fifth of the world’s poorest countries. Over the last decade it has become an oil power with all of the problems that come with such mineral wealth. Its geographic isolation in the center of the Sahara/Sahel region has made it a diplomatic afterthought in the international community. And yet for all of its problems, Chad is quietly growing into a regional player of vital strategic importance.

Chad is located in a very rough neighborhood. Standing at the crossroads of Arab/Muslim North Africa and Christian Central Africa, it is surrounded on virtually all sides by nations mired in conflict, largely between religious fundamentalists and other groups. And though it has seen more than its own share of civil strife since achieving independence from France in 1960, it is, at least relative to most of its neighbors, an island of stability amidst very stormy seas.

Religiously, the population of Chad is approximately 55% Muslim, dominating the northern half of the country, and 40% Christian, dominating the southern half of the country. Not surprisingly, many of Chad’s civil disputes tend to pit Muslims against Christians. Nevertheless the two religious groups seem to get along better here than almost any other place in North Africa.

This is due primarily to the relatively secular nature of the national government. While Chad’s president, Idris Deby, is a practicing Muslim, he has made no significant effort to introduce or enforce any strict practice of religiously conservative law. Moreover, with most of the country’s Muslims of a more moderate background, there seems to be little interest in a general introduction of Sharia law in Chad. This in turn has helped to keep religiously based sectarian violence to a minimum. 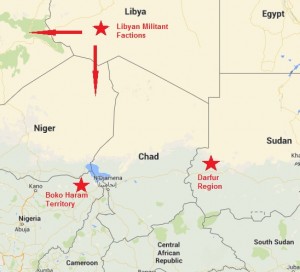 Chad and its neighbors (Google Maps)

Sadly, the same cannot be said of most of Chad’s neighbors. This is especially true in Sudan, Libya, Niger and Nigeria (the Central African Republic has similar problems, but not as a result of Islamic fundamental activity). And while Islamic extremism is gaining strength in most of the region, Chad is working diligently, and so far successfully, to keep the spread of religious fundamentalism at bay.

Chad’s neighbor to the east, Sudan, is one of the most religiously conservative nations in Africa. Like Chad today, it used to have a population dominated by Muslims in the north and Christians in the south. Unlike Chad, an increasingly fundamental Muslim population and a government strongly bent on a strict application of Sharia law has led to the brutal suppression of the country’s moderate Muslims and Christians over the last few decades.

Subsequently Sudan has been wracked by religious violence for years. This is especially true in its Darfur region, where hundreds of thousands of civilians, including many Christians, have been killed since 2003. This situation improved somewhat in 2011 when South Sudan formally broke away from the rest of the country, taking most of the Sudanese Christian population with it.

As part of its foreign policy for many years, Sudan regularly attempted to extend its influence into neighboring countries. In Chad this meant supporting rebel groups seeking to overthrow the government. Chad responded in kind by supporting rebel groups in Sudan, thus embroiling it in the Darfur Crisis. While Sudan’s efforts in Chad failed miserably, Chad’s efforts in Sudan ultimately contributed to South Sudan’s independence and improved safety for many Christians and more moderate Muslims.

In addition to acquitting itself well in its war with Sudan, Chad also become the primary host to Darfur’s refugees. It is estimated that over two hundred thousand Sudanese civilians now live under Chad’s protection, making it home to one of Africa’s largest populations of displaced persons.

Chad and Libya have had a long and tumultuous relationship that dates back to the 1960s and 1970s, when Libya regularly tried to extend its influence southwards at Chad’s expense. This conflict peaked in 1987, when, to the astonishment of the international community, the Chadian army routed a major Libyan invasion and thus secured its northernmost territory and border, which is intact to the present day.

In 2011, the Arab Spring which swept across much of the Middle East led to the ouster and death of Muammar Gaddafi, Libya’s decades-long dictator. Libya subsequently collapsed into a morass of factional fighting while Islamic extremism spread rapidly across the country. Today at least four major factions are vying for control of Libya, with terrible violence directed against civilians on all sides.

To add to the problems, many of Gaddafi’s followers, including large numbers of heavily armed troops, have fled southwards into the Sahara. These groups, many of whom had come from the Tuareg region, have begun establishing themselves in Algeria, Niger and Mali, which are now becoming increasingly unstable. Violence is on the increase in these countries, especially in neighboring Niger.

But not in Chad.

While Libya’s armed factions are causing problems for many of its other neighbors, they seem to be giving Chad a wide berth. This is due in part to geographical considerations. But there is also the Chadian army. Chad now has one of the most formidable and experienced militaries in the region. Memories of the 1987 humiliation are still fresh in Libya, and none of the factions currently fighting there are particularly eager to draw the Chadian army into the conflict.

As for the militant groups from Libya establishing themselves elsewhere, countries like Niger and Mali are undoubtedly considered to be much softer targets than Chad, and the Chadian government undoubtedly wants to keep it that way. While the Libyan conflict threatens to destabilize much of the Sahara region, Chad alone looks as though it will escape the turmoil unscathed.

To the southwest, Chad shares a small border with Nigeria. Nigeria, the most populous country in Africa, is also the regional economic powerhouse, and has been enjoying an increasingly more democratic government process over the last few years. Despite this, Nigeria still has many problems rooted in decades of instability. Some of this comes from the almost perfectly even population split between Muslims in the north and Christians in the south. While relations between the two groups have traditionally not been bad, the growth of fundamentalist groups in the north has led to increasing problems.

In 2002, the group known as Boko Haram was founded in the northeastern Nigeria. Closely tied to Al-Queda, Boko Haram espoused an extremely fundamentalist Islamic doctrine and became a magnet for disaffected Muslim youths throughout the region. Over the next decade it became a powerful force that controlled a large swath of northwestern Nigeria. By 2014 Boko Haram had grown so large and so ruthless that it was beyond the ability of the Nigerian military to deal with the situation on its own.

In desperation, Nigeria turned to its neighbors for aid in containing Boko Haram. Cameroon, which was directly threatened, had already suffered from terrorist attacks and was contributing their armed forces to Nigeria’s efforts. But it was Chad’s entry into the conflict that truly tipped the scales against the fundamentalists. In February 2015 the Chadian army launched a major offensive against Boko Haram that resulted in the deaths of over two hundred militants, effectively turning the tide of the conflict.

While Chad has since had to endure at least one known suicide bombing attack from Boko Haram, its military efforts do not appear to have been deterred. President Idriss Deby, more than anyone else in the region, has assumed leadership in this struggle against religious fundamentalism in Central Africa, and a regional military force is now being organized in the Chadian capital of N’Djamena to shatter Boko Haram’s power base.

For those who follow the news, the concerns of rising religious fundamentalism across the Middle Easy are very real. A mere glance at a map of North Africa clearly shows Chad’s strategic importance in this battle. Right now Chad is an island of sanity where moderate Islam is practiced and where religious toleration is still (relatively) the order of the day.