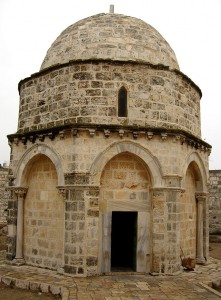 The chronologically last of the major holy sites associated with the life of Christ is the Chapel of the Ascension on the Mount of Olives east of Jerusalem’s Old City.  It bears the distinction of being the only major shrine related to the life of Christ that is not currently under Christian jurisdiction.  It has technically been in use as a mosque for centuries.  However, Saladin granted Christians access to the shrine in perpetuity, and it has always been first and foremost a Christian holy place.  The chapel is highly venerated by Christians and Muslims, both of whom recognize it as the site of the final Ascension of Jesus of Nazareth.  After the Church of the Holy Sepulchre, it is the most popular Christian pilgrimage destination in Jerusalem.

The series of events that ultimately led to the Passion of Jesus upon Gologatha began in the quiet hill country east of Jerusalem, and it was in these same hills where Jesus spent most of his final weeks on Earth.  The pivotal event which took place in the area was Jesus’ arrival in Bethany a few weeks before Passover.  Here he resided with his Apostles in the house of Mary and Martha, preparing for the showdown with the Temple priests and the tribulations to come.  Here he brought Lazarus, the brother of Mary and Martha, back from the dead.

Later, a few weeks after the Passion and Ressurection, Jesus returned to the hills east of Jerusalem, where he spent the final days of his time on Earth.  According to the New Testament, he made appearances in several locations here, including in Bethany and upon the Mount of Olives.  However, it is unclear exactly which of these locations was the place of Jesus’ final ascent to Heaven.  The most popular tradition is that his final moments were spent on the Mount of Olives, which would make sense considering its proximity to Old City of Jerusalem and the Temple Mount.

Christians have revered the Mount of Olives as the location of the Ascension since the 1st century AD.  An early shrine commemorating the event was located in a cave on the hill’s lower slopes, hidden away out of fear of persecution.  Like all of the holy places associated with the life of Jesus, the Byzantines erected a shrine on the site in the 4th century.  This first incarnation of the Chapel of the Ascension was unique among early Byzantine churches in that it was constructed with an open ceiling in honor of Jesus’ miraculous rise to the Heavens.

The shrine of the Ascension did not fare well over the centuries.  It was destroyed twice, once by the Persians and once by the Muslims.  It was rebuilt in the 12th century by the Crusaders, but seized by Saladin during his conquest of Jerusalem in 1198.  However, Saladin, who was more respectful of holy places than earlier Persian and Muslim conquerors, did not destroy the chapel, but merely added his own embellishments.  As a gesture of goodwill he permitted Christian pilgrims to continue to visit the chapel, who were coming anyway.  This arrangement has been maintained to the present day, and the mosque continues to welcome Christian visitors eight centuries later.

The current Chapel of the Ascension is located towards the top of the hill known as the Mount of Olives.  It is actually the third shrine to be constructed on the site.  It predominantly dates from the Crusader period, but incorporates elements of earlier Byzantine- and Persian-era shrines, as well as later additions from ensuing Muslim occupations.  The site of the shrine is enclosed within a walled compound which incorporates the chapel as well as a crypt.  Nobody is exactly certain who is buried within this mysterious tomb.

The current chapel building dates largely from the 12th century and consists of a small octoganal-shaped building, an architectural hallmark of some of the Crusader knightly orders.  The previous Byzantine-era shrine had been open to the sky as a symbolic gesture to the miracle of the Ascension, but this was closed off by the Crusaders and capped by a dome added later by the Muslims.  They also added a small mihrab, or prayer niche, to the chapel wall.  The sparse interior of the shrine is dominated by an odd relic on the floor: the Ascension Rock. It has an impression of a right footprint which was supposedly made by Jesus at the moment of his departure.

The Chapel of the Ascension is located east of the Old City of Jerusalem, just outside of the walls.  Although the Chapel of the Ascension is under Muslim jurisdiction, visiting is generally not a problem for Christian visitors.  The shrine is easily accessible from Jerusalem’s Old City.  It is open to visitors every day from 8:00am-6:00pm (earlier closing in the winter).  The cost of admission is NIS3.  Web: www.mountofolives.co.il (official site of the Mount of Olives)

Most of the last days of Jesus’ ministry were spent in the few miles between Jerusalem and Bethany to the east, and the region is full of sites related the final events of his life.  Bethany, modern-day Al Azariyyeh, is the location of the House of Mary and Martha, a Roman-era dwelling that is believed to have been the residence of Lazarus’ two famous sisters.  Jesus supposedly sat on a stone now located in a Greek Orthodox Convent, and slept on the ground now located within a Franciscan Church.  Behind the latter is the highly venerated Tomb of Lazarus, though many believe this is simply where he was interred before his resurrection, and that the true tomb is that which is located in the city of Larnaka on Cyprus.  Closer to the Chapel of the Ascension on the Mount of Olives is the Church of the Olive Grove, where Jesus revealed several important prophecies to the Apostles.