Millions of visitors flock to America’s national parks every year, intent on embracing and being awed by wonders of nature.  But few who go realize that, hidden among America’s mountains, deserts, canyons and forests, are a number of beautiful and historic churches, and even fewer seek these places out.  However, the chapels of the national parks are architectural gems set amid spectacular scenery that are worth a look, and some of these have become extremely popular for people looking for an alternative destination to be married. 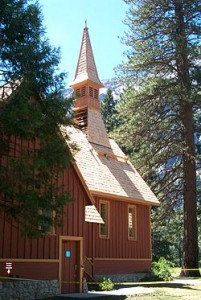 Yosemite Valley Chapel is one of the oldest structures standing in Yosemite National Park and possibly the oldest church located in any of America’s national parks.  Commissioned in 1878 by the state of California, it was constructed the next year and relocated from its original location in the Lower Village to the Old Village in 1901.  It has been there ever since, serving the park as an interdenominational facility, and is one of the most popular places in the entire national park system for weddings.

Designed by renowned San Francisco architect Charles Geddes, the small wood-frame structure enjoys the magnificent backdrop of El Capitan, the immense stone cliff that is Yosemite’s best known feature.  The charming church  is painted red, and framed in yellow beams. Crowned with a high-peaked steeple and surrounded by evergreens, it looks as though it might have been lifted straight out the Bavarian Alps and set down here.  The Yosemite Valley Chapel is located a short walk from Yosemite Village and the Yosemite Lodge. 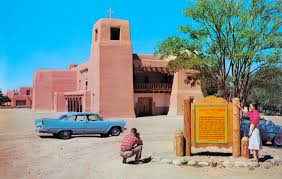 The Chapel of El Cristo Rey is the only dedicated church in Grand Canyon National Park and the only Roman Catholic chapel to be found inside any United States National Park.  Although another building, known as the Shrine of the Ages, was originally meant to serve as an interdenominational chapel, it is currently a multi-use facility used primarily for secular purposes.  The Chapel of El Cristo Rey, a strictly religious facility, is Catholic, but people of all faiths are welcome to visit.

The current chapel was not erected until hundreds of years after early Spanish missionaries first explored the area.   The elegant, surprisingly large and well cared for adobe structure is located on the south side of the Grand Canyon Village, less than half a mile from the El Tovar hotel and the south rim of the canyon.  Its most striking feature is the magnificent old adobe bell-tower overlooking the entrance. 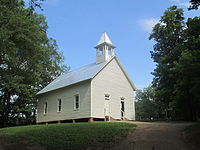 Cades Cove is a town that time forgot.  When Great Smoky Mountains National Park was created in 1934, isolated Cades Cove found itself caught inside the borders.  Instead of being abandoned and torn down, the town was preserved as an historic district, including three beautiful old churches that date from the 19th and very early 20th centuries.  These three institutions, the Primitive Baptist Church, the Methodist Church and the Missionary Baptist Church, are preserved in good condition and remain semi-active.

The Cades Cove Baptist community was founded in 1827, but split into two churches in 1841.  The Primitive Baptist Church moved into the current building in 1887, while the Missionary Baptist Church dates back to 1915.  The Cades Cove Methodist community can also be traced back to the 1840s, while the current church was completed in 1902.  The three churches are spread out throughout Cades Cove, one of the most visited places in the park, but are all within walking distance of the visitor’s center there.

Chapel of the Transfiguration 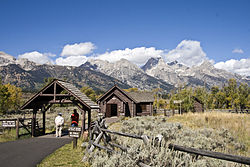 The Chapel of the Transfiguration is one of the youngest national park churches that opened prior to the establishment of its park.  Opened in 1925, it predated the designation of Grand Teton National Park by four years.  It was originally constructed to serve the workers and visitors of the increasingly popular dude ranches that sprang up in the area at the turn of the century.  It was incorporated into the national park in 1929.

The chapel is the epitome of the perfect frontier church.  A log-cabin style structure, this rustic building enjoys both a quaint charm and the magnificent backdrop of the Grand Teton Mountains, and has become a mandatory stop for almost all visitors to the park.  The Chapel of the Transfiguration is a ministry of the Episcopal Church, who still owns and runs it from the parish in nearby Jackson.  As a national park site it is of course open to visitors of all faiths.

Mammoth Chapel has one of the oldest and most colorful histories of any religious site in the national park system.  Its origins go back to the mid-19th century, when the Mammoth Springs area of Yellowstone was home to the military outpost known as Fort Yellowstone.  Church services were irregular until the chapel was established here in 1913.  Interestingly, this was more than four decades after the park was established, making Mammoth Chapel the only church in U.S. history to be constructed with public funds.

Mammoth is one of the most architecturally unique and beautiful in the parks.  Built of the same local materials that were used to construct other buildings in the park, its elaborate stonework and vaulted wooden roof makes it look like a cross between a traditional church and a mini-park lodge.  The chapel is part of the Fort Yellowstone complex close to the North Entrance of the park on the Wyoming side.