With the exception of the Nativity and Santa Claus, there is no holiday phenomenon bigger than Charles Dicken’s immortal classic, A Christmas Carol.  If The Nutcracker is Christmas’ musical cornerstone, than A Christmas Carol is its literary counterpart.  Aside from being one of the great masterpieces of the 19th century, Dickens has been captured in media countless times.  In fact, A Christmas Carol is the most remade film in history, with more than two dozen versions produced for both the big screen and television.  It is almost impossible for anyone to get through the holidays without at least one sarcastically delivered “God bless us, everyone”.

Charles Dickens was among the most popular authors of the 19th century and one of the greatest in English history.  Born in 1812, he was one of the definitive authors of the Industrial Revolution and the Victorian Era.  His body of work is one of the most well-known ever produced, ranking him with other English literary giants such as William Shakespeare.  By far his most popular, if not his most definitive, work is A Christmas Carol.  Written in 1843, it became an overnight sensation, and an indelible part of Christmas tradition.  Upon his death in 1870, he was buried against his wishes in Westminster Abbey.  However, as he did not desire an elaborate tomb, his grave is marked by a simple flagstone which states only his name and the dates of his birth and death – a fitting tribute evocative of the visit of the Spirit of Christmas Yet to Come. 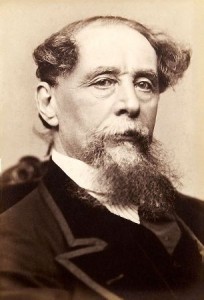 Written in London in uncertain economic times, A Christmas Carol reflects the greed and poverty that defined the period.  It tells the tale of Ebeneezer Scrooge, a fabulously rich but miserly businessman who pursues the accumulation of wealth at all costs, and his encounter with three spirits in a nearly perfect holiday tale of redemption and forgiveness.  During the latter half of the 19th century, the original manuscript was bought and sold a half-dozen times, until at last coming into the possession of J.P. Morgan in the 1890s.  It has been one of the most prized possessions of the Morgan Library in New York City since its inception.

Dicken’s Tomb can be found in the famous Poet’s Corner of Westminster Abbey in the heart of London.  The cathedral is open every day except Sunday from 9:30am-4:30pm, with late closing (7:00pm) on Wednsedays and early closing (2:30pm) on Saturdays.  It is open for worship only on Sundays.  Admission is L15.00.  The Morgan Library is located on Madison Avenue in Midtown Manhattan.  It is open to the public Tuesdays through Thursdays from 10:30am-5:00pm; Fridays 10:30am-9:00pm; Saturdays 10:00am-6:00pm; and Sundays 11:00am-6:00pm. It is closed on major holidays.  Admission is $12.00.  Web: www.westminster-abbey.org (official site of Westminster Abbey); www.themorgan.org (official website of the Morgan Library)