There is no place in America that celebrates the holidays like New York City.  From Thanksgiving Week to New Years Day, New York swarms with tourists.  Christmas week itself sees tens of thousands of visitors packing places such as Rockefeller Center and Macys, while The Nutcracker at Lincoln Center and The Rockettes at Radio City Music Hall play sold-out shows.  But for those who have already seen these sites, or just want to escape the crowds, New York offers some excellent alternatives off the beaten path.

Original Manuscript of A Christmas Carol With the exception of the Nativity and Santa Claus, there are few holiday institutions bigger than Charles Dicken’s immortal classic, A Christmas Carol.  Aside from being one of the great literary masterpieces of the 19th century, it is the most remade film in history, with more than two dozen versions produced for both the big screen and television.  It is almost impossible for anyone to get through the holidays without overhearing “God bless us, everyone” at least once.

Published in 1843 by Chapman & Hall, the original manuscript was subsequently bought and sold a half-dozen times, until coming into the possession of JP Morgan in the 1890s.  It has been a prized possessions of the Morgan Library ever since.  The Morgan Library is located on Madison Avenue, easily accessible to Fifth Avenue but just far enough away to escape the crowds.  Dicken’s manuscript is generally on display only during the holidays. 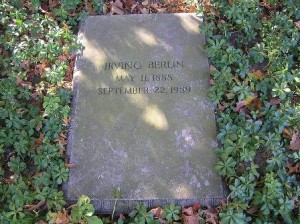 Woodlawn Cemetery is home to the gravesite of three of the most famous Christmas music composers of all time: Victor Herbert, Irving Berlin and Johnny Marks.  All three emerged on the New York City music scene in the first half of the 20th century, and each made a huge mark on American holiday music.  The first, Victor Herbert, was an Irish-German immigrant who arrived in America in 1886.  The music from his operetta Babes in Toyland is highly recognizable and closely associated with Christmas, especially the March of the Toys.

Irving Berlin, a close friend of Herbert, was a Jewish immigrant from Russia who arrived in New York in 1893.  In 1940 he penned the tune White Christmas, the most popular and successful holiday song of all time.  Over fifty million copies have been sold to date.  Second only to Berlin is the prolific composer Johnny Marks.  Marks introduced the world to A Holly Jolly Christmas, Rockin’ Around the Christmas Tree, I Heard the Bells on Christmas Day, Run Run Rudolph and Rudolph the Red Nosed Reindeer.  All three composers are buried in Woodlawn Cemetery in the heart of the Bronx, about ten miles north of Midtown Manhattan. 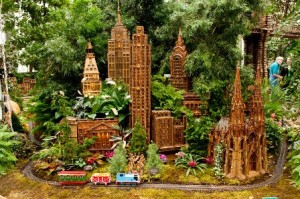 One of New York City’s newest holiday traditions is the New York Botanical Garden Train Show in the Bronx.  This show, which features enormous displays of toy trains winding their way among model replicas of New York City landmarks, is enhanced by the lush foliage of the gardens which is beautifully decorated for Christmas.  Founded in 1891 on what was formerly the Belmont Estate, the NY Botanical Garden is considered to be the premier urban garden complex in the United States.

The gardens introduced the Train Show in the early 1990s in an effort to boost attendance during the quieter winter months.  Set in the magnificent 19th century Crystal Palace, the show has grown in just two decades into an extravagant affair, with dozens of trains running on thousands of feet of track amid hundreds of miniature buildings and city landmarks.  These include everything from brownstone neighborhoods to towering skyscrapers to breathtaking bridges and are constructed almost exclusively of recovered natural materials.  The holiday trains are usually on display from the last week in November through the first week in January.

Reading of A Visit From St. Nicholas 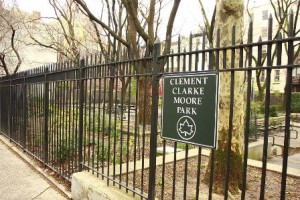 Over the centuries there has been much written about the iconic Christmas figure, Santa Claus.  But the work that truly defined the modern-day image of this jolly old elf was the poem A Visit From St. Nicholas, also known as Twas the Night Before Christmas.  Published anonymously in the Troy Sentinel in 1823, this most famous of holiday poems has been attributed to Clement Clarke Moore, a professor at Columbia University.  In the two centuries since, it has become a favorite Christmas Eve reading to children the world over.

A teacher of literature and Biblical studies at Columbia and the General Theological Seminary, Moore is ironically best remembered for this Christmas trifle that he tossed off in 1823.  After its publication, he became a household name in New York, with a small park eventually named after him.  His simple poem is largely responsible for the modern-day conception of Santa Claus.  Everything from the description of his stature to his sleigh with eight reindeer came from this poem.  The best-known annual public reading takes place at Clement Clarke Moore Park on the Lower West Side of Manhattan.

Booth where O. Henry wrote The Gift of the Magi 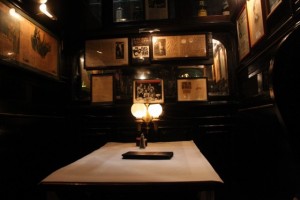 Pete’s Tavern in the Grammercy neighborhood of Manhattan is one of the city’s most storied restaurants.  Originally opened in the mid-19th century, it claims the title of being the longest continually-open pub in New York City.  Among its regulars, Pete’s Tavern boasts at least one famous writer: William Sydney Porter, also known as O. Henry, who lived down the street from 1903 to 1907.  During these years, Porter apparently visited the pub prodigiously, and according to local legend wrote his immortal holiday story here, The Gift of the Magi.

Originally published in 1905, The Gift of the Magi tells the story of a poor married couple who sell their most precious possessions in order to purchase Christmas gifts for one another.  This story of perfect love went on to become an instant classic.  Because Porter was known to have a favorite booth at Pete’s Tavern at this time, and because he was known to write there periodically, it is widely assumed that this most famous of his stories was penned here.  Whether this is true or not, his booth is by far the most requested seat in the house, especially around Christmas time.