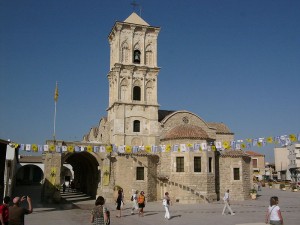 As Christianity began to spread across the Mediterranean world in the 1st century, the island of Cyprus became a natural stepping stone for early Christian missionary efforts.  It was the first place Paul visited outside of the Levant, and one of the first places outside of Judea or Syria to receive the Gospel.  Its reputation as an important Christian destination was cemented at an early date when Lazarus (and possibly his sisters), the man whom Jesus raised from the dead, relocated and settled here.  The Bishopric of Larnaka, founded by Paul and Lazarus, is one of the world’s oldest.  The Church of Agios Lazaros is home to the site recognized by many as the Tomb of Lazarus, and is the most revered Christian site on the island of Cyprus.

Christianity arrived on Cyprus at an extremely early date.  Paul visited the island around 45 AD during his first missionary journey, accompanied by Barnabas and Mark.  Because persecution of Christians had not yet spread beyond Judea, Paul met with reasonable success there, including the conversion of the territorial governor.  According to tradition, Cyprus was also visited early on by another distinguished New Testament figure: Lazarus, the man Jesus raised from the dead.  After his resurrection, Lazarus had probably become one of the best known and most recognizable figures the early Church.

Lazarus was undoubtedly the greatest living evidence of Christ’s divinity and miracles, other than Jesus himself, and it was the rumor of his resurrection that directly led to Jesus’ magnificent palm-laden reception into Jerusalem.  However, Lazarus’ very existence was an embarrassment to the ruling religious establishment.  Because of this, at some point after the Ascension, it is believed that Lazarus fled for his life to Cyprus.  Later, during Paul’s visit, he was anointed the first Bishop of Larnaka.  He lived there for the rest of his long life, strengthening the Church which he had helped Paul to establish.  After his death he was buried in Larnaka.

Cyprus remained a part of the Roman and then Byzantine Empires, with a few brief exceptions, until the 12th century.  The island grew in strategic importance during the Third Crusade when it was seized by Richard the Lionheart in 1191 and used as a naval base and transit station for Christian armies.  For the next four centuries it passed through the control of various European kingdoms and knightly orders, ending with the Venetians.  After the last Christian strongholds fell in Palestine, Cyprus became the advance Crusader base in the east.  In 1570 the Ottomans drove them from the island as well.

For many centuries Cyprus was a popular stopover point for pilgrims on their way to the the Holy Land.  Many Christians passing through in medieval times traditionally paid a visit to the Tomb of Lazarus if their ships made port at the island.  Despite its popularity, the Church of Agios Lazaros maintained a low profile for years, a fact that has helped it to survive more or less intact throughout the centuries of Islamic occupation.  Ever since Greek Christians took back control of Larnaka in the 20th century, the Tomb of Lazarus has once again been one of Cyprus’ most popular and visited Christian sites.

The Church of Agios Lazaros is a late Byzantine-era structure that has served as the chief Christian shrine of Cyprus for well over a thousand years.  Although not particularly large, it is one of the best surviving examples of the Christian architecture of the period.  Its dominant exterior feature is a four-story square belltower that appears almost more like an oriental pagoda.  The top is capped with a small cross.  An arched breezeway next to the tower gives access to the church interior.

The main sanctuary is a combination of plain Byzantine stonework and oversized baroque-era furnishings.  An enormous golden chandelier illuminates the main chamber.  The major feature of the sanctuary is the gold-bedecked Holy of Holies.  The Tomb of Lazarus actually lies in a lower chamber directly beneath the Holy of Holies, in a cramped space decorated with lamps and censors.  The marble sarcophagas bears the inscription “Lazarus, the Friend of Jesus”.

The Church of Agios is located in the port city of Larnaka within the independent portion of Cyprus, about twenty miles southeast of the capital of Nicosia.  There are generally no restrictions or difficulties in visiting Larnaka or the shrine.  The Church of Agios Lazaros is open daily from 8:00am-6:30pm (closed for lunch from 12:30pm-3:30pm).  The cost of admission is L0.50.  Web: http://ayioslazaros.org (official website)

While Cyprus boasts one of the world’s oldest Christian tombs outside of the Holy Land, time has left little in the way of other early Christian sites on the island.  Paphos, on the far side of Cyprus, is home to the ancient Byzantine Chapel of St. Solomoni, which is an extension of and entrance to one of the world’s earliest known Christian catacomb systems.