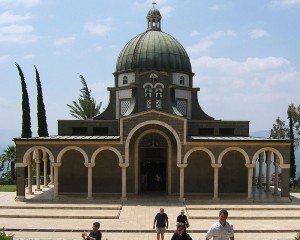 The city of Tabgha stands near the site of ancient Capernaum, the northern gateway to the Sea of Galilee and one of the principal locations of the ministry of Jesus.  Some of the most memorable chapters and miracles of the New Testament took place in the immediate vicinity of Tabgha-Capernaum.  The most famous and important site in Galilee is the Church of the Beatitudes just outside of Tabgha, where Jesus delivered what was possibly the greatest speech in history: his Sermon on the Mount.   Because the Galilee region was so central to Jesus’ ministry, and because it is a relatively trouble-free area, many Christian pilgrims make the Galilee their base when visiting the Holy Land.  This has made the Church of the Beatitudes an almost unmissable stop on many Christian visitors’ itineraries.

Located on the northeastern frontier of the ancient Kingdom of Israel, the Sea of Galilee did not play a significant role in early Jewish history.  Galilee, which was originally known as Chinnereth, formed part of the border between the tribal territory of Naphtali and neighboring Gilead.  Despite its strategic position and its important reserves of fresh water and fish, the Galilee would not rise in importance until the Roman era.  During the 1st century AD, the Galilee entered the Biblical stage as the primary region of the ministry of Jesus.

During Jesus’ time, the town of Capernaum dominated the north end of the Sea of Galilee.  It was a major center of his activities, and many of the most famous events associated with his ministry took place within a few miles of Capernaum.  Jesus performed many of his earlier miracles here, and most of the Twelve Apostles came from the Galilee region.  It was near here that Jesus fed the multitudes on a handful of loaves and fish, and it was in the nearby hills where Jesus delivered his most famous oration, the Sermon on the Mount.

Even after Jesus departed Capernaum for Jerusalem, the Galilee region remained an extremely important incubation area for the early church.  After the crucifixion, the Apostles sought refuge near Galilee, and Jesus briefly returned there following the resurrection.  Christianity took strong root in Northern Israel during the 1st century AD, though Judaism remained dominant until the early Byzantine period.  In the years following Constantine’s conversion of the empire, churches and shrines began popping up on every spot in Galilee that was mentioned in the gospels.  The area has remained a bastion of Christian pilgrimage ever since.

Tabgha is the modern day regional center of northern Galilee, the jumping off point for visits to more than a dozen local holy sites.  The region’s most important Christian site, the Church of the Beatitudes, is one of the newest major shrines in Israel.  Because of the area’s central importance to Christianity, a consortium of American religious leaders and financiers had begun to plan the construction of a massive Christian Heritage Center here a few years back.  However, because of problems in the region, the project has been put on hold for the moment.  It is expected that development will resume in at some point.

The Mount of Beatitudes, which overlooks the sites of Tabgha and Capernaum, was identified by the Byzantines as the location of the Sermon on the Mount.  Based on Biblical clues and the regional topography, this is generally accepted as the correct mountain, although the exact site is not certain.  A large, relatively flat and open steppe on the hillside is the traditional place where Jesus delivered his famous oratory.  The setting is certainly inspirational enough, and the view of Galilee below is spectacular.  Recitations of the Sermon on the Mount are naturally popular here, and can often be heard both outside and inside the church.

The Church of the Beatitudes itself only dates back to the 1930’s, and was built in part by the largesse of Italian dictator Benito Mussolini.  A small, modern structure of interesting design, it is the church’s landscaping and setting rather than the structure itself that inspires awe in its visitors.  Architecturally the building’s most interesting feature is its unique octoganal design, which symbolizes the eight Beatitudes.

The Church of the Beatitudes is located on a hillside a little less than a mile north of Tabgha, about ten miles northward along the coast of Galilee from Tiberias.  There are generally no restrictions or difficulties in visiting Tabgha, which is located in undisputed Israeli territory.  The Church of the Beatitudes is open daily from 8:00am-5:00pm (closed for lunch from noon-2:00pm).  There is no cost of admission other than voluntary donation.  Web: www.capernaum.custodia.org (official website)

A large number of major events of Christ’s ministry took place just north of the Sea of Galilee.  Almost every site is marked by a church or shrine of some sort.  One of the most important of these is the Church of the Primacy of St. Peter, where it is believed that Jesus anointed Peter as head of the Church.  The Church of the Multiplication of Loaves and Fishes stands on the site of that famous miracle.  The Church of the Ministry marks the place where Jesus lived in nearby Capernaum.  Other places of interest nearby include the remains of Peter’s House and ruins of a synagogue dating from Jesus’ time.