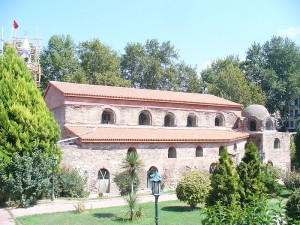 From the time of the Pentecost until the time of Constantine, Christianity existed primarily as a vast collection of largely independent communities loosely organized into bishoprics with no central authority or governing guidelines other than five arguing Patriarchs and the not-yet canonized New Testament.  Organization, beliefs and practices were informal and varied widely from place to place.  However, everything changed at the Council of Nicaea at the beginning of the 4th century.  The primary outcomes of the Council of Nicaea were the establishment of a rudimentary Church bureaucracy; and the Nicene Creed, which would become the near-universally accepted basis of doctrine of Christianity.  The city of Nicaea itself remained a bastion of the Orthodox Church up until its conquest by Islam in the 14th century.  It remains an important if little visited link in the Christian pilgrim trail in Turkey.

Throughout the 2nd and 3rd centuries Christianity continued its slow but persistent spread across the Middle East, Africa, Europe and Asia.  In most places, and especially in the Roman Empire, this expansion was met with strong resistance, often in the form of violent persecutions.  These were especially terrible in the Holy Land and in the Western Empire.  However, the Christians of Asia Minor seemed to have had fewer difficulties than their contemporaries elsewhere.  This is perhaps due to several advantages of geography.  For one thing, the heartlands of Asia Minor are rugged, and the major trade routes generally bypassed the Anatolian interior, making the Roman governmental and military presence here less intrusive.  Another reason was that Asia Minor backed up against Armenia, which was nominally independent of Rome and more tolerant of the Christians.

Whatever the reason, Asia Minor was probably one of the first sizeable regions of the empire to develop a true Christian majority.  At least four of the Apostles, as well as Paul, actively evangelized in Asia Minor in the 1st century.  John clearly recognized the importance of the region when he addressed the Seven Churches of Asia in the Book of Revelation.  When Constantine chose Byzantium for his new capital, he may have had Asia’s Christians in mind.  After the legalization of Christianity in the 4th century, Western Asia became the central focus of Christian organizational activity.  In 325 AD, Constantine called for a universal ecumenical council to be held in Asia Minor to address the problem of the Arian heresy and other issues.

Nicaea was chosen as the site of this first ecumenical council largely for political reasons.  It was close to the patriarchal seat of Byzantium, so that the emperor’s presence was strongly felt at the meetings.  It was also out-of-the-way compared to most of the other major Christian centers, thus limiting the number of bishops and patriarchs who would be in attendance.  Of the nearly eighteen hundred invitees, less than three hundred attended.  This number would almost certainly have been much higher had the council been held in Antioch, or even in Ephesus.  It would have also guaranteed a higher attendance of the Arian bishops, which was not desired by the council’s organizers.

The First Council of Nicaea was one of history’s pivotal moments.  Among the attendees were the Emperor Constantine, Athanasius of Alexandria, Nicholas of Myra and Arius.  Many traditions and beliefs of Christianity were formally established here, including the first version of the Nicene Creed.  The council also addressed the Arian Heresy and the Meletian Schism; formally established Easter as a separate holiday from the Jewish Passover; established the first Rule of Canon Law; and inspired Athanasius and others to canonize the New Testament, which would be completed later.  Another ecumenical council took place in Nicaea in 787 AD in order to address the issue of Iconoclasm.  In 1331 Nicaea was conquered by the Ottomans, after which it began to fall into a long decline.  Little now remains of its Christian population, and few pilgrims still come to visit the city’s Christian holy sites.

The Church of Hagia Sofia in Nicaea was actually constructed in the 6th century by the Byzantine emperor Justinian I, probably on the site of an earlier church.  The Second Council of Nicaea took place within its walls in the 8th century.  The first council actually took place in the now-ruined Senatus Palace.  Much of the current structure actually dates to the 11th century when it was reconstructed after having been heavily damaged by an earthquake.

Named for the magnificent Church of Hagia Sofia in Constantinople, the Hagia Sofia of Nicaea is somewhat less impressive than its namesake in Istanbul.  Much smaller in size and less spectacular in its appointments, it is nevertheless an attractive structure which evokes the Byzantine architectural style of the early Middle Ages.  Unfortunately, it has not been well cared for in the last few centuries due to the emmigration of virtually all of Nicaea’s Christians.  A large part of the ceiling and roof has long-since collapsed.  Nowadays, the interior is a generally quiet, infrequently visited place.  However, the church still has a few treasures, largely in the form of beautiful artwork on the walls and tile mosaics on the floors.

The Church of Hagia Sofia is located in the Ataturk Cad district of Nicaea, approximately forty miles south of Istanbul.  It is open daily from 9:00am-5:30pm (closed noon-1:00pm for lunch).  As of this writing the cost of admission was unknown.  Web: None Available

Most of the Christian sites in Nicaea are long gone, either destroyed by war or natural disaster or converted to Muslim use.  However, there are a few others, including the Church of the Assumption and the Church of the Dormition, both of which likely hosted delegates of the second council.  The ruins of the Senatus Palace, where the 1st Council of Nicaea was held, is now underwater at the bottom of Lake Iznik.