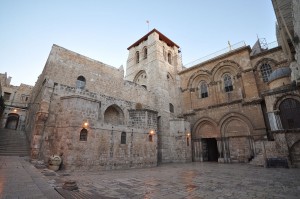 Jerusalem was the heart of Judaism for more than a thousand years before the birth of Jesus of Nazareth and the arrival of Christianity.  It was perhaps inevitable that when he challenged the authority of the Jewish priests and the Roman governor, the central battleground would be in Jerusalem.  It was here that Jesus spoke against the commercialization of the Temple, ate with his disciples at the Last Supper, was arrested, tortured, tried and executed.  Since then Jerusalem has been Christianity’s most venerated city, and Jerusalem’s many churches and shrines attest to this.  The greatest of these, the Church of the Holy Sepulchre, is by far the world’s most sacred Christian site, and the penultimate destination for millions of Christian pilgrims every year.

While most of Christ’s early life was spent in provincial Galilee, the Bible does mention at least two early visits he made to Jerusalem: once as an infant, when he was presented at the Temple; and once as a boy of twelve, when he debated with the priests.  But it wasn’t until late in his ministry that Jesus arrived for his ultimate showdown with the authorities.  Jesus spent his last hectic days in Jerusalem, from his triumphant palm-laden arrival in the city to his ignominious death on the cross on Golgotha.  The early Christian community that took root here was frequently persecuted, and Jerusalem was the site of the new sect’s first recorded martyrdom, that of Stephen.  By the time of the Great Revolt, most Christians had probably left the city.

After the beginning of the Jewish Diaspora in the 2nd century AD, Christians began trickling back to Jerusalem.  The city’s Patriarchate, founded by James the Less, became one of the five great centers of the Church, along with Rome, Byzantium, Antioch and Alexandria.  After the conversion of the Roman Empire to Christianity in the 4th century, a new interest was taken in the Holy Land’s historic sites.  The imperial family took an especial interest in Jerusalem, identifying any site that was connected in any way with Christ and adorning it with a church.  The greatest and most important of these was without question the Church of the Holy Sepulchre, built on the spot where Christ was crucified and buried.  As the new shrines went up, pilgrims from all over the Christian world began flocking to the Holy Land to see them.

Beginning in the 7th century, Jerusalem became the central focal point of the religious conflict between the Christians and Muslims, which has raged on and off ever since.  As the fortunes of the Christians in the region waxed and waned, so too did the fortunes of their shrines.  Many of the Holy Land’s churches were destroyed during the initial Islamic occupation, including the Holy Sepulchre.  However, the Christians were permitted to rebuild the Church in the 11th century AD, a project that was begun by the Byzantines and completed in 1149 by the Crusaders.  After the Muslim reconquest of Jerusalem in 1187, it was promised by Saladin that Christian pilgrims would be permitted to continue to visit the city.

Throughout the subsequent seven centuries, the Christians of Jerusalem were alternately tolerated and persecuted.  Sometimes Orthodox Christians would be welcome while the Roman Catholics were not.  There were periods when Christian pilgrims could continue to visit their Holy places, and periods when no visitors were allowed.  This situation continued until the fall of the Ottoman Empire in 1918, when Palestine became a British mandate territory and Christian pilgrims returned to the Holy Land in droves.  After the Jewish declaration of independence in 1948, a Christian community remained in Jerusalem despite the seemingly never-ending cycle of Arab-Israeli conflict.  Over the last few decades Jerusalem has drawn more Christian pilgrims to its holy sites than in any period since the Crusades, and despite ongoing problems in the region, this flood of visitors is not likely to abate any time soon.

The Church of the Holy Sepulchre dominates what is believed to be the ancient hill of Golgotha.  It incorporates not only the place where Jesus was crucified but also the cave in which he was buried.  Despite its religious importance, the Church of the Holy Sepulcher is smaller than many other less important Christian shrines due to the constricted amount of space available in the city at the time of its construction.  The main entrance to Christendom’s holiest site is surprisingly unimpressive, due in large part to its being closely hemmed in by other structures.  Its Byzantine heritage is barely evident, as much of the original building was destroyed by Muslims and restored by Latin Crusaders.  The main dome is partially obscured by a large square belltower.

The interior church layout is more impressive.  The Sepulchre is richly decorated with a multitude of chapels, artifacts and artwork that reflect numerous Orthodox and Catholic contributions over the centuries.  Most of the chapels and points of interest are directly related to Christ’s death, including the last five of the fourteen Stations of the Cross.  Most of these are located in the Chapel of Golgotha, built on the spot where Christ was crucified.  They include the place where he was stripped of his garments (10), where he was nailed to the cross (11), where the cross was erected (12) and the spot where his body was prepared for burial (13).  The highlight of the church, however, is the Holy Sepulcher itself (14), where Jesus was laid to rest in the donated tomb.  The Sepulcher consists of an enclosed stone shrine located directly beneath the great dome.  The cave where Jesus was buried lies beneath.

The Church of the Holy Sepulchre is located in the Christian Quarter in the heart of Jerusalem’s Old City, the ground zero of Israel’s tourism industry.  Despite its location, visiting the church is generally neither difficult nor dangerous, and the Sepulchre has heretofore not been directly involved in the problems that engulf the area.  The Church is managed jointly by the Catholic, Orthodox and Armenian churches and is open to all visitors.  However, the complex jurisdiction arrangement over the church’s interior may mean certain restrictions for certain visitors at certain times.  In general the Sepulchre is open daily from 5:00am-7:00pm.  There is no cost of admission.  Web: www.holysepulchre.custodia.org (official website)

Many of Jerusalem’s most important Christian sites are located along the Via Dolorosa, the traditional pilgrimage walk associated with the crucifixion.  The Tower of Antonia, where Jesus was condemned, is the 1st Station.  The Condemnation Chapel, where Jesus was sentenced, is the 2nd Station.  The Armenian Catholic Patriarchate marks the 3rd and 4th Stations, where Jesus made his first stumble and where he saw his mother.  Further on are the 5th, 6th and 7th Stations, where Simon volunteered to carry the cross, where Veronica dried Christ’s sweat and blood with her now-famous veil, and where Jesus stumbled for the second time.  The Greek Orthodox Convent stands over the 8th Station, where Jesus comforted the weeping women.  A Coptic Church marks the 9th Station where he stumbled for the third and last time.  The remaining stations are located within the Sepulcher itself.  Among the multitude of other sites within the city are St. Anne’s Church, built on the traditional site where the Virgin Mary was born and where the Pool of Bethesda is located, and St. Alexander’s Church.