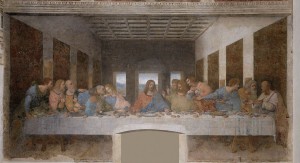 The Church of Santa Maria Delle Grazie is a former 15th century Dominican Convent.  Heavily damaged by Allied bombs during World War II, this church and convent might have been condemned to the dustbin of history if it wasn’t for the presence of a certain curiosity which is painted on the wall of the old convent refectory: Leonardo DaVinci’s The Last Supper, one of the greatest works of Christian art in the world.  Because of this painting, which miraculously survived the war, the Church of Santa Maria Delle Grazie was saved and reconstructed, to the everlasting joy of Christians, art-lovers and conspiracy theorists everywhere.  Hundreds of thousands of these now travel to Milan every year to ogle one of Leonardo DaVinci’s greatest masterpieces.  The Church of Santa Maria Delle Grazie is a UNESCO World Heritage Site

The Italian Renaissance was defined first and foremost by its art, and its art was defined primarily by the religious and historical themes of the Bible.  For the better part of three centuries, Italian masters churned out a seemingly endless number of works based on the stories of both the Old and New Testaments.  It has been suggested that as many as half of all paintings, exluding portraits, executed during the Italian Renaissance were inspired by the Bible.  Who knows how many paintings there are of the Madonna and Child; or the passion of Jesus Christ; or the martyrdoms of the countless saints?  The efforts of a thousand Renaissance artists now fill the museums, palaces and churches of Europe.  And the most famous of all of these is The Last Supper by Leonardo DaVinci.

To say that Leonardo DaVinci was the defining personality of the Renaissance is an understatement.  From art to architecture, engineering to botany, he was a master of all disciplines.  Born 1452 in Tuscany not too far from Florence, DaVinci apprenticed in the workshop of Verrocchio.  His first known artistic effort was collaboration with Verrocchio on his Baptism of Christ.  This was just one of the many religious works he would undertake in his lifetime.  Other major paintings based on the Bible that he executed include The Adoration of the Magi and The Virgin of the Rocks.

DaVinci’s most famous religious painting, and perhaps the second most famous piece of Biblical art in the world after The Creation of Adam by Michaelangelo, is The Last Supper.  Commisioned by a Dominican convent in Milan, DaVinci painted the enormous mural on the wall of the church refectory.  A masterpiece of detail and balance, this enormous painting soon became the wonder of the convent.  Visitors began to seek out the abbey and gaze at what would later be hailed as one of DaVinci’s crowning achievements.

Unfortunately, he did not adequately prepare the painting for a long lifespan.  In less than a century it had become so flaked and faded that it was already unrecognizeable.  A doorway was callously cut right through the middle of the mural in 1652, though this was later removed.  A number of repairs and restorations were undertaken over the years, but these generally made the situation worse.  An Allied bombing raid in World War II nearly finished it off.  It was not until the late 20th century that experts using the most advanced techniques were finally able to restore the painting to the point where it can now be enjoyed by the throngs of pilgrims, art-lovers and DaVinci Code enthusiasts who come to see it every year.

The Church of Santa Maria Delle Grazie is a brown- and beige-brick edifice nestled among a beautiful older neighborhood on the west side of Milan.  It consists of the main church structure as well as elements of the original convent.  Most of the church dates from the 1460s, but considerable repairs were necessary after the war.   The interior of the sanctuary is a neo-gothic architectural gem, with high vaulted ceilings and exquisite scrollwork throughout.

DaVinci’s painting The Last Supper is located in the refectory on the only wall that was miraculously not destroyed during the war.  Its survival was due in large part to the sandbags which had been carefully heaped around it in order to protect it from damage.  The painting is very large (15×29 feet) and dominates the rear wall of the refectory.  It was executed on a sealed stone wall, and has not held up very well.  The painting as it appears now dates largely from the last restoration completed in 1999.

The Church of Santa Maria Delle Grazie is located on the west side of Milan not too far from a number of major tourist attractions.  It is open Tuesdays through Sundays from 8:00am-7:30pm.  Admission is E6.50.  Web: www.grazieop.it (official website)

As is typical of many Italian cities, Milan is brimming with beautiful churches, including at least three which boast elements dating back to the Roman period: The Church of San Lorenzo Maggiore, the Basilica di Sant’Eustorgio and the Basilica di Sant’Ambrogio.  The Cathedral of Milan is the third largest in Europe after St. Peter’s Basilica in Rome and the Cathedral of Seville.