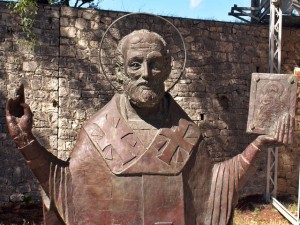 Nicholas of Myra is quite possibly the most beloved post 1st century Christian figure.  For the last seventeen centuries there have been dual traditions concerning the enormously popular Nicholas.  The first is that of the great Christian theologian whose presence dominated the First Council of Nicaea and whose influence laid much of the groundwork for the beliefs and organization of the Church; the second is that of Santa Claus, the secret bringer of gifts and the patron saint of children.  He is universally cherished among Catholic, Orthodox and Protestant Christians alike.  Other than Christ, Mary, Paul and the Apostles, no other figure in Christendom is as venerated as a patron saint or has more churches and cathedrals named in his honor.  Today, after being forgotten for centuries, the local Muslim population of Myra is making a major effort to attract Christian pilgrims to Nicholas’ ancient church and restore the city’s reputation as the city of Nicholas.

Nicholas was born sometime in the 3rd century in the City of Patara in Asia Minor.  According to legend he decided to devote his life to the Church at an early age, and his uncle saw to Nicholas’ religious education and upbringing.  Eventually Nicholas moved to the larger city of Myra where he pursued theological studies under the tutelage of the city’s bishop.  As a young man he was ordained as a priest, and much of his early tenure focused on the survival of the Church during the persecutions of Diocletian.  It is likely that Myra’s bishop was put to death at this time, because by the time the persecutions had come to an end, Nicholas had succeeded to that position. 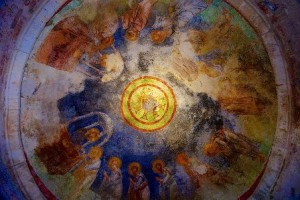 After Constantine’s legalization of Christianity, Nicholas went through a transformation from beloved church leader to passionate champion of Christian orthodoxy.  One of his first acts after Constantine’s declaration was to organize the ransacking and destruction of the city’s pagan temples.  His attentions were soon turned against the Arian heresy.  Nicholas was among the first Church leaders who strongly rejected Arianism and called for an ecumenical meeting to decide the matter.  Seeing the dissension in the recently legalized Church, Constantine called the Council of Nicaea to settle the matter.  Nicholas attended of course, and was one of the most vocal denouncers of Arius.  At one point, Nicholas grew so angry during the meeting that he started a brawl and struck Arius in the face.

Although he was kicked out of the council and even briefly jailed, his arguments won the day.  After a month of deliberation, the Arians were formally denounced.  In the wake of the Council of Nicaea, Nicholas had become one of the most popular bishops in the Roman world.  He spent much of the rest of his life opposing Arianism, which continued to spread and thrive even after its denouncement.  But his efforts kept much of Asia Minor free of the heresy.  Apparently Constantine, who himself ultimately became an Arian Christian, was nevertheless still so impressed with Nicholas that he neither hindered the popular bishop nor forced the Arian view on the Church as a whole.  Nicholas died a hero of Christian Orthodoxy sometime in the mid-4th century.

In the years after his death, the legacy of Nicholas grew even larger than his large life.  The legend of Nicholas as Santa Claus began during his lifetime, when it is believed that he secretly gave away money and gifts to the poor and the children of the community.  His family was apparently wealthy, and his gifts came out of his inheritance.  In one famous anecdote he gave three bags of gold to a poor man as dowry for his three daughters’ weddings.  In later years, the tradition of giving small gifts on his feast day, December 6th, fell within the period of Advent, and by the 17th century was inextricably tied to the Christmas holiday season.  If the legends of Santa Claus are true, than Nicholas is today the world’s oldest and busiest saint.

The Church of St. Nicholas in Myra, now Demre, once the seat of one of Asia Minor’s most important bishoprics, has been neglected for many years.  Originally constructed in the 6th century on the site where Nicholas once lived, the church has been renovated on numerous occasions, including one major effort in the 1800s under the patronage of the Russian Czar.  By the late 20th century, the church had become a splendid ruin.  However, that is currently changing.  Because the Turkish Ministry of Culture sees the church as a major potential tourism draw, it has recently undertaken a massive restoration effort in conjunction with the Orthodox Patriarchate of Russia.

Despite its ancient age and poor condition, a significant portion of the original 6th century structure still exists.  The interior of the church still features ancient art and paintings on the walls as well as surprisingly intact tile mosaics on the floor.  The highlight of the church is the sarcophagas that once held Nicholas’ remains.  Although the body is now in Bari, Italy, the empty tomb is still venerated by the local Christians.

The Church of St. Nicholas is located on the outskirts of Demre, about two-hundred and fifty miles south of Istanbul.  As of this writing, restoration and archaeological work at the site of the Church of St. Nicholas were still ongoing and likely to continue for several years.  That said, the city of Myra is clearly interested in increasing the number of Christian visitors to the city.  Because of this, tourism infrastructure in Myra is improving at a rapid rate.  Because of the ongoing restoration work, visitor information was not available as of this time.  Web: www.stnicholascenter.com (official website)

Most of Byzantine Myra is now long gone.  However, there are a few sites of Christian interest remaining, including the old Roman Theater, where it is believed that Nicholas once preached.  Modern tributes to Nicholas include a magnificent bronze statue of the saint donated by the Russian Orthodox Church, and a somewhat cheesy plastic statue of Santa Claus donated by the city.  The Birthplace of St. Nicholas is located in the nearby town of Patara.  The sites of Myra and Patara, and Bari in Italy, are collectively the heritage sites of St. Nicholas.