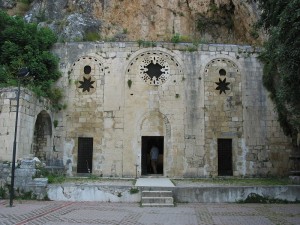 The Church of St. Peter in Antioch, or Antakya, may very well be the world’s oldest place of Christian worship still in active use.  Built into the side of a slope on Mount Starius, it was the seat of the first patriarchate established outside of the Holy Land.  According to tradition, it stands on the spot where Peter the Apostle delivered the first sermon in the city, and it was here that the term ‘Christian’ was used for the first time in reference to the followers of Jesus Christ.  The Church of St. Peter was rebuilt and expanded on several occasions, but is remarkable for the fact that some of the masonry and artwork has been reliably dated to the 1st century AD, making it the oldest Christian church building still in existence.  Unfortunately, because of its remote location in a solidly Muslim region, it receives relatively few Christian visitors.  Nevertheless the site is well preserved under the auspices of the Turkish Department of Museum Management, and is open to all who do make the journey.

The ancient city of Antioch was one of the great metropoli of the Roman Empire during the early Christian period.  A major terminus of the Silk Road, it was a phenomenally wealthy city and had a reputation for sin and vice.  This was well known to the Apostles when they decided to send the greatest of their number, Peter, to personally evangelize in the Roman Empire’s contemporary Sodom.  Peter probably arrived in Antioch sometime between 40 and 45 AD, and soon a vibrant Christian community was thriving there.  This community later became the foundation of the Patriarchate of Antioch, the politically most important center of church activity from the time of the destruction of the Great Temple in Jerusalem in 70 AD until the Council of Nicaea in 325.

Peter was not the only major early church figure to live and work in Antioch.  According to the New Testament, Paul spent a year in Antioch with Barnabus, and it was during their tenure working and preaching here that the term ‘Christian’ was coined.  This seemingly minor event was actually a major development in the identity of the Church as an independent entity from Judaism.  According to tradition, it was Barnabas who came up with the name.

The first actual church building in Antioch dates from the time of Peter and consisted primarily of a small cave on the mountainside.  The extent of the original structure is uncertain, but it was probably no bigger than a small chapel.  Peter apparently worked here for several years before departing for Rome sometime in the middle of the 1st century.  He was succeeded by some of the most famous of early Church fathers, including Evodius and Ignatius.  According to local Christian lore, they continued to work from Peter’s original church on the mountain.  However, within a century or so, the Patriarchate of Antioch grew so large and so important that the city’s bishops eventually had to establish other, larger church buildings.

Nevertheless the Church of St. Peter was a popular pilgrimage shrine almost from the moment of its inception.  Over the years it managed to survive the long Muslim occupation of the region, and continued to be an important stopping point for Christian pilgrims on their way from Asia Minor to the Holy Land.  It was expanded and embellished during the Crusader period, and again during the Napoleanic period.  For a while it was under the jurisdiction of Capuchin monks who maintained it for use of the local Christians and visitors who still found their way to the ancient shrine.  After the breakup of the Ottoman Empire, many of Antioch’s Christians fled to Syria, which was then occupied by France.  The Church of St. Peter was taken over by the Turkish government, and it has been run as a museum ever since.

The Church of St. Peter is not only possibly the world’s oldest continually active church building; it is also one of the oldest surviving buildings in Antioch.  It stands on a ledge on the slope of Mount Starius, and affords a wonderful view of the modern-day city of Antakya.  About half of the current structure dates from the 1860s when it was renovated and restored by the Catholic Church.  The rest dates back to the original construction or the Crusader additions.

Most of the church is carved into the side of the mountain.  However, an imposing façade was constructed across the entrance centuries ago.  Although the construction of the façade appears to date from Byzantine times, it was in fact mostly restored in the 19th century, though earlier materials and designs were used.  A broad terrace in front of the façade overlooks the city.  The church interior, once a small cave, was carved out and extended several times, mostly by the Crusaders.  Some of the interior mosaics and frescoes date from the earliest days of the church.  An interior tunnel is also thought to date from early Christian times.  Numerous tombs have been discovered at the site over the years, both inside and outside the shrine, though the identity of the corpses has not been established.

The Church of St. Peter is located a bit of a distance outside of modern Antakya, about eighty miles east of Aleppo in Syria.  Public transportation to the area is limited, so special arrangements may be necessary in order to reach the site.  It is open to the public daily from 8:00am-5:00pm (closed for lunch noon-1:30pm).  The cost of admission is US$3.50.  Web: None Available

Virtually nothing remains of the Antioch of Peter’s day, Christian or otherwise.  However, the city of Aleppo, not too far across the border in Syria, is home to the ruins of the Basilica of St. Simeon, one of the region’s most popular Christian mystics.  The Church of St. Paul, where that early Christian missionary was born, can be found in the city of Tarsus, about a hundred miles away along the Turkish coast.