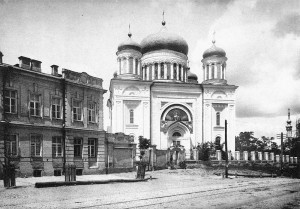 The City of Kiev, one of the last major bastions of Pagan worship on the eastern frontier of Europe, did not convert to Christianity until the very end of the first millennium AD.  However, in the following centuries, when Kiev was the capital of the fledgling Russian kingdom, it served as the seat of the Russian Patriarchate.  Because of this Kiev is considered the birthplace of the Russian Orthodox Church, now the world’s largest Eastern Orthodox denomination.  Little is left of the Church of the Tithes, the first Russian Orthodox Church building, but to many Russian and Ukrainian Christians, Kiev remains and important spiritual center and place of pilgrimage.  The site of the Church of the Tithes is part of the Cathedral and Monastic Buildings of Kiev UNESCO World Heritage Site.

During the early Middle Ages, Orthodox Christianity slowly worked its way northwards and eastwards through Europe from the Byzantine Empire and Greece.  By the 10th century Christianity had arrived at the frontiers of the Rus peoples along the Dneiper River.  At the time, the Rus represented a mix of the Slavic peoples of the Russian Steppe and Viking colonists from Scandinavia.  During the late 10th century, Vladamir, a Viking warlord and dedicated pagan, carved out a sizeable kingdom for himself that stretched from Novgorod to Kiev.  This small realm would eventually grow into the sprawling Russian Empire and its church the largest Patriarchate of Eastern Orthodoxy.

Despite his paganism, Vladimir entertained ambassadors from a number of religions vying for influence in the region.  This was done at the behest of his nobles, who believed that a state religion would strengthen the kingdom and their own influence.  At first noncommittal, he was ultimately most impressed with Eastern Orthodox Christianity.  In order to sweeten the deal, Emperor Basil II in Constantinople offered up his sister Anna in marriage.  Vladimir accepted, and was promptly baptized.  In 988, Vladimir returned to Kiev and initiated an all-out campaign to exterminate paganism.  In his enthusiasm he encouraged the entire population of the city to turn out at the Dneiper River, where followed what was probably the largest mass-baptism in history.

The Baptism of Kiev was quickly followed by similar mass rituals throughout Vladimir’s lands, and within a year the majority of the Rus were converted to Christanity.  In celebration of the event, Vladimir then proceeded to have every shred of evidence of paganism, from temples to idols completely destroyed.  Over the remaining decades of his life, Vladimir used his considerable resources to establish churches and monasteries throughout Rus.  The first, and greatest, was the Desyatynna Church, or Church of the Tithes, named for the tithe that Vladimir donated for its construction, near the place where the mass baptism took place.  This large stone church, the first in Russia, was for many years the spiritual center of the Russian Orthodox Church.  After their deaths, Vladimir and his wife were buried here.  For his achievements in converting the last frontier of Europe to Christianity, Vladmir was eventually canonized.

The Church of the Tithes stood for two and a half centuries and was for many years the greatest pilgrimage center in Russia.  However, in 1240 it was sacked and destroyed by the Mongols, after which the preeminence of the church in Kiev never truly recovered.  Soon afterwards, the Russian Patriarch relocated further north to the relative safety of Moscow.  Two later churches, built on the same site in the 17th and 19th centuries, were also subsequently destroyed.  Nevertheless the site where Vladimir’s church once stood is well marked.  It is still revered to this day.  Kiev is currently considering the possibility of building yet another new church on the site.

For all intents and purposes, there is nothing left of the Church of the Tithes.  The original outline of the foundation is preserved in a red brick border on the great plaza in front of the 18th century St. Andrew’s Church.  Nevertheless pilgrims and visitors do visit the site, usually in conjunction with a visit to St. Andrew’s Church or the St. Sophia Cathedral.  The plan to rebuild the church is extremely controversial, but it appears that it will be going forward and it is expected that a new building will be completed sometime in the next decade.

Greek, Russian and Ukrainian architects are currently trying to reconstruct a design as close to the original as possible, basing their efforts on the foundation outline and several centuries-old sketches.  It is anticipated that the new structure will resemble a drawing made by one Abraham Van Westerfeld in the 17th century, encorporating Greek and Slavic design elements, with a multi-domed roof.  There are also expectations that the relics of Vladislav I, long relocated to other churches, will be replaced here upon completion.

The memorial outline of the Church of the Tithes is close to the city center of Kiev and easily reached either on foot or by public transportation.  Obviously it is an open site, and there is no charge for admission.  Web: www.visitkievukraine.com (unofficial tourism website of Kiev)

Kiev is home to a wealth of noteworthy Christian sites, starting with the nearby St. Andrew’s Church, supposedly built on a site where Andrew the Apostle first preached Christianity in the area.   St. Sophia’s Cathedral, built in the 11th century, was the actual Patriarchal seat in Kiev until it was removed to Moscow.  Also founded in the 11th century, the Kievo-Pecherskaya Monastery is the oldest in Russia.  It consists of a massive underground cave complex including churches and living areas that stretch out along more than a mile of tunnels.