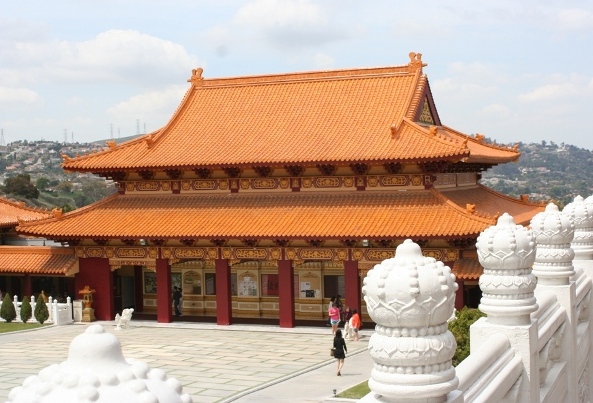 As American cities go, Los Angeles does not immediately jump out as a location particularly famous for its churches and other religious sites.  But there are few places that can match the City of Angels in terms of religious diversity and architecture.  Christian places of worship are of course well represented.  But beyond the churches, which range from centuries old missions to space age cathedrals, Los Angeles boasts a wealth of spectacular religious architecture the likes of which are very difficult to find beyond California.

Some of America’s most beautiful synagogues can be found in Los Angeles.  What are arguably the most breathtaking Buddhist and Hindu temples in the United States are nestled in the hills around the city.  And a stunning chapel designed by the son of Frank Lloyd Wright looks out over the Pacific Ocean.  Unfortunately for pilgrims, the Los Angeles area is huge, and the best religious sites of the city are very spread out.  So be prepared to drive if you want to see them all.

Because of the way Los Angeles is laid out, there’s no real logical way to map out a route.  So perhaps the best place to start is where the city started, at the Mission San Gabriel Archangel (428 Mission Drive, San Gabriel).  This mission, the fourth founded by the Spanish in California, was built in 1771 and more or less marks the beginning of the history of the city.  Much of the original church is intact, and a museum on site houses artifacts from the mission’s history.

A short drive down South Ramona Street and west on I-10 into downtown, about 10 miles total, takes visitors to the Cathedral of Our Lady of the Angels (555 West Temple Street, Los Angeles).  This modern architecture masterpiece, completed in 2002, replaced an earlier cathedral that was damaged in an earthquake in 1994.  A number of Hollywood luminaries, including actor Gregory Peck, are buried in the mausoleum beneath the cathedral.

Continuing through downtown Los Angeles along Grand Avenue and Wilshire Boulevard, about four miles total, the next stop is the Wilshire Boulevard Temple (3663 Wilshire Boulevard, Los Angeles).  This magnificent synagogue, which replaced an earlier 19th century building, is a relic of the Golden Age of Hollywood.  Funding for the building was provided by such Tinsel Town luminaries as Louis Mayer, Irving Thalberg and the Jack Warner.

A two mile drive south along Western Avenue gets to the next stop in downtown, the First African Methodist Episcopal Church (2270 Harvard, Los Angeles).  This historic church, the first African congregation in California, was founded in 1872.  It is nationally known for its social activism and its local outreach, and was named a Point of Light by the first President Bush.

Continuing outside of downtown, the next part of the drive continues along I-10, then the Pacific Coast Highway and up a winding road into the Malibu Hills, about thirty miles total.  There pilgrims will find the Malibu Hindu Temple (1600 Las Virgenes Canyon Road, Calabasas).  This breathtaking complex, one of the largest Hindu Temples in the Western Hemisphere, is covered in intricate carvings and statutes and surrounded by lush greenery.  It is easily among America’s most exotic religious sites.

Doubling back east, the next leg of the drive is along US-101 and CA-60 to Hacienda Heights, about sixty miles.  This takes visitors to LA’s other great shrine of eastern faiths, the Hsi Lai Temple (3456 Glenmark Drive, Hacienda Heights).  This sprawling Buddhist temple in the hills above Hacienda Heights looks as though it were lifted straight out of 17th century China.  It is one of the largest and most magnificent such temples outside of Asia.

From the temple, a straight shot south on CA-39 and I-5, about seventeen miles, goes to Garden Grove and Christ Cathedral (13280 Chapman Avenue, Garden Grove).  Formerly known as the Crystal Cathedral, this once-Protestant institution is now the seat of the Catholic Diocese of Orange County.  The complex, completed in 1980, is the largest glass and steel church in the world.  The matching glass and steel bell tower thrusts upwards hundreds of feet like a giant sword.  The church organ is one of the ten largest in the world.

The grand finale can be reached by driving nearly due west along CA-22 and I-72 straight out to Rolling Hills, about 34 miles.  There, on a hillside overlooking the Pacific Ocean is the Wayfarer’s Chapel (5755 Palos Verdes Drive, Rancho Palos Verdes).  This building, designed by Lloyd Wright, consists almost entirely of wood framing and windows.  Those within are ensconced in nature, surrounded by lush greenery and views of the Pacific.  It is one of America’s most popular wedding venues.