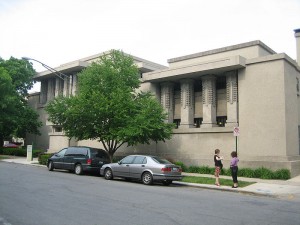 Frank Lloyd Wright, arguably the greatest architect in American history and one of the pivotal figures of the modern architecture movement, made his impact on modern church design as much as he impacted everything else (homes, commercial buildings, hotels and so on).  Over the course of his career Wright designed over a dozen churches and other religious structures, some of which were so ground breaking that they set the stage for whole new concepts in church design in the second half of the 20th century.  Among the greatest of these, in the author’s humble opinion, are Unity Temple in Illinois, Beth Sholom Synagogue in Pennsylvania, and the Annunciation Greek Orthodox Church in Wisconsin.

Frank Lloyd Wright, America’s most storied architect, was born in 1867.  His career ran from the 1880s until his death in 1959, during which he designed and built hundreds of phenomenally innovative buildings.  His earliest projects, on which he was a draftsman, were religious buildings, and included the Unity Chapel in Spring Green, Wisconsin, and the All Souls Church in Chicago.  Wright was kept very busy in the Chicago area following the Great Fire, where he made a local name for himself. 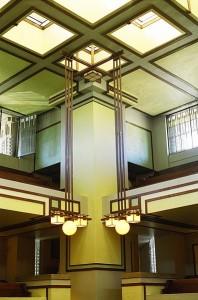 After becoming a full-fledged architect, Wright did relatively few churches, but one of these was considered one of Wright’s major early works: Unity Temple in Oak Park, Illinois.  In the early 1900s, the Unitarian Church of Oak Park burned down, and Wright was commissioned to design a new building.  Wright, himself a Unitarian, designed something entirely new: an all-concrete structure with design elements that had never been seen before.  The Temple is now generally recognized as the first true modern building, and has been hailed as one of the most important architectural achievements in the history of the United States.

Throughout his long career, Frank Lloyd Wright did relatively few churches compared to his other projects.  He became more active in religious architecture in the 1940s, designing such masterpieces as the Community Christian Church of Kansas City and the Unitarian Society Meeting House in Shorewood Hills, Wisconsin.  But some of his best works were yet to come. 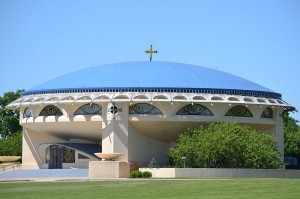 During the 1950s, Wright designed some of his finest religious buildings, such as the Pilgrim Congregational Church of Redding, California and the First Christian Church of Phoenix.  But the two masterpieces of this period were the spaceshipesque Annunciation Greek Orthodox Church in Milwaukee; and pyramid-crowned Beth Sholom Synagogue in Elkins Park, Pennsylvania.  These last two buildings were among his crowning achievements, and were among the very last constructions he personally worked on.

Unity Temple is considered one of Wrights definitive achievements, and is currently under consideration to become a world heritage site.  The structure, built entirely out of reinforced concrete, consists of a community building and the main temple.  The temple sanctuary is unusual in that it is built in the shape of a square with four equal wings of balconies and a centralized podium.  The stained glass windows are high on the walls to minimize noise, and they are done in browns and greens to evoke a natural setting.  Unity Temple is located in the heart of Oak Park on the west side of Chicago, approximately eight miles from downtown.  Web: www.utrf.org (official website).

Beth Sholom Synagogue is the only synagogue designed by Wright.  It is also one of Wright’s most distinctive buildings.  The synagogue’s iconic features is the pyramid-like roof, which incorporates elements reminiscent of Mesoamerican and Asian architectural styles.  The synagogue incorporates many symbolic elements, such as the beige floor which symbolizes the Exodus in the desert.  Beth Sholom Synagogue is located in Elkins Park, approximately ten miles north of Philadelphia.  Web: www.bethsholomcongregation.org (official website).

Annunciation Greek Orthodox Church is an out of this world structure, as it literally resembles a classic saucer-shaped UFO.  The definitive element is the massive blue domed-roof which spans the entire structure and crowned by a cross.  Interestingly, this church was a major inspiration for modern mosque architecture throughout the Middle East in the second half of the 20th century.  Annunciation Greek Orthodox Church is located on the northeast side of Milwaukee approximately eight miles from downtown.  Web: www.annunciationwi.org (official website).

Most of Frank Lloyd Wright’s churches are located in the American heartland, including his first work, the Unity Chapel, and the Unitarian Society Meeting House, both in Wisconsin; and the Community Christian Church in Kansas City, Missouri.  Another magnificent church, the Wayfarer’s Chapel in Palos Verdes, California, is often wrongly attributed to Wright, when in fact it was designed by his son.