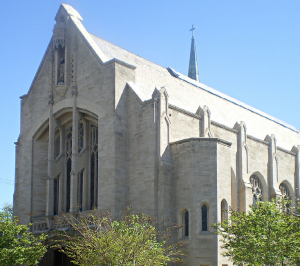 Hollywood loves a great place to film on location, and not surprisingly some of the best filming locations are religious sites. Interestingly, I had a very hard time finding religious films which prominently featured churches unless they were comedies (case in point, the majority of movies about organized crime have at least one church in them, while virtually no traditional Christmas/holiday movies feature a church scene; weird).  Anyway, here are some of America’ most recognized churches thanks to Hollywood:

Glencoe Union Church is a stately building tucked away in the John Hughesesque suburb of Glencoe about ten miles north of Chicago.  Originally a Congregational church, Glencoe was rebuilt in 1911 after a fire destroyed the first building.  The new church was rededicated as an inter-denominational congregation.

Glencoe Union Church vaulted into the Hollywood spotlight following its appearance in the 1984 cult classic film, Sixteen Candles.  Hosting one of the most iconic and outrageous wedding scenes of all time, which included the bride blitzed on painkillers and a hilarious rendition of Here Comes The Bride performed by Zelda Rubenstein, the church also witnessed the movie’s climactic romantic moment.

Prevent the Negation of All Existence at Sts. Peter and Paul Church (Dogma)

The Sts. Peter and Paul Church in East Liberty outside of Pittsburgh is an historic church that looks as though it may soon be headed for a sad ending.  Completed in 1890, it served the community of German Catholic immigrants and their descendents for much of the 20th century.  But attendance fell off, and after being sold by the Church in the 1990s has largely been abandoned.  It is now in a state of severe disrepair.

In 1999 Sts. Peter and Paul was used a stand in for St. Michael’s Church (located in Red Bank, New Jersey) in the movie Dogma.  It was before the doors of this church that two renegade angels challenged the Judgment of Heaven and where they were defeated in their rebellion by God (Herself) as portrayed by Alanis Morissette.

The St. Augustine Catholic Church in Philadelphia was built in 1847 in response to the city’s growing Irish Catholic population, as well as in response to the anti-Catholic riots of 1844.  It replaced an earlier church completed in 1801 which was almost completely destroyed by a mob during the riots.  This dark chapter of the church’s history inadvertently made it a perfect filming location for one of the great horror movies of all time.

In 1999, St. Augustine’s became the backdrop for some of the most iconic moments in the film The Sixth Sense.  It was here that young Cole found temporary refuge from his curse of being able to see the dead, despite the church’s own true grisly history.  Scenes from the 2007 film Shooter were also filmed here.

The United Methodist Church traces its roots to Plano with an early congregation established in the 1850s.  The current church building was completed in 1906, and has been actively in use by the Methodist Church ever since.  However, it may confuse some visitors expecting a Catholic Church thanks to Hollywood.

In 2013, the town of Plano was used as a stand in for the town of Smallville in the blockbuster film Man of Steel.  A reboot of the entire DC superhero universe, there is a pivotal scene in which Superman, in his guise as Clark Kent, has a confession-style conversation with the local priest.  Interestingly, this may be one of the most religiously Christian scenes ever to appear in a superhero film.

St. Brendan Catholic Church in Los Angeles has been around since the early 20th century and has periodically appeared in films for almost all of its existence.  The church was completed in 1927, the same year that The Jazz Singer was released.  In short, St. Brendan’s has been an iconic part of Hollywood’s skyline since the beginning of talkies, and has a fascinating resume to match.

After showing up in the Our Gang comedies in the 1930s, St. Brendan Catholic Church appeared in several major films over the years.  Its most famous appearance was in the climactic scene of the 1953 sci-fi classic War of the Worlds, as the last refuge where humans gathered to pray desperately for salvation.  It later showed up in the movies Armageddon and Spider Man 3, and perhaps most notably as the location of a cancer support group meeting in the movie Fight Club.