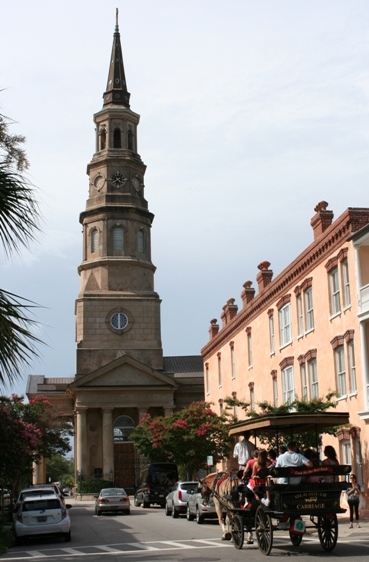 Charleston, South Carolina is one of America’s great historic church cities.  Charleston’s nickname, the ‘Holy City’, has been attributed to the forest of immense church steeples that sprout from the city skyline as seen from the harbor.  This is particularly true in the historic district where local ordinances keep modern buildings and building heights to a minimum.

While the ‘Holy City’ moniker may be a bit of an exaggeration, when it comes to truly historic churches, Charleston does in fact punch way above its weight for a city of its size.  It is home to some of the oldest churches and congregations in the American South, not to mention one of the country’s oldest synagogues.  There are churches whose congregations number Founding Fathers among their members, including some buried in their graveyards.  And there is an historic church that found itself at the center of a national tragedy a few years ago.

Probably the most logical place to start a tour of Charleston’s historic churches is at the corner of Water Street and Meeting Street, in the oldest section of the city just two blocks from the waterfront.  First Baptist Church (48 Meeting Street) is home to the oldest Baptist congregation in the South.  Founded by Baptists who relocated here from Maine in 1682, the current Greek Revival building was completed in 1820.  The congregation is now part of the Southern Baptist Convention.

Heading north there is the First Scots Presbyterian Church (53 Meeting Street), then after another long block is St. Michael’s Episcopal Church (71 Broad Street).  The original St. Michael’s Church dated from the 1680s, but this was rebuilt on a grand scale in the Georgian style in the 1750s.  Two members of the congregation, Charles Pinckney and John Rutledge, were signers of the United States Constitution.  Both are buried in the church graveyard.

North of St. Michael’s are several clusters of churches.  A few blocks to the west is the Cathedral of St. John the Baptist (120 Broad Street), seat of the Roman Catholic Diocese of Charleston; and a block north of this is the Unitarian Church (4 Archdale Street) and St. John’s Lutheran Church (5 Clifford Street).  Three blocks north of St. Michael’s is the Circular Congregational Church (150 Meeting Street).  This odd Romanesque building is known for its round shape and round towers, both highly unusual in 19th century American church architecture.

A block to the east of Circular Congregational are two more must see sites.  The first is the French Huguenot Church (136 Church Street).  This church was founded directly by Calvinist Protestants fleeing from France in the late 17th century.  The current Gothic Revival building was completed in 1844.  Just north of the Huguenot Church is St. Philip’s Episcopal Church (142 Church Street).  Thanks to its location at an odd bulge in Church Street and its immense bell tower it is one of the most distinctive and recognizable churches in the city.  The tower once doubled as a lighthouse for ships in the harbor.

Continuing north on Meeting Street, a left onto Hasell Street leads to St. Mary’s Roman Catholic Church (89 Hasell Street).  The first Roman Catholic parish to be founded between Virginia and Florida, the current building, completed in 1839, is the oldest Catholic church standing in the city.  Across the street is one of American Judaism’s great treasures: Congregation Kahal Kadosh Beth Elohim (90 Hasell Street).  This synagogue is home to one of the oldest Jewish congregations in America.  The Greek Revival building which houses the sanctuary was completed in 1840, making it one of the oldest synagogues in the South as well.

Five blocks further north along Meeting Street and a right onto Calhoun Street leads to Mother Emanuel African Methodist Episcopal Church (110 Calhoun Street).  This historic African church, built in the 1890s, was the scene of horrific violence on June 17, 2015.  On that day a gunman marched into the church and, under the guise of attending a prayer group, shot and killed nine black members of the church.  This put Mother Emanuel in the national spotlight, and overnight made this church a destination for mourners and pilgrims.

Charleston is home to no fewer than a dozen other historic churches, both inside and outside of the historic district.  Some of the best of these are, unfortunately, not within a short walking distance.  At the north end of the city just off King Street is the Greek Orthodox Church of the Holy Trinity (28 Race Street).  Beyond that, on the campus of The Citadel, is the Summerall Chapel, one of the finest collegiate chapels to be found in South Carolina.

Strangely, the oldest church in South Carolina, while in Charleston, is not part of the historic city center or even on the Peninsula.  Old St. Andrew’s Parish Church is located on the far side of the Ashley River, about a twenty minute drive from the historic district.    Built in the early 18th century, it has stood in its current form more or less unchanged since 1723.