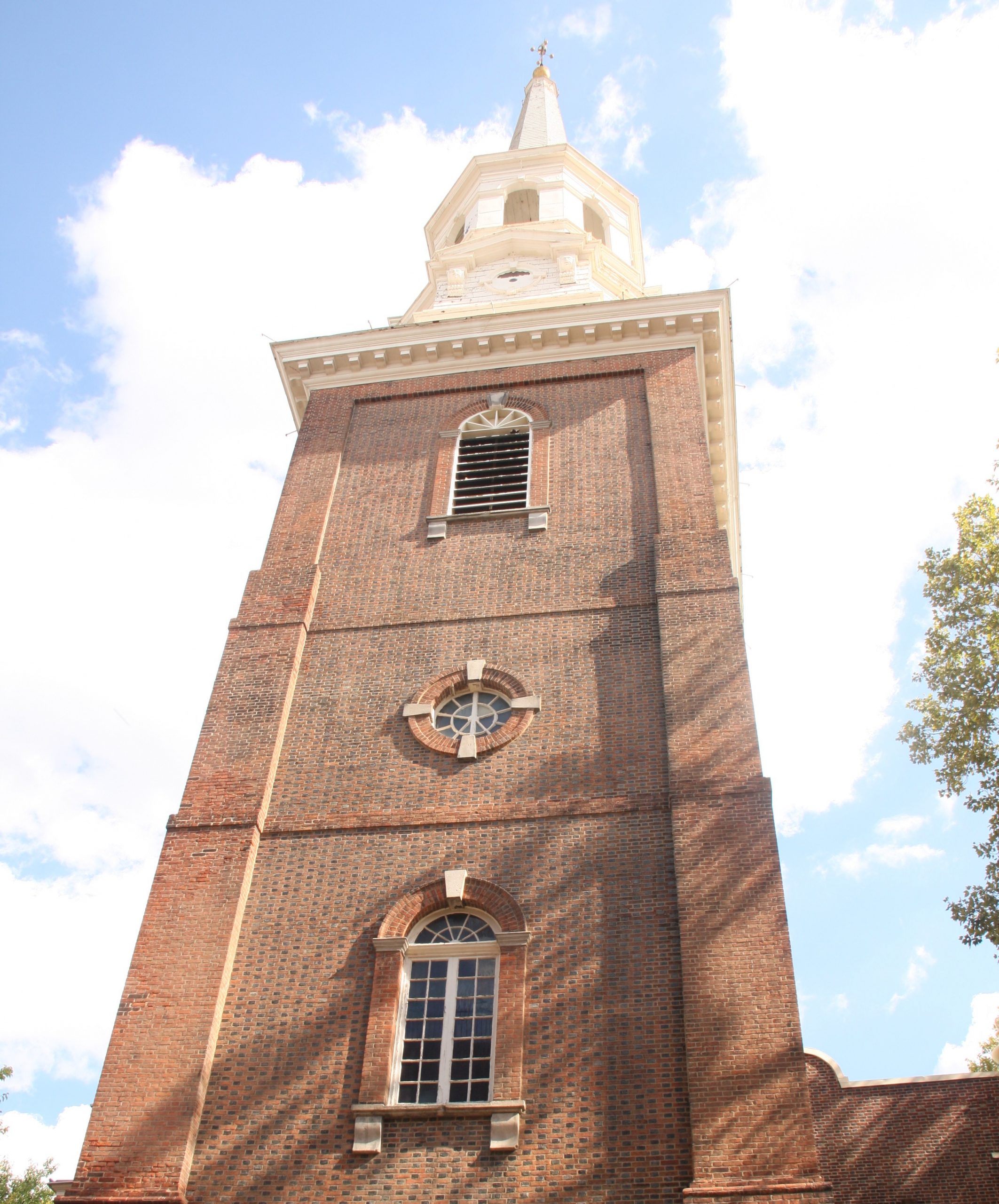 Philadelphia is one of America’s oldest and most historic cities.  It has a long history of religious tolerance, and many religious groups and denominations in the United States got their start right here in the City of Brotherly Love.  Not surprisingly, Philadelphia is packed with an amazing selection of historic religious sites, with many clustered in and around the old city center.  A number of the best can be easily seen in a few hours on foot.  Intrepid walkers can find a wealth of other worthwhile churches in the surrounding neighborhoods as well.

Arguably the best place to start any tour of Philadelphia’s churches is Christ Church (22 North American Street).  This church, with a parish dating to the 17th century, was closely associated with the Founding Fathers thanks to its proximity to Independence Hall.  Originally part of the Church of England, it was here that the American Episcopal Church was founded in 1789.

A few blocks to the west is the Kahal Kadosh Mikveh Israel Synagogue (44 North 4th Street).  This congregation, founded in the 18th century, had many members who served the American cause during the Revolution.  Of most interest here is the cemetery, where a number of Jewish patriots are buried including Haym Solomon.

Just across the street from St. Augustine is St. George’s United Methodist Church (235 North 4th Street).  Completed in 1763, St. George’s is home to the oldest continually active Methodist congregation in the United States.  The first African ministers in American history were ordained here despite the fact that the congregation was segregated.

Another cluster of historic churches can be found south of the old city center, also largely along and near 4th Street.  The first two are Old St. Joseph’s Church (321 Willings Alley) and Old St. Mary’s Church (252 South 4th Street).  These two Catholic churches, which were completed in the mid-18th century, are among the oldest still in use in the United States.  A few blocks further south is the Society Hill Synagogue (418 Spruce Street), a converted19th century Baptist church now used for Jewish worship.

Once at Pine Street, walkers can visit several other churches.  The Old Pine Street Presbyterian Church (412 Pine Street) dates from 1768 and was attended by several Founding Fathers, including John Adams.  St. Peter’s Episcopal Church (313 Pine Street) was completed in 1758 and was created to accommodate the overflow from Christ Church, whose congregation had grown too big.

Rounding out the major churches in this neighborhood is the Mother Bethel African Methodist Episcopal Church (419 6th Street).  Established by Richard Allen, it split off from St. George’s in 1794 due to the aforementioned segregation issues.  A founding member of the African Methodist Episcopal Church, Mother Bethel is home to one of the oldest African American congregations in the United States.

A little further out is the Gloria Dei Church (916 South Swanson Street). Also known as Old Swedes Church, Gloria Dei is located close to the Delaware River, approximately twenty blocks south and east of Mother Bethel.  Originally a Lutheran church completed in 1700, it is the oldest house of worship in Philadelphia.  It is currently active as an Episcopal church.

Scattered north and west of the historic district are literally dozens of other churches, cathedrals and synagogues that could be included in any good tour of Philadelphia’s religious sites.  A lot of these buildings, especially those close to city hall, date from the 19th century.  There are two outliers in particular worth mentioning.

The Cathedral Basilica of Saints Peter and Paul (1723 Race Street), which towers over Logan Square, was completed in 1864 and is the largest church in the city.  It is currently seat of the Roman Catholic Archdiocese of Philadelphia.  On the north side of the city is the National Shrine of St. John Neumann (1019 North 5th Street).  Neumann, one of only a handful of Americans ever to be canonized as a saint in the Roman Catholic Church, is entombed here under glass.