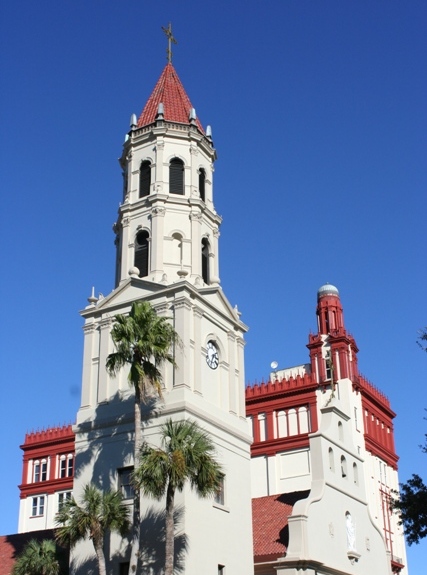 The city of St. Augustine in Florida was the site of the first permanent European settlement in what is now the United States.  Founded in 1565, it predates the earliest settlements of the English and Dutch in America by almost half a century.  Not surprisingly, St. Augustine is home to some very old and very historic churches.  From America’s first Catholic parish in the 16th century to one of the great Protestant masterpieces of the industrial era in the 19th century, St. Augustine boasts a wealth of religious architecture.  And the best part is that most of these are located along an easily walkable circuit of less than three miles.

Perhaps the best place to start any walking tour of St. Augustine’s churches would be the Cathedral Basilica of St. Augustine (38 Cathedral Place).  Home to the oldest Catholic parish in the United States, several earlier churches stood on the site before the current cathedral was completed in 1797.  The building was declared a minor basilica by the Roman Catholic Church in 1976.

Just opposite the cathedral across the Plaza de la Constitution is Trinity Parish Church (215 St. George Street), the oldest non-Catholic church building in Florida.  An Episcopal institution founded shortly after Florida became an American territory, the church was completed in 1834.  Two blocks further south from Trinity Parish is the stately Motherhouse of the Sisters of St. Joseph (241 St. George Street), a convent established here just after the American Civil War.

But the most historic and famous church in the neighborhood is St. Benedict the Moor Church (86 Martin Luther King Avenue).  This Catholic Church is closely associated with the St. Benedict the Moor Mission and School, which were established with the assistance of Katherine Drexel in the late 19th century.  The church, completed in 1911, is still in operation.

A seven block walk north on Martin Luther King Avenue and Markland Place goes past the First United Methodist Church (118 King Street) before arriving at one of Florida’s greatest architectural treasures, Memorial Presbyterian Church (32 Sevilla Street).  Memorial Presbyterian is, simply put, stunning.  Constructed by oil tycoon Henry Flagler in the late 19th century, this church was one of the most expensive Protestant buildings of its day.  It is routinely ranked as one of the most beautiful churches in the United States.

A block north is the Ancient City Baptist Church (27 Sevilla Street).  Another late 19th century church, this one was constructed on land donated by the aforementioned Henry Flagler.  A block to the east is yet another building donated by Flagler, Grace United Methodist Church (8 Carrera Street).  All of these churches were meant to serve the guests of Flagler’s spectacular resort, the Ponce de Leon Hotel, which is now part of Flagler College.

A few minutes walk to the east brings visitors back to St. George Street a few blocks north of the Cathedral Basilica of St. Augustine, and one final religious site: the St. Photios Greek Orthodox National Shrine (41 St. George Street).  Located in an 18th century house which had been used by one of the first Greek communities in the United States, the building was acquired and repurposed as an Orthodox shrine in the 1960s.