Much has been said about the theological roots of the United States and the extent to which the Founding Fathers were truly religious men.  Whatever the truth about their religious convictions, there is no doubt that most of the Founding Fathers were, in fact, churchgoers throughout their lives.  George Washington, John Adams, Alexander Hamilton and even the unorthodox Benjamin Franklin could be found filling the pews of churches from Boston to Mount Vernon.  Many of these churches have since gone on to become national historic treasures. 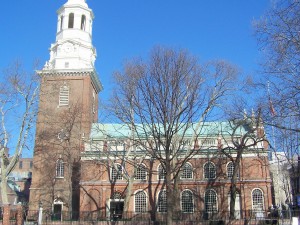 Christ Church in Philadelphia was, in many ways, the defacto church of the Founding Fathers.  Periodically attended by Quaker-turned-Deist Benjamin Franklin, it was also frequented by members of the Continental Congress as well as George Washington when he served as president.  Christ Church was founded as an Anglican Parish in 1695.  Throughout the 18th century, when Philadelphia was one of the most important cities in the American colonies, Christ Church was one of the most prominent congregations.

The current church was constructed in 1754.  At the time it was the largest church building in the colonies.  Its members were closely tied to the activities of the Continental Congress, including the church rector, who served as the congressional chaplain.  After the American Revolution, Christ Church was the site of the convention where the Episcopal Church broke away from the Church of England.  Benjamin Franklin and other Founding Fathers are buried in the nearby church yard. 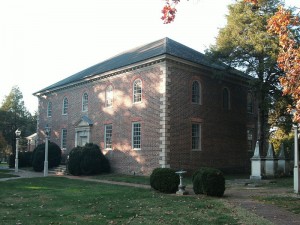 Pohick Church in Northern Virginia is the church most closely associated with George Washington, the first president of the United States.  Originally known as Occoquan Church, it was founded as an Anglican parish in 1695 and was attended by several generations of the Washington family.  George Washington was an active member and leader of the parish in his younger years.  Another Founding Father, George Mason, was also a regular attendant of the church in the 18th century.

In 1769, a new structure was built, funded in part by money raised by Washington.  Unfortunately Pohick fell into a state of extreme disrepair by the late 19th century.  This was due in part to the separation from the Anglican Church after the American Revolution, and even more so by rough treatment by British troops during the War of 1812 and by Federal troops during the American Civil War.  It has since been restored, and is currently in active use as an Episcopal Church. 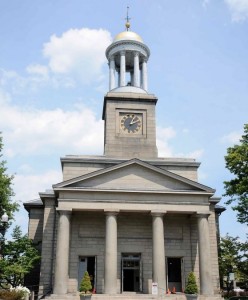 United First Parish Church outside of Boston has been nicknamed the Church of the Presidents because not only did the Adams family attend it for generations, numerous members of the family are interred there, including two presidents.  The congregation, one of the oldest in the United States, was founded in 1636 by Puritan settlers.  The original church was constructed in 1639.  Interestingly, since the mid-18th century, United has served as a Unitarian institution.

Both John Adams and John Quincy Adams, the second and sixth presidents of the United States respectively, attended church here, as did famed First Lady Abigail Adams.  A new church building was constructed in 1828, funded in part by the Adams family.  The family is honored with the pew in which they sat and which is memorialized with a marker.  The crypt where the two presidents and their wives are buried is located beneath the church. 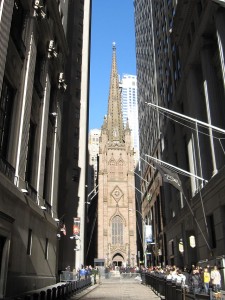 Trinity Church in New York City is one of the oldest buildings on the island of Manhattan, and is famously associated with Alexander Hamilton, Founding Father and first Secretary of the Treasury (appropriate considering its proximity to Wall Street).  Trinity Church was the first Anglican church established in Manhattan after the territory was acquired from the Dutch.  The first church building was destroyed in the Great Fire of 1776, just months after the signing of the Declaration of Independence.  It was later replaced by a second and third building.

Alexander Hamilton attended church here most of his life, notably from the time of his return to New York after his government service until his death at the hands of political rival Aaron Burr in a duel.  Trinity Church was also attended for a time by John Jay, the first Chief Justice of the United States Supreme Court.  Trinity became part of the Episcopal communion after the break with the Anglicans.  The third church, which is still standing and still in use, was completed in 1846.  Hamilton is buried in the original graveyard immediately adjacent to the church. 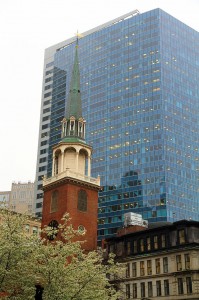 The Old South Meeting House was the most important church in Boston at the time of the American Revolution.  Although perhaps less famous than the nearby Old North Church, which played such a pivotal role in the Battle of Lexington and Concord, Old South was a much larger building and a common rallying point for dissidents against British rule.  Built in 1729, it was a breakaway from the First Church of Boston, the oldest Christian church in the city, and was one of the last major Puritan churches to be established.

Attended by Samuel Adams and frequented by members of the Sons of Liberty, its most famous moment in history came on December 16, 1773.  On that night, thousands of Bostonians gathered at the church, marched on the harbor and celebrated the Boston Tea Party.  During the late 19th century, the congregation constructed a new church, but preserved the original building as a museum.  An honorary service is held here once a year on the Sunday before every Thanksgiving.