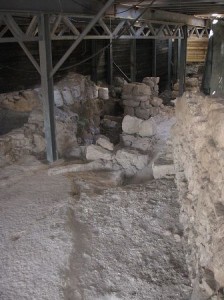 The city of Jerusalem is the most sacred place in Judaism.  It is impossible to overstate the religious importance of the place where the Great Temple of Israel once stood.  So great does Jerusalem loom in the memories of all of the descendents of Abraham that its sanctity extends deep into the Christian and Muslim faiths as well.  But it was first and foremost the city of the Israelites, the capital of the united kingdom of Israel and later of Judah, and the location of Solomon’s Temple, the place where God himself resided among the people, and where he will return at the end of days.  Little now remains of that ancient time, but there are a few architectural bits here and there that recall the days of ancient Judah’s glory.  The Old City of Jerusalem is a prospective UNESCO World Heritage Site.

Around the year 1003 BC, the Israelite army under King David conquered the last remaining enclave of Canaanites in central Israel, the Jebusite fortress of Zion.  Because of its location, which was both fairly central to all of the tribal lands and yet solidly within Judah’s borders, David made it his royal capital.  Although the greater city of Jerusalem expanded significantly in later decades, the City of David proper remained Israel’s and later Judea’s royal enclave for the next four centuries.  It was here that Judah’s kings maintained their primary residence right up until the days of the Babylonian conquest.

The City of David is closely tied geographically to the Kidron Valley which dominates the eastern side of Jerusalem between Mount Zion to the south and the Mount of Olives to the north.  The Gihon Spring, the primary source of water for Jerusalem in ancient times, is located here, and according to tradition it was through this underground water system that David and his men conquered the Jebusite fortress.  Later, King Hezekiah constructed the famous escape tunnel which connected the Pool of Siloam in the City of David to the Spring of Gihon and other points.  The existence of this tunnel supports the theory that Judah’s kings remained in residence in the City of David throughout their entire tenure.

In 587 BC, the Babylonians sacked Jerusalem.  The city of David, with its rich palaces and tombs, was a natural target for the conquerors.  According to tradition, most of Judah’s kings had been buried upon Mount Zion.  By the time the Babylonians were done ransacking the place, virtually nothing remained.  Anything that might have survived was destroyed by subsequent waves of conquerors.  To date, only the Tombs of Jehosaphat and Zedekiah, the 4th and 20th kings of Judah, have been identified with any amount of certitude, and these are actually located in the Kidron Valley.

Sometime in the Hasmonean or Roman period, a shrine or synagogue was built on Mount Zion.  Later, possibly during the Byzantine era of holy shrine construction in the 4th century AD, this site became identified as the Tomb of David, as well as the site of several events important in Christian history.  A new church went up, and the place has been considered sacred ever since.  Although archaeological and theological studies of the shrine have concluded that the likelihood of David being buried within is next to zero, it has not slowed the steady stream of pilgrims who come to visit and pray at the site.

The Tomb of David is located on Mount Zion not too far south of Jerusalem’s Zion gate.  It technically lies outside of where the walls of the main city stood in ancient times.  The site of the tomb was actually incorporated into the Abbey of the Dormition at the beginning of the 20th century.  The abbey, financed by Kaiser Wilhelm II and completed in 1910, supposedly stands on the site where Mary the mother of Jesus ascended to heaven.  According to Islamic tradition, the Nabi Daoud, where David was buried, is located inside the abbey.  However, Jewish tradition puts the tomb in an ancient structure next door to the abbey.

The building where the tomb is located is a mix of Crusader, Arab and Ottoman architectural styles.  Recent excavations have revealed that earlier buildings stood on the site since at least as far back as the Roman occupation of the city during the Second Temple period.  Unfortunately, evidence of construction earlier than that has yet to be identified.  The sarcaphogas in the tomb is a relatively simple affair draped in black and gold cloth and topped with precious vessels, scrolls and artifacts.

The Tomb of David is close to many of Jerusalem’s other historic sites and is easily reached on foot or by public transportation.  It is open daily at 8:00 am (closing hours vary).  There is no cost of admission.  Web: www.goisrael.com (official tourism website of Israel)

While the legitimacity of the Tomb of David is questionable, the City of David, Mount Zion and the Kidron Valley are home to a number of more authentic sites related to the ancient kingdom.  Among these are several royal burial sites, including the Tomb of Jehosaphat and the Tomb of Zedekiah.  Absolom’s Pillar marks the site where Absolom the son of David is buried.  Hezekiah’s Tunnel was rediscovered in the early 19th century and is almost completely intact.  Its entire length can once again be explored.  The Gihon Spring still provides water to the area, and while the Pool of Siloam is now dry, it remains in otherwise excellent archaeological condition.  There is also a small portion of the old Jebusite Wall in the City of David which dates from the period of the Judges.