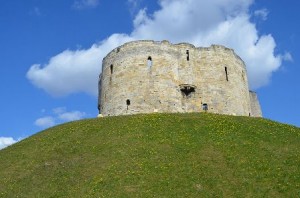 The history of the Jews in England in the Middle Ages was a short and tumultuous one.  Arriving with the Normans in 1066 AD, they were expelled barely two centuries later.  Despite the relatively tolerant climate the Jews of England enjoyed during this brief period, one of the most infamous pogroms in Western European history took place in the city of York.  This sad event recalled the terrifying end to the Roman siege of the fortress of Masada twelve centuries earlier.  When it was clear that neither the tower nor the local authorities could protect them from the angry mob outside, the Jews of York turned to mass suicide.  In the years since, Clifford’s Tower has come to represent the horrors of religious persecution as well as reconciliation and peaceful coexistence, and is probably the most popular Jewish pilgrimage site in England.

Although Jews were not unknown to the British Isles during the Roman and Saxon periods, there is no documented evidence of sizeable Jewish communities during the early Middle Ages.  According to some historical sources, the first large numbers of Jews arrived in England along with the armies of William the Conqueror in the 11th century AD.  William’s interest in the Jews was primarily economic.  Jewish trading and money-lending networks were already well established in his territories in northern France, and William was desirous of putting the Jews’ expertise and money to use in his new domains in Britain.

The first century of the Jews’ residence in England was not only one of tolerance, but in many ways of preferential treatment.  From a strictly technically standpoint, the Jews were treated as royal property, perhaps just a step above slave status.  From a pragmatic standpoint, this meant that the Jews could move freely throughout England and keep their own religious practices without interference from the Church.  Most importantly, it meant that they enjoyed the protection of the crown.  Because of this, many Jews from throughout Western Europe began relocating to England.  This golden age did not last long.  Despite good relations with the Norman kings, and in many places even with the Roman Catholic leaders, the special privileges and accumulated wealth stirred up jealousy and greed amongst the English peasantry.

Throughout the second half of the 12th century, persecutions and pogroms increased in both frequency and violence.  These took on a fevered pitch in the years 1189 and 1190 as Richard the Lionheart whipped the country into a religious fervor in preparation for the Third Crusade.  Riots and killings began on a large scale in London in 1189, but it would be the next year in York where persecutions reached their peak.  On March 16, 1190, the Jews of the city, fearful of an anti-Jewish mob gathering, took refuge in York Castle under the protection of the local sherrif.  Unfortunately, despite the genuine efforts of the sherrif and his soldiers to keep the mob at bay, they were clearly overmatched and were forced to abandon the Jews to their fate.

The mob laid siege to the tower.  Inside were about 150 Jews under the leadership of the rabbi Yomtov.  Realizing that there was no way to keep the mob out, and fearful of the impending mass torture, rape and slaughter of his charges, he led the trapped Jews in a ritual of mass suicide.  A handful refused, deciding to accept the mob’s offer to convert to Christianity, but these were betrayed and also slain.  None survived the massacre.  After this event the existence of the Jews in England steadily worsened, until all were driven out of the country in 1290.  Seven hundred years later, in 1980, a ceremony was held in which the Jews of York formally forgave the incident, reconciling the Jewish and Christian communities.

The current incarnation of Clifford’s Tower is not the same as the York Castle of the time of the massacre.  The original fortress was a wooden motte-and-bailey castle that was constructed during William’s reign.  It was actually destroyed in a fire that started on the day of the massacre.  Some accounts point to the Jews, who accidentally set the building ablaze when they destroyed their treasure to keep it out of the hands of the mob.  Others point to the mob, who may have set the castle on fire when the treasure of the Jews was denied to them.

York Castle has been rebuilt several times, with the current structure dating mostly from the 13th and 17th centuries.  According to a local tradition, the site of the castle is cursed because of the terrible events that occurred there.  Shortly after its reconstruction in 1245, it is said that the walls turned red as if running with the blood of its victims.  This has occurred several times in the tower’s history, and the phenomenon has never been successfully explained.  The walls still bear a slightly pinkish tint, which locals regard as an eternal reminder of the guilt of their forefathers.

Clifford’s Tower is located on a hill on the south side of the city of York close to the Foss River, approximately a hundred and seventy miles north of London.  It is open April through September from 10:00am-6:00pm; October from 10:00am-5:00pm; and November through March from 10:00am-4:00pm except on Christmas and New Year.  The coast of admission is L2.90 for adults, L1.50 for children.  Web: www.yorkcastlemuseum.org.uk (official website)

There is an unconfirmed story that one Jewish family was not at the tower at the time of the massacre.  Instead this family fled to the Church of St. Mary’s in Castlegate, where they were eventually caught and butchered.