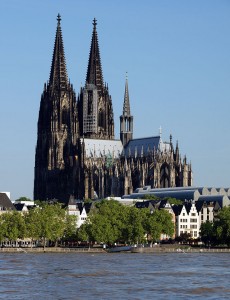 Cologne Cathedral was one of the architectural wonders of the Middle Ages.  From the time of its completion it was the largest church, and building, in the world, until it was surpassed by St. Peter’s Basilica in Rome.  When it was finally completed in the 19th century, more than six-hundred years after construction began, it was also the tallest man-made structure in the world.  But for all of Cologne Cathedral’s mind-boggling dimensions, it is not for its size that it is best known, but rather for what is within: the Shrine of the Three Kings, one of the oldest and most popular pilgrimage places in Northern Europe.  The shrine, whose centerpiece is believed to be the world’s largest golden reliquary, supposedly contains the relics of the Three Wise Men who visited the infant Jesus at the time of his birth.  The cathedral still draws millions of tourists and pilgrims every year, and is the most popular Catholic holy site in Germany.  Cologne Cathedral is a UNESCO World Heritage Site.

The history of Cologne Cathedral begins in the 1st century BC with the Biblical story of the Three Wise Men.  This trio, who visited the infant Jesus in the days after his birth, are among the most enigmatic figures in the New Testament.  An indelible part of the Nativity Story, virtually nothing is known about them, either of their identity or their homeland.  Even the traditional names of the Three Wise Men, Caspar, Melchior and Balthasar, are based on later writings, and not the Bible.  It is thus with considerable skepticism that modern scholars and theologians view the three bodies identified as those of the Magi by Queen Helena in the 4th century.

This did not seem to stop hordes of early Christians from embracing the relics.  Helena, who ‘discovered’ them during her tour of the Holy Land, had them removed to the Hagia Sofia in Istanbul, where they remained for centuries before being relocated to Milan.  Eventually they came into the possession of the Holy Roman Emperor Frederick I, who absconded with them as booty while fighting to expand imperial territory into Italy.  They were given in turn to the Archbishop of Cologne, a favorite courtier of the emperor and an influential leader of the medieval Church.  The relics of the Magi became an overnight success in Germany and a magnet for Christian tourists from all over the empire. 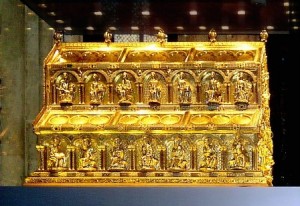 In 1248 AD, Cologne’s Old Cathedral, which had been constructed four centuries earlier by the descendents of Charlemagne, was destroyed in a fire.  It was decided by the archbishop and the emperor that a new cathedral would be constructed on a massive and grandiose scale befitting the relics of the Three Wise Men.  So eager were they to get started on the new shrine that construction began a mere four months later.  The new cathedral would be one of the largest building projects undertaken in the Middle Ages, and it was not completed for the better part of six centuries.

Despite the seemingly endless construction work, the Shrine of the Three Kings was up and running fairly early, and was the most popular Catholic shrine in Germany in the Middle Ages.  It is probable that the Cologne Cathedral was the most visited Christian pilgrimage destination in Northern Europe prior to the Protestant Reformation.  During World War II the cathedral was badly damaged by Allied bombing.  Fortunately repairs took only a decade, less than one-sixtieth of the time it took to build the cathedral.  Cologne Cathedral is once again one of the architectural wonders of Germany, a great landmark overlooking the Rhine River and a must-see for visitors to Cologne.

The behometh that is Cologne Cathedral is a Gothic masterpiece akin to those constructed in Northern France in the Middle Ages.  Among the more notable French-style architectural touches are the flying buttresses used to support the cathedral’s massive height and bulk.  Most of the construction dates from the 13th, 14th and 15th centuries, though detail and repair work continued well into the 1800s.  The dominant external feature of the cathedral, aside from the buttresses, are the skyscraping twin spires which have dominated the city skyline of Cologne since the 19th century, and which for a few brief years made Cologne Cathedral the tallest man-made structure in the world.

The dimensions of the interior of the cathedral are no less impressive, boasting one of the tallest vaults of any church in the world.  The interior is perhaps a bit plainer than other medieval Gothic period constructions, but most visitors look past this in their rush to get to the cathedral’s highlight: the Shrine of the Three Kings.  This giant, golden tomb built for three is the largest Christian reliquary in the world.  It has been suggested that the size and splendor of both the cathedral and tomb were designed to awe and distract visiting pilgrims from the fact that, for all its popularity, the legitimacy of the tomb’s contents are questionable at best.

The massive bulk of Cologne Cathedral dominates the north side of Cologne’s city center.  It is easily reached on foot from the city’s other major tourism sites, and is a quick jaunt from the train station for those in a real rush.  The cathedral is open every day from 6:00am-7:30pm.  Admission is E4.00.  Web: www.koelner-dom.de (official website)

Cologne was one of the first cities in Germany to see the arrival of Christianity, and is home to several very old churches.  The most famous and popular of these is probably St. Gereon’s Church, which dates in part to Roman times.