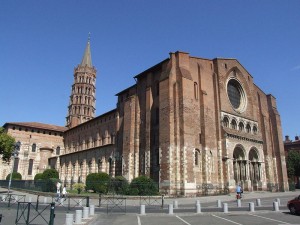 Few cities in Western Europe boast a religious history as tumultuous as that of Toulouse in Southern France.  As home to a long succession of heretical movements, Toulouse experienced more inter-Christian religious strife than almost any other city in Europe prior to the Protestant Reformation.  However, the destruction that the city regularly incurred through history has been offset by more than two centuries of nearly undisturbed peace since the French Revolution.  Toulouse is now one of France’s best preserved Renaissance cities because of this.  One of its great surviving edifices of the Middle Ages is the Jacobin Monastery, which for centuries served as one of the Church’s great theological centers.  The tomb of Thomas Aquinas is within and is highly revered by Christian theologians and scholars.

Toulouse has historically been one of Christianity’s great theological battlegrounds.  It has seen religious turmoil almost since Christianity became the official faith of the Roman Empire.  When the Visigothic tribes began arriving in Southern France in the 4th century, they had already adopted the Arian form of Christianity.  As they spread out through Western Europe, Arianism spread with them, much to the consternation of Catholic leaders in Rome.  It established a particularly strong foothold in Toulouse, the Visigothic capital.  At the urging of the Papacy, the Catholic Franks conquered most of the Visigothic kingdom in 507 AD, and by the middle of the 6th century most of the Arians were converted.

Two-hundred years later, Toulouse marked the furthest point of advance of the Islamic Empire into Western Europe.  After conquering the Byzantine possessions in North Africa and the remaining Visigothic lands in Iberia, the Muslim advance into France seemed unstoppable.  But Toulouse became the military and religious rallying point of Christendom, and in 721 the city withstood a siege by superior Muslim forces.  The ensuing Battle of Toulouse was a major victory for the Christians, and set the stage for France’s future as the chief European state advocating for the Crusades in later years.

Toulouse became a reliable Catholic stronghold after that, but it never seemed to forget its antiestablishment roots.  Southern France seemed to be a hotbed of future heretical movements. During the 12th century two major sects in France attempted to split off from the Catholic Church: the Waldensians, and the Albigensians.  This was particularly true of the Albigensians who used Toulouse as their chief headquarters and final stronghold.  This led to the first crusade in continental Europe in 1216 AD.  Concerned about future heretical uprisings, the Papacy established an Inquisition in Toulouse.  This Inquisition, which predated more famous ones in Spain and elsewhere, was the first to use torture and questionable methods in the exaction of confessions.

The Inquisition of Toulouse lasted for four centuries, and to emphasize the importance of Catholicism and the ‘correct’ practice of Christianity, the Church had the body of Thomas Aquinas, one of its foremost theologians of all time, brought here and interred in the Jacobins Monastery.  During the Protestant Reformation, Toulouse again found itself in the spotlight.  As Calvinist missionaries penetrated Southern France from Switzerland, many citizens of Toulouse heartily embraced Protestantism, and in 1562 rioting between the Catholics and Protestants ensued.  This was one of the key events that led to the French Wars of Religion that ultimately ended in the brutal defeat of the Huguenots.  But for all of its colorful history, Toulouse now goes on about its religious business quietly.  Only the relic of Thomas Aquinas now survives as a distant reminder of the city’s turbulent Christian history.

The Convent of the Jacobins is a Romanesque masterpiece with an architectural uniqueness befitting Toulouse’s controversial history.  Built in the 11th and 12th centuries, the Basilica hardly resembles anything else built in the same period, and many of its artistic touches seem to anticipate future designs.  The single carillon bell-tower is located at the crossing point of the basilica, rather than near the entrance.  The bell-tower also bears more of a resemblance to an oriental pagoda than the twin square towers commonly used in France at the time.

The Convent of the Jacobins features the cells, choir and refectory of a typical monastery as well as a superb cloister garden.  The religious highlight of the convent is the Tomb of Thomas Aquinas, one of the greatest theologians in the history of the Roman Catholic Church.  However, the body was, in fact, divided up at the time of the French Revolution.  The portion that was left in Toulouse was burned, and what is now buried here are his cremated remains.

The Convent of the Jacobins is located close to the city center of Toulouse approximately five-hundred miles south of the city of Paris.  It is open daily from 10:00am-7:00pm.  The cost of admission is E5.00.  Web: www.jacobins.mairie-toulouse.fr (official website)

The diversity and architectural unusualness of Toulouse’s churches reflect its long controversial history.  The Basilica of St. Sernins, an artistically unique Romanesque church, was built in the 12th century to house relics.  Other major churches include the Cathedral of St. Etienne, a mishmash of architecture spanning centuries, the Eglise Notre Dame du Taur, the original resting place of St. Sernin, and the Daurade Basilica, portions of which date back to Roman times when it was used as a pagan temple.