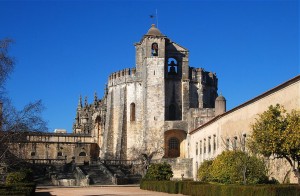 When the Templars arrived in Western Iberia in 1160 AD, they built a string of fortresses to help secure their territories from the Moors.  The greatest of these, the Convento de Christo, is the finest surviving medieval castle in Portugal and one of the finest surviving Templar fortresses anywhere.  After their dissolution, most of what survived of the Templars found its way to the Convento de Christo, their last major safe haven in Europe.  Later, the Convento de Christo played a small but important part at the dawn of the Age of Exploration.  This ancient fortress, little changed since its initial construction more than 850 years ago, is now home to a community of monks.  It is also one of Portugal’s most important historic and most visited religious sites.

After the Christian reconquest of Jerusalem during the First Crusade in the 11th century, the remnants of the ancient Visigothic kingdom in Iberia began to pursue in earnest their own efforts to drive the Moors out of Spain.  With the aid of volunteer crusaders from other parts of Europe, the Christians of Iberia began to drive back the highly fractured Muslim forces.  The Order of the Knights Templar was among those enlisted in the campaign, and these highly experienced warrior-monks played a pivotal role in the Reconquista.  For their efforts they were rewarded richly with lands and castles, particularly in the west.  In Tomar they constructed an enormous, heavily fortified castle & convent, which in 1160 AD became their headquarters in Portugal and Spain.

Throughout the late 12th and early 13th centuries the stronghold of the Templars in Tomar became a major factor in the wars between the Christian north and Muslim south.  After the Moors recovered from the initial shock of the Reconquista, they launched a counteroffensive that was finally halted before the walls of Tomar in 1190.  By 1236 virtually all of Iberia was back in Christian hands.  The Templar fortress in Tomar was by now one of their greatest citadels and headquarters.  Unfortunately, the Templar Order was crushed in 1312 following an edict of the Church condemning them as heretics.

While most of the Templars in Europe were cruelly put to death during the ensuing purge, the Templars of Portugal survived under the protection of the crown.  Many surviving Templers from Spain and France fled here.  In order to avoid the wrath of Church officials, the Templars were reformed as the Order of Christ.  Because of their debt to King Dinis, who aided them during the purge, the Knights of Christ became loyal supporters of the Portuguese crown and were crucial to the beginnings of Portugal’s overseas empire.  Their fortress in Tomar, renamed the Convent of Christ, was retained as their headquarters.

During the 15th century, the Order of Christ took on a new mandate, to lead the first wave of European exploration into new lands.  Under the leadership of the order’s Grand Master, Prince Henry the Navigator, the Knights of Christ set sail for Africa, to establish trading posts and serve as Christian missionaries.  In a major historical moment, the Act of Iberian Union, which joined Spain and Portugal under a single monarchy, took place at the Convent.  During the 1550s, the Knights of Christ were largely disbanded in Portugal, and their convent turned over to a related but non-militant monastic order.  The great fortress continues to serve as a monastery.

The Convento De Christo is a fortified monastery, which differs somewhat from the purpose of a typical castle.  It is designed around a chapel, rather than having a chapel as an add-on piece.  The convent is built along typical Templar lines, on a dominating hilltop guarded by a long towered wall.  During its early history, the outer walls enclosed not only the castle and convent but also a small town.  The main monastery building is similar to, albeit much larger than, similar Templar strongholds, being loosely modeled after the Temple of Solomon in Jerusalem.

The original building of the convent consisted of a round Templar worship hall.  This is typical of Templar architecture, who worshiped in a circular rather than in a ministerial/congregational setting.  The rotunda is lit by round windows and decorated with paintings and murals featuring biblical scenes.  The Templar Church was renovated several times during the 15th century in order to expand the structure.  A century after the purge, Henry the Navigator added a nave to the church in order to make its use as a Christian sanctuary more standard.  He also added a Chapter House and Sacristy.  The former is connected to the Church via the nave, while the latter is tucked away in a corner of the main rotunda.  Outside the main convent building is a series of cloister, which also date from around this time.

The Convento De Christo is located in the Old Town of Tomar, approximately 75 miles northeast of Lisbon.  It is open to the public daily.  From June to September the castle is open from 9:00am to 6:00pm; and from October to May from 9:15am to 5:00pm.  Admission is E3.00 for adults and E1.50 for children.  Children 14 and under are free.    Web: http://tomar2.com.sapo.pt (official website)

The Templars left a considerable legacy of fortresses behind in Portugal.  The most important and impressive of these is Almourol Castle in Barquinha.  Portugal’s other great surviving medieval fortress is Guimaraes Castle.  Guimaraes, sometimes known as the Cradle of Portugal, was built early during the Reconquista period and was the first royal residence of the Portuguese monarchy.