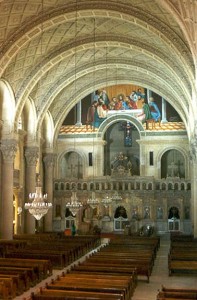 For almost two thousand years, Alexandria has been home to one of Christianity’s five great Patriarchal seats.  It was once considered, and still is by the Coptic Orthodox Church, the Papal See of Africa, and according to tradition the Patriarch is still technically the senior bishop of that continent.  However, that tradition is obscured by the fact that there are three different Patriarchs of Africa: Coptic Orthodox, Eastern Orthodox and Roman Catholic.  While most of ancient Alexandria is long gone, some of the early Christian churches and monuments still survive, including several ancient buildings and churches of the African Patriarchal See.  The highlight of the complex is the Church of the Patriarch, in which are entombed nearly fifty ancient patriarchs, bishops and saints.

Alexandria spent almost a millennium in history’s spotlight as one of the greatest cities in the Mediterranean world.  Founded by Alexander the Great in the 4th century BC, it became the capital of Egypt, then a territorial capital of Rome, and finally one of the five great centers of the early Church.  Christianity was first introduced to Alexandria and Egypt by Mark the Evangelist, and many early Christians moved there to avoid persecution in Judea.  One of Alexandria’s most famous early martyrs was Catherine, immortalized by the monastery in the Sinai which is named for her.  During the Great Revolt, Christians began fleeing in great numbers to Alexandria, swelling the city’s Christian population.  As the worldwide church grew more organized, the city’s Bishop was promoted to Patriarch of Egypt and Eastern Africa.

The Patriarchate of Alexandria played an important and often tumultuous role in the early history of Christianity.  Alexandria was a major theological and philosophical battleground between Orthodox Christians and the numerous heretical movements that were constantly springing up in the Eastern Empire and North Africa, and the city’s patriarchs were often involved in settling exceptional doctrinal disputes.  During the 3rd century CE, the Patriarchs of Alexandria slowly began distancing themselves from Rome, as they did not fully agree with the primacy of that city’s bishop.

Christian Alexandria reached its pinnacle in the 4th century.  Following the legalization of Christianity, the Patriarchate of Alexandria went from being a purely religious institution to being a major political power in East Africa.  Soon afterwards, Athanasius, one of the most influential and controversial Patriarchs in Egypt’s history, led the charge to firmly establish the Christian orthodoxy in the east and stamp out all heretical movements and vestiges of pagan worship.  From his time until the coming of Islam, Alexandria remained a bulwark against heresy in the Church.  As the Roman Empire began to wind down, Alexandria fell into decline.  But Christianity continued to flourish, and as it did, Alexandria’s importance as a religious center grew stronger.  However, in 451 AD, the Patriarchate of Alexandria broke away from the rest of the Church owing to doctrinal differences arriving from the Council of Chalcedon.  This eventually led to a schism between the Coptic Orthodox Church of Alexandria and the Eastern Orthodox Church of Alexandria.

Christianity in Egypt was eclipsed in the 7th century when Muslim armies overran North Africa.  Contact with Rome and Constantinople was largely severed at this time, leaving what was left of the Christians of Alexandria to their own devices.  Despite the Islamic conquest, however, and Alexandria’s subsequent relegation to the status of a small provincial city, the twin Patriarchates continued to survive in a nearly unbroken chain from the time of Mark the Evangelist.  Today, the Patriarchate of Alexandria continues to exist, but remains in the same difficult, tenuous shape of its three eastern counterparts in Istanbul, Antioch and Jerusalem.

Virtually nothing remains today of ancient Alexandria, whether of Egyptian, Greek, Roman, Christian or even Islamic origin.  Most of the city, which had fallen into considerable disrepair, was rebuilt during the 19th and 20th centuries.  The complex of the Patriarchate of Alexandria remains one of the city’s most venerable institutions.  The oldest and most important building is the Church of the Patriarchate, which has stood on this spot since the 1st century.  Frequently renovated, the current structure was substantially rebuilt in the 20th century, and is highly ornate and decorated with a treasure trove of Orthodox artwork and icons.

The true treasures of the Church, however, are the tombs of the approximately fifty patriarchs who are buried on the site.  Among these is a niche for the tomb of St. Mark the Evangelist, the first Patriarch, although his body was removed long ago to Venice for safekeeping from the Muslims.  Tradition holds that at least some of Mark’s relic is still entombed here.  Alexandria’s two other greatest Christian saints, Athanasius and Catherine, unfortunately are also long gone.  After many years in Italy, Athanasius’ body was returned to Egypt but was re-interred in Cairo, while Catherine’s body was relocated to her namesake monastery near Mount Sinai.

The Coptic Orthodox Patriarchate is located in the heart of downtown Alexandria, a little more than a hundred miles northwest of Cairo.  It is open daily at 8:00am (closing times vary).  The cost of admission was not available as of this writing.  Web: http://en.egypt.travel (official tourism website of Alexandria)

Islamic Egypt has traditionally been among the most tolerant regions of the Middle East where Christianity was concerned, and far fewer Christian sites and communities have been decimated here over the years than in other places.  Alexandria still has quite a few, the most famous being the Monastery of St. Saba.  It was here that St. Catherine was martyred in the 1st century.  The marble block upon which she was executed is still here.  Other interesting churches include the Churches of the Annunciation and Dormition of Theotokos and the Church of St. George.